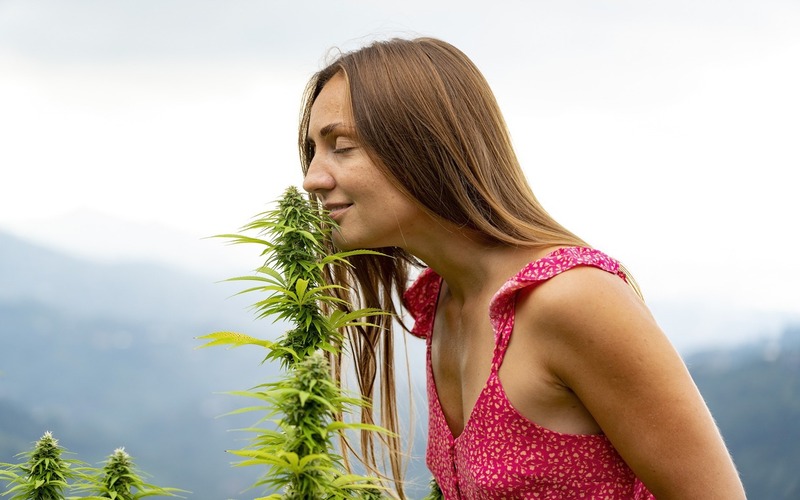 You may have heard about the compounds within the cannabis plant that give it smell, color, and taste but you probably didn’t know these compounds are split between flavonoids and terpenes.

In the article below you’ll learn exactly what makes each special to the plant and what effect they have on you.

Flavonoids are one of the most understudied elements in the cannabis plant. What we do know about flavonoids is the effect they have on flower.

This lesser-known compound is responsible for the pigmentation that flower gets from forest green colors to deep purple. It’s all controlled by the flavonoids in your weed.

They also have an effect on the aroma and flavor of your flower and flavonoids work pretty closely with terpenes and cannabinoids to have therapeutic effects on the body.

There are only 20 different flavonoids in the cannabis plant but they are all unique to that specific plant.

Flavonoids are rich in antioxidants so they help regulate cell activity and help protect against toxins in the body.

Both flavonoids and terpenes can be found in CBD as well.

Terpenes are similar to flavonoids in that they also control the scent and flavor of the cannabis plant.

There are a lot more terpenes than there are flavonoids though. About 100 different terpenes live in the cannabis plant and each type of plant has its own unique terpenes.

Terpenes can be found in flowers, herbs, and fruits, not just cannabis. It’s been studied to have wellness and therapeutic effects on the body.

How Flavonoids Affect Your Experience

The antioxidants contained in flavonoids heavily affect your experience when smoking cannabis.

Cannflavin A is a flavonoid that is responsible for decreasing inflammation in the body and studies have shown it might be stronger than taking aspirin for pain.

Cannflavin B is very similar to cannflavin A and has most of the same anti-inflammatory properties.

Cannflavin C is another flavonoid that has anti-properties similar to A and B and more research is being done on exactly how it interacts with the body.

Kaempferol is another flavonoid with anti-inflammatory properties but it also has antioxidant properties. It’s been shown to help with depression and could even reduce the risk of heart disease.

Quercetin is one of the most effective flavonoids in cannabis because it has antidepressant, antioxidant, antifungal, and antiviral properties.

Orientin is another well-rounded flavonoid that has multiple effects on the body. It possesses antioxidant, antibiotic, anti-inflammatory, and neuroprotective properties and this flavonoid can also be found in teas.

Sylmarin has antioxidant properties but it’s also been shown to have cancer-fighting abilities as well.

How Terpenes Affect Your Experience

Terpenes have a huge effect on the serotonin and dopamine systems in the body which is why some strains of marijuana will make you feel relaxed while others stimulate your creativity.

There are too many different terpenes to cover here but here are some of the more common types.

Myrcene isn’t included in all strains of marijuana and is more predominant in indica strains.

The terpene is responsible for lowering inflammation in the body and is commonly used as a supplement treatment to cancer.

Linool helps users feel more relaxed in their muscles and it can also reduce the feeling of anxiety or nervousness.

Humulene is a terpene that has a big effect on  regulating appetite and hunger. This is what could be leading to users getting the munchies after a smoking session.

Alpha-pinene has been shown to have an effect on the respiratory system and can even decrease inflammation in the lungs. It can be especially helpful with conditions like asthma.

Limonene is another terpene that is more popular with indica strains and it’s been shown to have an effect on patients that suffer from depression. The terpene is a deep sedative and helps patients relax when using it.

The Difference Between Flavonoids and Terpenes

Although flavonoids and terpenes both have effects on the body and can even function in similar ways, they aren’t always found in the same strains and there are a lot more terpenes than flavonoids.