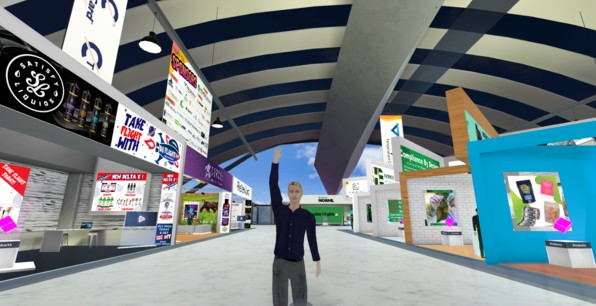 More dancing, more content, and more giveaways happened on Day Two of the Spring Emerge 2021 Virtual Cannabis Conference & Expo. In case you missed it, here are some highlights from our speakers. 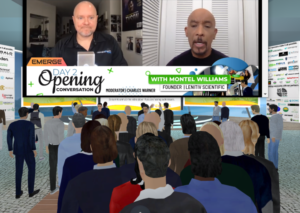 The second day of Spring Emerge began with a conversation with Montel Williams, award-winning talk show host and founder of Lenitiv Scientific. Williams has been a medical marijuana patient since 1999 when he was diagnosed with MS. Williams explained, “I started my advocacy because it felt criminal not to share the relief with others.”

Along with his personal experience with cannabis, Williams said now that cannabis is considered an essential business, we should be moving forward with research.

The cannabis community has known about the endocannabinoid system for over 30 years, yet many doctors still lack education on the subject. “We aren’t even scratching the surface of all the cannabinoids benefits,” he noted. Increased education, in Williams’ opinion, is the only way to move forward.

Spring Emerge is focused on sustainability and cultivation, but today had a technology theme as well.  One of the early sessions was “Energy Efficiency Challenges in Cannabis Cultivation with Gretchen Schimelpfenig and Mike Zartarian,” Schimelpfenig is the Innovation Institute Technical Director and Zartarian owns Zartarian Engineering.

Zatarian explained, “New stuff is coming out on the market at a dizzying speed. The price is coming down on lighting, HVAC, water costs, and treatment. This industry is exploding and it’s taken a couple of years for other industries to catch up, and now we’re starting to see the equipment they’ve been working on for two or three years.”

The panel “Future of Cannabis E-Commerce” with Alexander Lipnik, Director of Marketing and Partnerships at AeroPay, covered how cannabis will look in the future. Not only will cash-only businesses be a thing of the past, but once there is a way for banking to be done securely, dispensaries and other cannabis businesses will be creating much more capital.

Changes in the Market

As cannabis is legalized in more and more states (shout-out to New York! Congratulations on recreational legalization!) the innovations within the market get even more involved.

In the “Unmasking Cannabis Flavors for Full Plant Potential” session, speaker Guy Rocourt, co-founder, president, and chief product officer of Papa & Barkley spoke about the true effects of cannabis and how the entourage effect plays a major role in the uptake of cannabinoids. 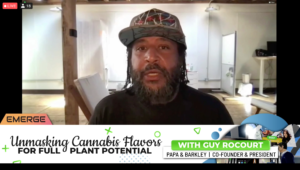 Rocourt said, “So, a plant was placed on Earth that works directly with the endocannabinoid system. This doesn’t seem like a coincidence to me.”

As companies conduct more research on the effects of cannabis on the body, the products they create will ultimately be better for consumers. Happier customers leads to repeat business, reminded Rocourt.

In a similar session, “The Science Behind Creating Cannabis-Infused Beverages” with speaker Dr. Harold Han, founder & chief science officer at Vertosa, discussed cannabis emulsion and how it works when ingested.

“Initially, I didn’t get the enjoyment from cannabis. But, I kept learning and kept trying and realized this plant is doing better for me than harming me. I want everyone to feel the feeling that I felt with his plant,” Dr. Han explained.

As he worked with cannabis emulsion, he realized that after trying over 200 different techniques, some work better for different people. This has changed how his company works with cannabis and drinks. 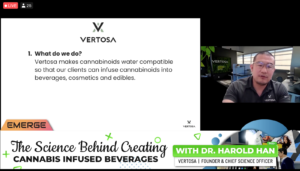 Dr. Han is the chief science officer for Vertosa.

Perhaps one of the most anticipated moments of the event, the Investor Pitch Contest lets the final four contestants pitch their company to three judges. This spring we had Jeanne Sullivan, CIO of Arcview Ventures, Kellie Seringer, founder and portfolio manager of Symmetry Capital Management LLC, and David Hess, co-founder and President of TRESS Capital LLC.

The winner of the contest will receive access to a funding pool so they can continue to make moves within the cannabis industry.

This time the winner was a tie between DAMA and Hala Hemp. Hala Hemp is a CBD/hemp company created by Mahala Herron. Hala Hemp focuses on corporate, environmental, and social responsibility. The company has so far been recognized by Chelsea Handler, Tyson Farms, and Viola after their first batch of products sold out of all of their tinctures and half their bath bombs.

DAMA Distributing, presented by Cole Gibson, is a sustainable packaging company determined to cut out single-use plastics and achieve carbon neutrality. DAMA uses fully recyclable materials and if someone just tosses the containers on the ground (hopefully they don’t) the container will bio-degrade.

The last day of Spring Emerge will be bittersweet but surely filled with even more awesome content. Beginning with a conversation with the one and only Salvador Santana, tomorrow is sure to be a blast. Let’s hope for another flash mob!

Tickets are still available at https://emergecanna.com/get-tickets/.