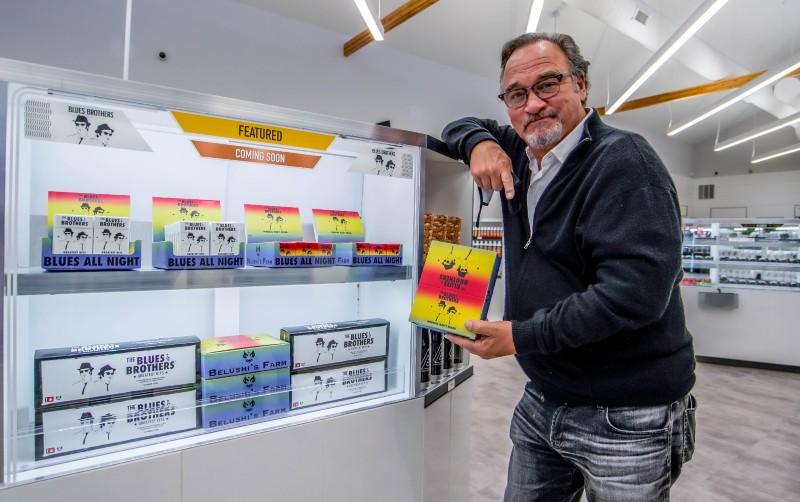 Multifaceted actor and musician Jim Belushi, known for his work on Saturday Night Live and According to Jim, utilized his comedic chops on television and film to bring joy to people all around the world.

Many could argue that his successful trajectory from a comedian to cannabis cultivator makes a lot of sense.

In the same way that humor is often used as a coping mechanism, cannabis has a long list of healing properties that can bring people healthy relief.

Belushi confessed on Late Night With Seth Meyers that his venture into cannabis farming, “happened totally by accident.”

Belushi explains that in 2015, when he bought the for-sale 80-acre Oregon farm that resided behind his property, it just so happened that his state legalized cannabis just that year.

Since then, Belushi’s Farm is home to 93 sprawling acres along the Rogue River and offers a variety of products cultivated by a seven-person team using premium sungrown genetics.

After undergoing his own enlightening journey with cannabis, Belushi has been an outspoken advocate for those relying on the healing properties of cannabis to improve their quality of life.

As an advisor for the Last Prisoner Project, Belushi also fights for the release of cannabis prisoners and raises awareness of racial disparity in cannabis incarcerations.

At the Emerge Virtual Cannabis Conference, Belushi led a captivating panel breaking down advocacy and equity in the cannabis space.

Now, as a resounding voice in the cannabis industry, Belushi uses his products and influence to promote healing and positive change.

On Oct 5, it was announced that the Veteran-founded The Green Solution, which is one of the first recreational cannabis companies in the nation, have partnered with Belushi and Belushi’s Farms to debut The Blues Brothers pre-rolls in the state of Colorado.

The pre-rolls, which are a tribute to Belushi’s late brother John, will be available in packages of six .25-gram pre-rolls and five .7-gram pre-rolls, as well as a single one-gram pre-roll that can be purchased in select TGS stores.

Kyle Speidell, who is the co-founder and co-president of TGS, emphasized that their collaboration with Belushi wasn’t just a celebrity-endorsed brand.

Speidell explains by saying that Belushi is a passionate supporter of veterans’ causes which is something that aligns with The Green Solution, being that they are a veteran-owned company.

“In addition to his comic and music talents, Jim Belushi has developed an exceptional cannabis product through Belushi’s Farm and we couldn’t be more excited about being the first to welcome them to Colorado,” said Speidell. “Jim is a skilled cannabis producer and is involved in everything from farming to production.

According to the press release, the first TGS locations to carry The Blues Brothers pre-rolls in Colorado will include 470 Malley Drive in Northglenn; 4400 Grape St. and 995 Wewatta St. in Denver; 3179 South Peoria Ct. in Aurora; and 4151 East Kentucky Ave. in Glendale.

“The Green Solution is the top cultivator in Colorado and their mission of healing falls right smack in line with the Blues Brothers’ belief in the power of cannabis: music, mischievousness and, as they say in the movie, “a Mission from God.” We will be bringing our mission, our harmonicas, and the original Blues Brothers music to the stages of Colorado soon. Let’s all celebrate,” said Belushi.