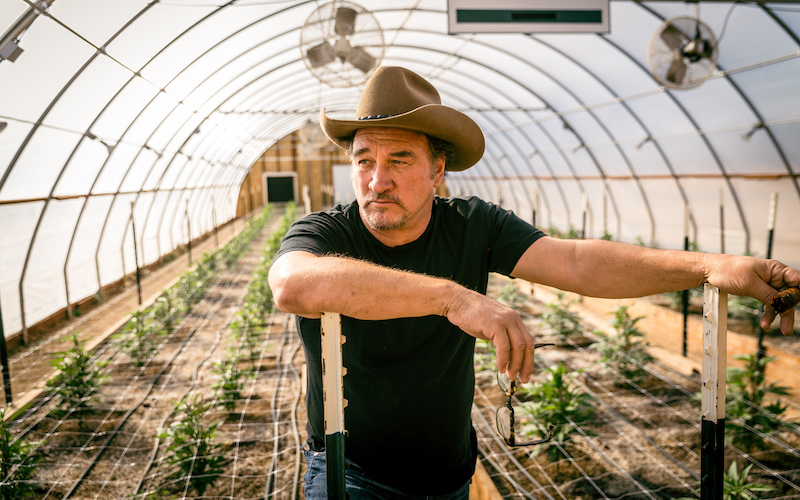 Charismatic actor and musician Jim Belushi takes us on a journey of discovery, healing, and cultivation in this exclusive interview.

A gentle rain thumped down on the roof of our ATV as Belushi hit the gas and accelerated toward a large, wooden barn across an open field. His property stretched around us as we neared the end of our tour of his expansive farm.

We stopped at the edge of his property line and gazed up at a historic barn, its beams standing stoically amid tangles of blackberry bushes. We passed through a small, unlocked fence. “I have to keep this open because it’s county property, so they have a right to cut through here and go down to the river – which is cool,” Belushi noted. The rain intensified and suddenly we were running. 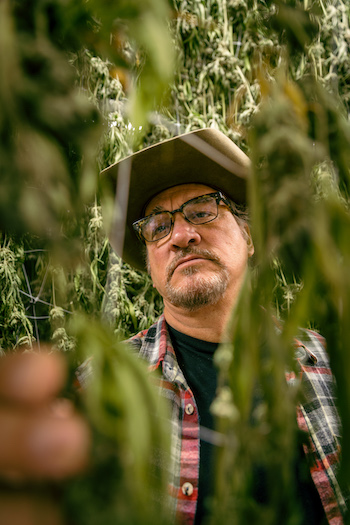 I tailed him through the field and watched as he gracefully scaled an iron gate near the barn’s entrance. “Can you climb a fence?” he asked while extending a hand from the other side. I was already halfway over, awkwardly stumbling to maintain an air of professionalism while straddling the damp, groaning gate.

We entered the barn, and the smell of dust, old oil, and rat droppings wafted through the air. The rain outside fell in thick sheets, creating a deafening rumble against the tin roof. Inside the barn, rusting machinery, empty bottles, and thick spiderwebs filled the cathedral-like structure. It looked like it hadn’t been touched in a hundred years.

Belushi pointed out various objects around the barn and we speculated as to what purpose they may have served. A nut sifter? A wheat thresher?

He beckoned me to follow him up the narrow wooden “staircase” that was just shy of being a ladder to the upper floor. The floorboards hardly groaned under our steps. Amid the dust and debris was a 4×3 opening where one could view the fields, the cows, the mountains in the background, and the ever-present blackberry bushes, dotted like small islands among the green grass.

Still, the sound of raindrops hammered down around us. Belushi gazed out at the field. I’m reminded of where we stood half an hour earlier, in his gorgeous red barn, clean, modern, and luxurious in comparison to this utilitarian relic.

Belushi’s Farm is a sprawling 93-acre property, with outbuildings and guest houses dotting the landscape. It’s nestled neatly next to the Rogue river, the same river which Belushi uses to water his crops and create steam for his sweat lodge.

His grow operations are mixed, with some plants in greenhouses and others inside, and a few in outdoor planters near the greenhouses. The sound of music drifts over loudspeakers in the grow rooms, humming a sweet tune to his “girls” to welcome them to the world.

While exploring the property, we stood on the top floor of his new barn next to six tall cannabis plants. “Smell this, touch it,” he implores. “Lemon Chiffon,” he says with a smile. Later, he explains that it’s a strain with unusually high myrcene content from Bend, Oregon. It’s strong in limonene as well, sticky and fragrant. 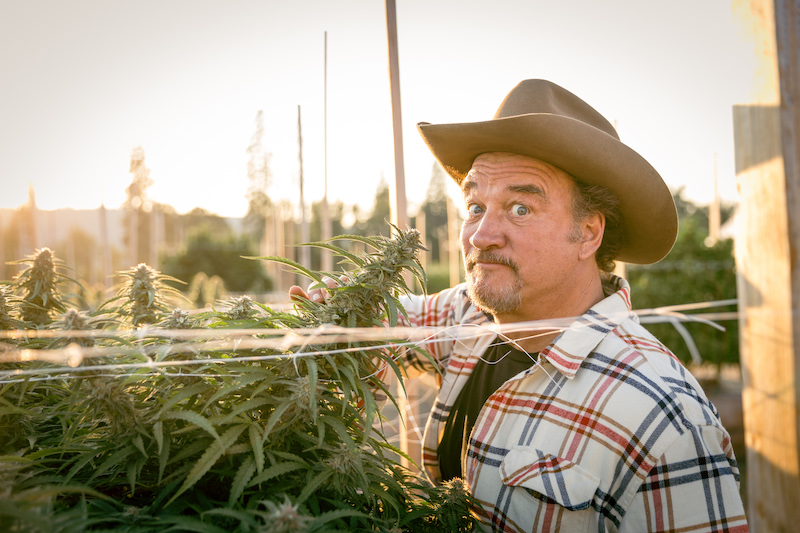 I’m trying my hand at my own grow this year, so I remarked how complicated the whole process seems to be. Belushi replied in his laid back way, “They’re like a cat, just take care of them everyday.”

He threw open the double doors of the hayloft and a wave of cool air flowed in. I’m tempted to dangle my legs over the side, but instead Belushi leans over to show me a video on his phone of a toddler scuttling across a hardwood floor, his bare bum shamelessly wagging behind him.

It’s calving season and all the calves are strewn about the field, looking quite content. Belushi quotes a Dylan Thomas poem about an aging man who no longer “stumbles drunk as a new dropped calf,” but instead has grown steady and sure. He speaks of the feminine power of the farm and its “incredible, life-affirming vibrance.”

From our vantage point in the hayloft, we could see the old barn just beyond the edge of his property. As the rain clouds moved in, he shared the history of the aging structure: “That’s part of the county’s property. It was gifted to the county by a guy named Griffin. In those barns, nothing can be touched in there. There’s like, a horse and buggy thing in there, which – we’ll take a quick look if you want. It’s cool s***.”

Eventually, when the rain subsides and we have our fill of the old building, we return to the house to throw axes by the river before dinner. An eagle flies overhead and Belushi gasps: “That’s how you know it’s an eagle, if you gasp when you see it.” 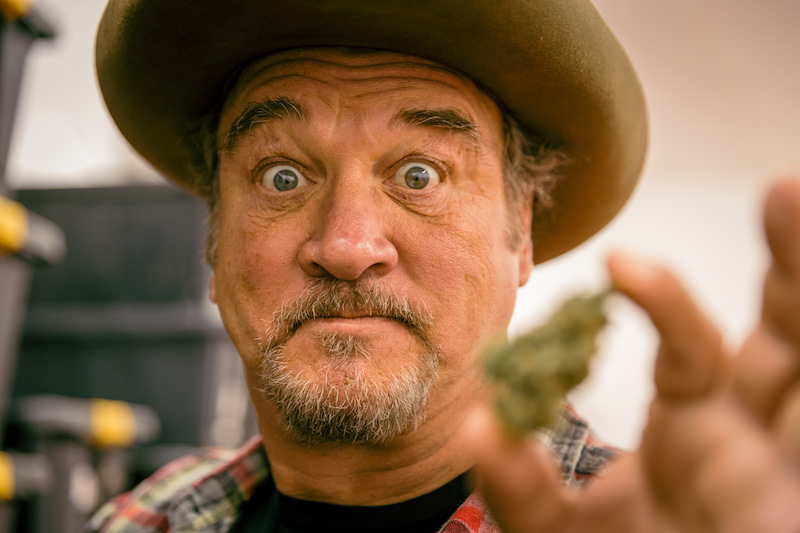 As Belushi prepares dinner with his wife Jenny and cousin Chris, I ask how he translates his experience as an entertainer to the work of a cultivator and farmer. To my surprise, he responded quickly, “Well, same skill set.”

“You take all those words, you put them on a page, and you start reading it. And you start getting a sense of who this guy is, where his energy is. Then you start…” Jenny pours me a glass of red wine before he continues.

“Then you start going into creating deeper history, and thickening, and understanding…” Belushi trails off as Chris inquires as to what time dinner will be ready and whether the potatoes will be cooked in time. The three of them, Belushi, Chris, and Jenny, dance around each other in the open, wood-finished kitchen. The Rogue river burbles blissfully behind them, visible through a large window over the kitchen sink.

“It’s the same thing here,” Belushi continues. “You start looking at understanding all the adverbs around it: healing, medicine, terpenes, THC, CBD, CBDV, CBD1, CBD2, myrcene, pinene. I mean, look at them all and you start getting the feeling. And then with that feeling, you start to explore the history.

The cooking was reaching a crescendo now as the different components of a mouth-watering dinner came together: barbecued chicken, ribs, confetti corn, sweet potatoes, and a gooey toffee dessert. Captain Jack, Belushi’s friend and expert cultivator, arrives promptly at seven to join us for the meal. As he’s welcomed with hugs and wine, Belushi tells me about his preference for ingesting the plant.

“The Black Diamond [his strongest strain], I won’t go near it. I can look at it,” he laughs. “I think the number one thing that audiences for cannabis are interested in now is how to control their experience… When someone offers me a joint, I don’t take a hit from it ‘cause I can’t control the experience.” 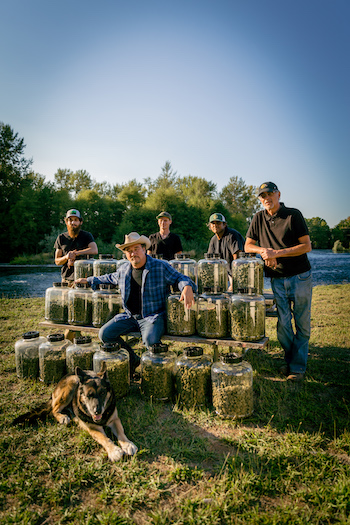 The smell of barbecued ribs wafts from the oven as Belushi continues. “Now, if they say, ‘Oh, this has 18 percent THC and four percent terpenes,’ I’ll say, ‘Oh, let me take a hit,’ because I know what that experience is.”

Belushi’s cannabis strains have result-oriented names – “The Marriage Counselor,” “The Patient Parent,” or “Ice Pack” – to let consumers know how the product will make them feel or how it will help with a particular ailment.

He explains, “People know what they’re going to feel after one glass of wine, two glasses of wine, three glasses of wine. So with marijuana, the new consumer is afraid. They’ve had a bad edible experience, or they smoked six percent THC Mexican ragweed in the 70s and the new stuff is 25 percent THC and they get scared… But when people ask me why I smoke Cherry Pie [his favorite strain], it’s because I’m not scared that I’m going to drop out of the conversation or I’m going to pass out on the couch. It’s a social strain and the only problem is you might talk too much because you feel so good, and you’re very articulate.”

When asked about new technologies impacting the cannabis industry, Belushi says he takes a more traditional approach to farming. “Technology is something you use to make things more efficient. Like today, we were talking about heating the flowerbeds to keep them at a nice, warm temperature so we can actually plant a little earlier. And maybe if we want, a little later so the beds would still maintain 45 to 60 degree soil… But to me, the real technology comes into all the testing and the breeding.

“A genetics company tested our stuff and said, ‘Wait a minute. You understand that this is a very unique strain, genetically?’ So we talked and had a long discussion about creating the DNA for this Captain Jack strain [Gulzar Afghanica], and creating the mother strain so we can ship cell cultures. What we would like to do next is solidify and stabilize that strain so we’ll be able to ship it to partners in other states.”

His decision to start the farm took time, and it wasn’t necessarily with cannabis in mind. After taking a dip in the Rogue many years ago, Belushi started a journey that ultimately led him to an old Elk’s Lodge. He’s transformed the lodge into a gathering place for the community and a gorgeous place to cultivate cannabis. 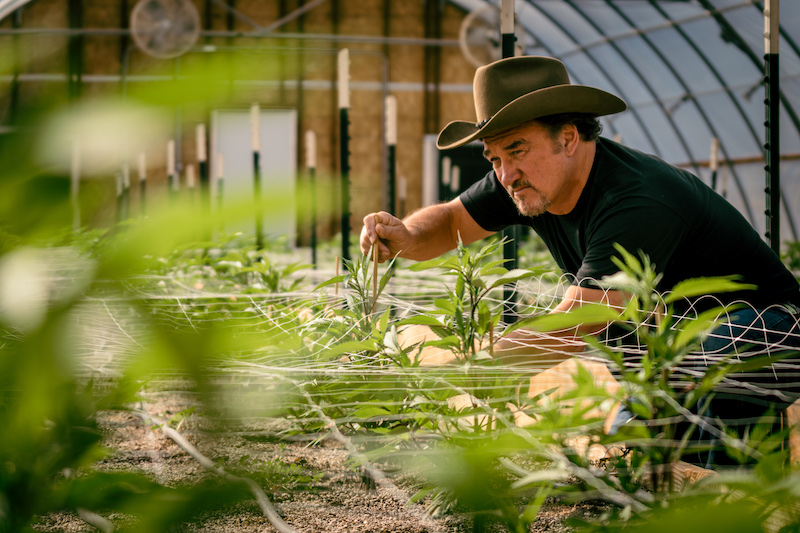 He didn’t have any grand ambitions when he began cultivating. He explains, “My friend Jeffrey Iverson and I started growing some marijuana just because it was legal. I got deeper into the plant and understanding it and started meeting with people with medical problems and watching them transform.” Belushi’s Farm products are now offered at dispensaries throughout Oregon and their reach is growing as he expands the brand to include new products and new markets.

Belushi’s journey has been a winding one, his acting career taking him all over the world and his work with the Blues Brothers keeping him in touch with his Chicago roots.

While discussing his acting career, Belushi said of his experiences: “I’ve traveled the world with movies. I did Oliver Stone’s Salvador, which was terrific. I worked with Michael Mann, Roman Polanski, Ed Zwick… I was talking to Chris [Belushi’s cousin] about it the other day and I said, ‘I’ve had so many great experiences that if something were to happen to me today, I’m like, fine, man.’ It’s crazy, you know. I’m having fun on this farm. I’ve been really blessed. I’ve really been enjoying this life.”

The farm is often referred to with deep reverence, like it was a gift he received rather than a property he purchased. Belushi’s magic is in the way he looks at his world, as if the experiences and people in it are there for a reason. During a brief follow-up interview, Belushi shared his perspective on gifts:

“Cannabis is another one of those gifts. It’s a gift that I just fell into. There’s this thing in improvisation called ‘explore and heighten.’ It’s like what you [the author] and I really did well together. We jammed, we went to explore that bond. Now, we heighten the experience by going, ‘Let’s go a little farther. There’s a fence. F*** it, let’s climb over it.’ Now we’re exploring more, we’re heightening the experience… and it opens the possibilities.

“So, I just planted some marijuana and it’s just taken me on this journey of joy, of healing, of community, and to all the people I’ve met. From the veterans who are suffering from PTSD and missing parts of their body from bombs, and how it brings them peace and helps with pain. All the way to sitting around with [friends] laughing and giggling and releasing endorphins and joy. I mean, it’s just… wow, another gift.”