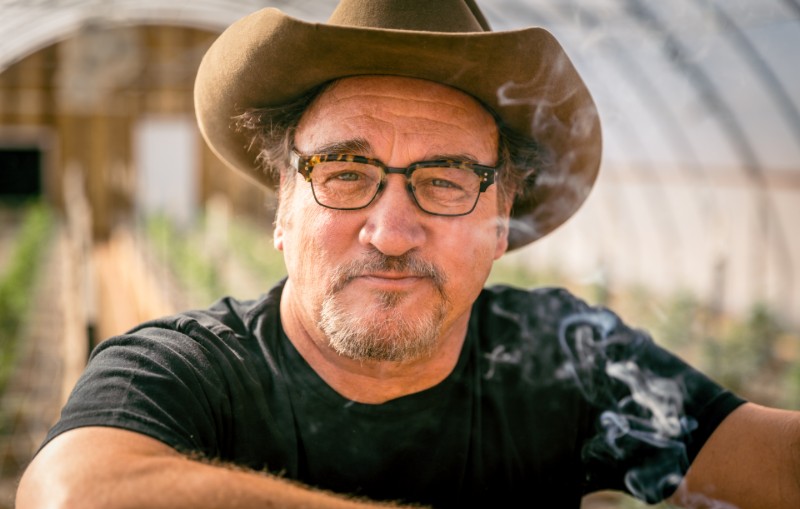 The talented and versatile Jim Belushi is a man who refuses to be defined. His career has taken him from sketch comedy on Saturday Night Live to television and film stardom to playing the blues with Dan Akroyd in the Blues Brothers.

His latest venture is less public, blossoming in a small town in southern Oregon on a 93-acre farm. The actor-turned-cultivator is now the proud owner of Belushi’s Farm, a combination of indoor and outdoor grow operations focused on flavor, hand-tended care, and experience-based product lines.

During our tour of his farm, we asked some pointed questions to the multi-faceted Belushi and followed up a few weeks later with some of our more burning questions, like whether he ever smoked with Tupac Shakur and what his favorite roles were. You know, the important stuff!

In this extended and exclusive release, Belushi shares his thoughts on acting, farming, and how his brother John could have benefitted from cannabis to treat his sports-related injuries.

Charles Warner: You’ve been in so many great movies. Do you have a personal favorite?

Jim Belushi: I get that question all the time and it’s really hard because as an actor, the depth you have to go to to develop the character, you’re such a blend of that character and yourself.

You leave a little piece of your heart in every movie, whether it’s a good movie or a bad movie. It’s like children, you know. Which one do you love best, you know? But, if I have to pick, About Last Night was probably my favorite.

That’s the one that made me a movie star. It comes from a David Mamet play, very well written. It just changed my life. But, I had fun with the dog in K-9. And I had a ball with Arnold [Schwarzenegger] in Red Heat. I did Oliver Stone’s Salvador, which was terrific. And then I worked with Michael Mann in Thief, I’ve worked with Roman Polanski, Walter Hill, Ed Zwick, Francesco Rosi… Honestly, I love every movie I’ve made, like I love my children.

I was talking to my cousin Chris about it the other day, and I said, “I’ve had so many great experiences in this industry and in life that, if something were to happen to me today, I’m like, ‘fine man.’ I’ve been living good.”

I’m having fun on this farm. I’ve been really blessed, I’ve really been enjoying this life.

Charles Warner: What was it like working with Tupac in Gang Related?

Jim Belushi: I loved that character. I got to play a bad guy. The thing about playing bad guys is they don’t think they’re being bad. They really believe they are doing the right thing. It’s cool.

Tupac, as a man and as an actor, was one of my favorite partners that I ever worked with. 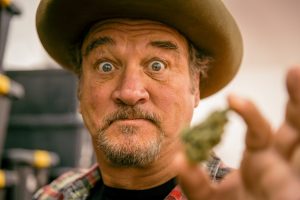 Belushi has acted in more than 155 film and television titles and is currently focused on growing his cannabis brand.

And what was beautiful about our relationship was that we were both musicians. We had great discussions about all kinds of music.

And can you believe that he didn’t know Frank Sinatra? I played all the Frank songs for Tupac. He was blown away.

We actually tried to write a rap song around Fly Me To The Moon. But then, at the end he said, “This is so perfect melodically, you can’t break into it. We have to leave it alone.”

We had a good time together. We would never talk about the scenes beforehand, we’d show up, come to the set for some basic blocking, [Jim Kouf, director of Gang Related] would go, “Action,” and we would just go.

I would come into the scene a little strong, and Tupac would fill in like a bass player to my lead guitar. He would support my energy, my rhythm. And then in the next take, I would pull my energy way back, and he would pull up like a lead guitar or a lead vocalist, and I would support his run.

Then we would do trades in the middle of the scenes. I would be up and he would pull down and he would come up and I would pull down. We were jamming. It felt improvisational. It was musical, theatrical, and joyful. We had this clean, thick cable of energy between it. It was magic.

Charles Warner: That’s one of my favorite movies and I’m a big Tupac fan. It just really came through, the chemistry was really strong.

Jim Belushi: And he was a pro, he was on time, he had his lines memorized. He was polite, he was a gentleman. He passed away ten days after we finished the movie and it just broke my heart.

He was on his way to being an even better actor. I think he would have really grown into a big actor.

Charles Warner: It’s such an awesome movie, one of those classics you can always go back and watch. Like you said, great acting, great characters, and great rhythm.

Jim Belushi: Right around that time, when that movie came out, there was a gang-related shooting at a movie theater in Los Angeles. That just ruined the opening of that movie. Everyone was afraid to go to the movie theatre, especially with the title Gang Related. Nobody went. But plenty of people saw it on TV or DVD.

Another movie came out just before Gang Related that had to do with gang violence. I can’t remember the details. And so the audience was worried because Tupac was affiliated with rap and the West Coast. Regardless, it’s become kind of a cult film since its release.

Charles Warner: Did you get a chance to smoke with him?

Jim Belushi: No, we didn’t get high together. I never use cannabis for my work.

It’s my natural endorphins, adrenaline, organic process of joy. So, I don’t even have a beer, like I said, during creative sessions, writing sessions, pitch sessions. I think cannabis can be very useful, and I know it was very useful at Saturday Night Live.

For me personally, no, I choose not to. That’s not to say that some very funny and creative stuff hasn’t come out of hanging out with friends and smoking Captain Jack’s weed that ends up in scenes or sketches.

I love acting, I love music, and I love musicians. Non-verbal, deep waves of communication on stage. There’s so much engagement and magic. That’s why I love the blues.

It was a gift that Danny Akroyd and my brother gave me twenty five years ago. Danny made me join the Blues Brothers, against my will. Against my protest, Danny dragged me in and taught me the blues and I am so grateful.

When I’m on stage with Danny and we’re doing Sweet Home Chicago and I look at the crowd and I have the music lifting me like an F16, those engines roar and I just ride on top of this jet with these musicians, Texas musicians that play beautiful Texas blues.

I ride up over the audience and I’m singing and dancing, I’m in my body and in my joy and in my heart and look up at the sky and I go, “I see now, John, thank you for the gift.”

The Blues Brothers is one of the many gifts my brother John left me. It’s changed my life for twenty five years, that joy. Like cracking open my chest, pulling back the rib cage, reaching in and pulling my heart up into the air and going, “Ah! I’m free.” It’s beautiful.

Cannabis is another gift. It’s a gift that I just fell into. I was explaining this theory to my cousin Chris, there’s this thing in improvisation, it’s called “explore and heighten.” It’s like what Trish [Patricia Miller] and I did well together- we jammed. We went to explore that bond.

Patricia Miller: That was so magical! 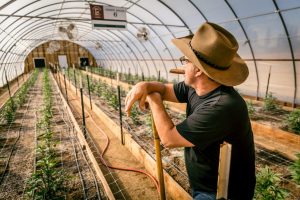 Belushi stops to assess his crops in one of his Belushi’s Farm greenhouses.

Climb over it. We explore more, we’re heightening the experience, because now it’s raining. Now we can’t get the barn door open, we push harder.

Everything gets heightened as long as you make that entrance, take that risk. But if you say, “It’s raining and I don’t want to get out of the car…” Well, you just stopped the excitement of discovery.

So, I just planted some marijuana and it’s just taken me on this journey of joy, of healing, of community, of all the people that I’ve met.

From the veterans who are suffering from PTSD, and how it brings them peace and helps with pain and helps them re-bond with their families.

All the way to sitting around with friends and laughing and giggling and releasing endorphins and joy.

Patricia Miller: It definitely felt like a gift to me.

Jim Belushi: Right, wasn’t it fun? We shared a nice “explore and heighten” together.

Patricia Miller: I definitely felt heightened. One last question, Jim. Something that I was curious about and that’s been coming up a lot in our interviews with athletes is they’re working to get cannabis more involved in sports medicine. You mentioned that you think your brother John may have suffered from chronic traumatic encephalopathy.

Patricia Miller: With that in mind, how do you feel about athletes trying to get the NFL to start using cannabis as medicine for similar issues?

Jim Belushi: The NFL is a very successful business. And it continues to be successful. It’s very hard to get them to open their minds as to how to run their business.

I’m hoping that now they’re sensing the sea change. There are politicians and at least four Democratic candidates for president who are supporting the federal legalization of marijuana and removal of cannabis from Schedule I classification.

Scientists are seeing great things happen in CBD therapy. I think the NFL is under the gun for CTE and how they’re going to protect their players, so I’m hoping there’s a window for them to say, “Hey, we do care about CTE, and cannabis is one of the things that can help,” and then they can finally allow their players to use cannabis in protection and healing.

I think that day will come, but until the federal government changes that Schedule I classification, there are a lot of big corporations that cannot take the risk.

There are also a lot of doctors that cannot take the risk of doing research in fear of losing their federal license. So once that changes, it will open up.

And I believe it will open up soon. I have hope.

To read more about Belushi’s journey from actor to cultivator, read his cover feature in the summer 2019 issue of Cannabis & Tech Today.