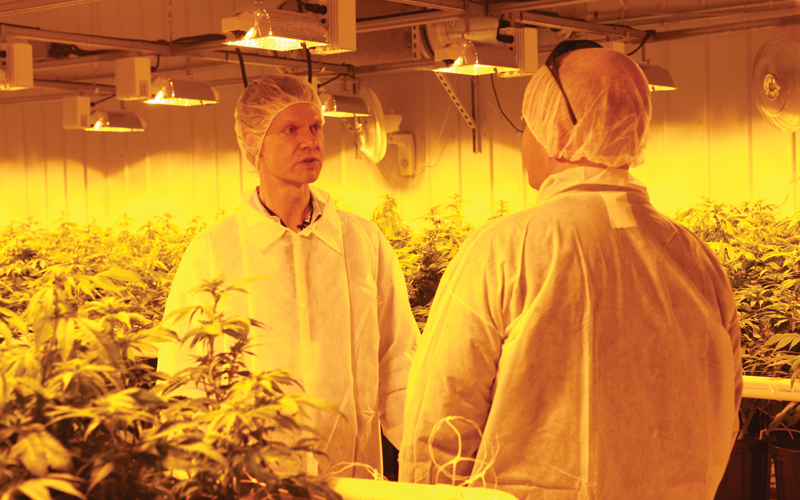 The Meteoric Rise of Aurora Cannabis, One of the World’s Largest Medical Cannabis Companies

There are few companies that have experienced such rapid growth as Aurora Cannabis. The publicly traded juggernaut started selling medical marijuana from its headquarters in Cremona, Alberta in 2016. Since then, its operations have spread to 23 countries, allowing the company to claim its place as the second largest producer of cannabis on the planet.

Their diverse array of acquisitions and assets have given Aurora incredible production potential, with their peak annual output estimated to reach between 700,000 – 1.2 million kilograms a year with their current projects.

Their gregarious and charismatic frontman, Chief Corporate Officer Cam Battley, touts the company’s achievements with the same enthusiasm one would expect from a boxing promoter. Yet he does so with the eloquence of a man who spent his career working in medicine. His background in bio-pharmaceuticals gives Battley an air of confidence that’s backed by an expansive knowledge of industry best practices. We spoke with Battley to learn more about the company’s ambitions, the importance of technological innovation, and the role of sustainability in the emerging market. 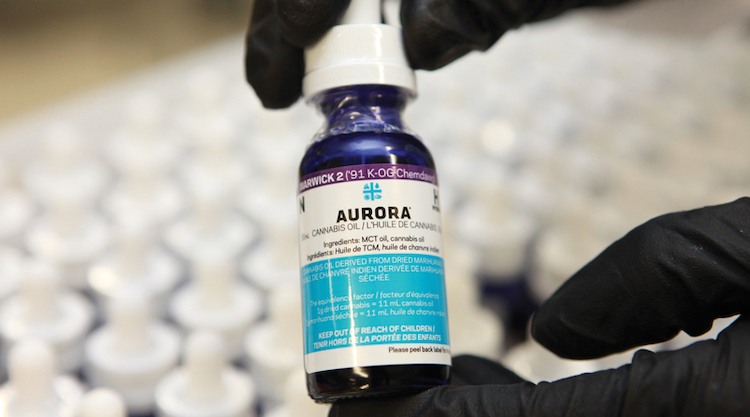 Cannabis & Tech Today: Why is Aurora so hell-bent on world domination?

Cam Battley: Well, that’s an interesting way to put it [laughs]. We have a unique, unusual, and very exciting opportunity here. That’s a bit of a happy accident, in that Canadian companies have established a position of world leadership in the cannabis space.

It happened because several years ago, back in 2013, the Supreme Court of Canada ordered the federal government to create a truly accessible medical cannabis system. Canada had one system or another for legal medical cannabis since 2001, but the prior systems were not working for patients.

Then in 2015, the Justin Trudeau liberals were elected and confirmed they were going to legalize cannabis for consumer use with the central objective of migrating consumers away from the very large black market into a legal and regulated market.

Because of that, since about 2014, we’ve seen the emergence of some very strong leading companies in this sector. And at the same time, because cannabis is now legal nationwide in Canada on both a medical and a consumer basis, that’s given Canada a real lead globally. We’re the second country after Uruguay to legalize cannabis for consumer use.

Alternatively, in the U.S. cannabis remains illegal on a federal level. So you have this unusual situation where there are more than 30 states with medical cannabis, you’ve got more than 10 states with legal consumer cannabis, but it remains illegal on a national level. And that creates certain constraints for U.S. companies. And what that has meant for us is that as we expand around the world, we now have the largest global footprint of any cannabis company. We’re operating in 23 countries.

We are not running into U.S. competitors, or competitors from any other country, as we enter market after market for medical cannabis. It’s been a very, very fast pace. We sold our first gram of medical cannabis three years ago, in January of 2016. And since that time, we’ve been the fastest growing cannabis company in the world in terms of registered patients here in Canada, in terms of revenues, and in terms of the creation of shareholder value.

C&T Today: What technological innovations made the most impact on the efficiency of Aurora and helped you to grow so quickly?

Cam Battley: It’s been a really interesting story of differentiation for Aurora and there were two key reasons why I decided to come to Aurora from another cannabis company in March of 2016. The first was our CEO, Terry Booth, whom I felt was a visionary and I thought he had the clearest strategic vision as to where the cannabis market, not just on a Canadian basis, but on a global basis, was likely to head.

The second reason is very specific to your question. And that is that Aurora built the first purpose-built cannabis production facility in the world, about an hour north of Calgary – Aurora Mountain. So this was the first facility to my knowledge, anywhere in the world, that was built specifically for the cultivation of cannabis. And it wasn’t a retrofitted warehouse or greenhouse.

Building a facility like that, just for the cultivation of medical cannabis to GMP standards, resonated with me as a career bio-pharmaceutical guy. We have since really doubled down on the purpose-built concept. The latest fruition of that of course is our Aurora Sky Facility at Edmonton International Airport.

C&T Today: I understand Aurora Sky is the largest cannabis facility in the world. How do you use automation to streamline its output?

Cam Battley: It’s very distinct from what all of our peers are doing. All of our peers that are building a very large capacity in Canada are retrofitting existing greenhouses. And that has certain advantages. It takes less time to retrofit a greenhouse than to purpose-build a massive indoor facility with precise environmental controls.

We see very distinct advantages to the cultivation and production strategy that we’ve pursued. Aurora Sky is not a greenhouse. It is a massive indoor facility with a glass roof, so it’s a closed system with positive pressure, just like in pharmaceutical manufacturing.

We have 100 percent control over all the critical environmental variables ranging from lighting to temperature to humidity to CO2 to the nutrients. And that allows for a remarkable level of production efficiency per square foot. 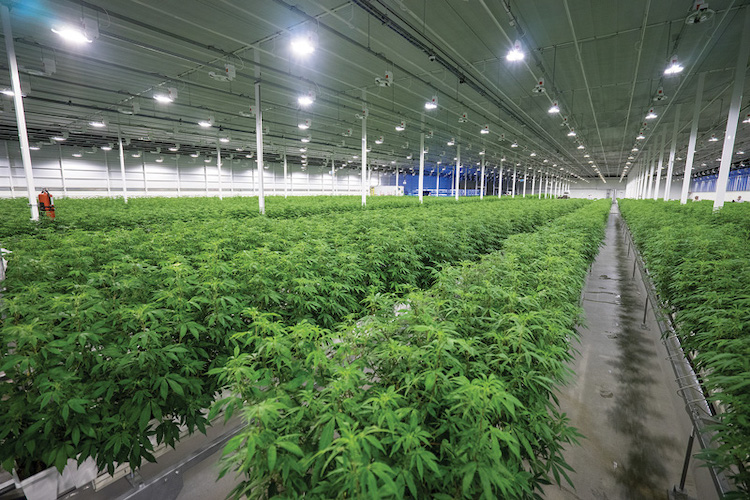 Aurora Sky has a full production capacity of over 100,000 kilograms per year. So we’re looking at about 20 times the output at Aurora Sky. The interesting thing is it only requires about three times the number of people to manage that facility. So we have 125 people working at Aurora Mountain. We have 400 people working at Aurora Sky. So three times the people and 20 times the production. And that is due to the design of the facility and the remarkable level of automation, including robotics, that we built into it. We don’t have people managing the plants in the flower rooms. We have 17 flower rooms at Aurora Sky, each of which is 34,000 square feet, and there are no walkways for people to move up and down the rows.

So we’ve reclaimed 25 to 30 percent of the space that would be allocated to walkways in a traditional greenhouse. We have the robotic crane that picks up entire tables full of plants and moves them to the central corridor, which runs 750 meters down the spine of Aurora Sky. And then the tables are placed on a conveyor that carries them to the harvest area. And there again, we have a high level of automation associated with cutting, trimming, drying, and bottling the plants. We believe that we have truly invented 21st century cannabis production.

C&T Today: Efficiency can really go hand-in-hand with sustainability. What responsibility do the major players, like Aurora, have in fostering sustainability within the industry?

Cam Battley: One of the things that we’re doing is creating this mass production that is incredibly efficient compared to the black market, in terms of power use. Because in the black market, of course, you have a very large number of small underground grows, so the efficiency of power usage is much less.

By consolidating production into these very large facilities, we’re using less power overall. We’re also doing other things. By having these indoor facilities with a glass roof, it allows us to harness the power of the sun so that we’re not simply relying on lights. We do have just as many lights per square foot as in our indoor facilities, but we don’t need to use them all the time because we have this glass roof.

The glass itself is very special; it’s not traditional greenhouse glass. It’s specialized glass that diffuses the light as it passes through. It does not let the light escape, so it’s one way. By diffusing the light, it ensures there is even exposure in terms of micromoles across the entire canopy.

We’ve also invested in a strategic partner, a small company called Micron Waste Technologies. They’ve invented a digester for organic waste. It can digest anything that the human body can and we’re collaborating on research to make sure that we can break down the tough fibers of cannabis. Disposal of cannabis waste has been a challenge for the cannabis industry, not just in Canada, but globally.

Composting is also suboptimal because it can take a month or two for the waste to actually break down. The digester can completely digest cannabis waste in 24 to 48 hours. That is a major innovation. Something we try and do across the value chain is find great companies with great technologies and partner with them … I find that incredibly gratifying.

Security, Chain of Custody, and The Transportation Manifest

Living in the Age Of Cannabis Delivery on Demand