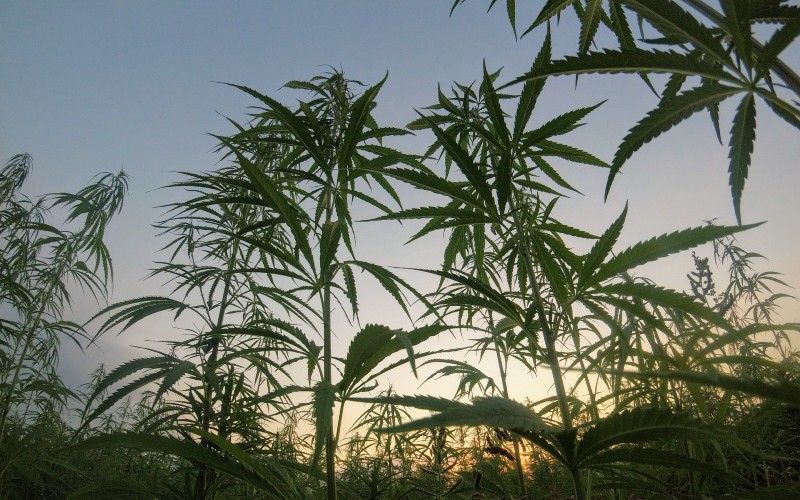 Over 2,000 cannabis plants with an estimated street value of approximately $1.5M were air lifted by helicopter out of a public nature preserve in San Diego, California last Wednesday.

The pot plants were discovered in Rancho Peñasquitos, a suburban community in the northeastern part of the city of San Diego.

The community is named after the first Mexican land grant in the county, Rancho Santa Maria de Los Peñasquitos.

Police officers were initially called to the scene due to a homeless encampment.

Upon site, they discovered 5-to-7-foot high, fully-flowered pot plants that were ready to be reaped.

The plants were camouflaged below the canopy of the native flora.

The scenic nature preserve offers a variety of vegetation.

The dirt road trails also appear to be a favorite recreation area for scores of local mountain bikers, with pedestrians pausing to give the right of way to the cyclists.

Such a well-traversed area is generally not the best place to hide an illicit grow.

“In a city area to have an outdoor grow of his magnitude is extremely uncommon. We see these frequently in the backcountry,” said Sgt. Mark Knierim, Group Supervisor of the DEA Narcotics Task Force Marijuana Eradication Team.

It is unknown if any seeds were inadvertently scattered during the marijuana plant remediation process, which may cause a new cycle of pot plants to sprout.

“We found a secondary area. Another 50 plants were growing there, and then we found a processing area,” he disclosed.

He believes the site was the work of a professional criminal enterprise.

“Based on what we’ve seen historically, I would say this is most likely related to a cartel,” he theorized.

“The way that it was set up, it was obvious people were living on that property, would lead us to believe, if we had to make a guess, it was most likely cartel-related,” DEA officials said.

While cannabis is legal for adult use in California, the difficult barriers to entry including high taxes, expensive permits, m-licenses, and fees for legal dispensaries to operate often incentivize people to continue to cultivate cannabis illicitly.

“A black market has been created because of that, because people can do this at a fraction of the cost of having to have a licensed marijuana grow and make just as much money, if not more than what they’re making at the licensed dispensaries,” he explained.

“We’ve seen a tremendous upswing in people obtaining a piece of property, typically in our backcountry area of San Diego County, setting up greenhouses and setting up illegally without having permits,” he said.

Sgt. Knierim believes environmental issues stemming from illicit grows, similar to the one the DEA discovered in Del Mar Mesa, can lead to irreparable consequences and serious criminal charges.

“You have a lot of environmental issues, and all of those will be felonies,” he said.

Trash, refuse, a squatter encampment, and two propane tanks were discovered at the grow in Rancho Penasquitos.

The site was referred to as a fire hazard due to the juxtaposition of the open flame burners and dry plant life.

Sgt. Knierim said additional issues caused by illicit cultivation typically include the clearing of native plants and trees plus the illegal use of fertilizers and harmful pesticides.

“The other issue is pesticides. They’ll put pesticides out there that kill any of the animals that come in the area because the animals will eat their plants,” he said.

While an obvious water source was not discovered, DEA officials opined: “In this case, we think it’s more likely they found a fire hydrant or some sort of a city water source that they were able to tap into. We couldn’t find that in this case, but we think that’s the most likely scenario.”

The DEA has yet to locate any suspects related to the illicit cannabis cultivation operation and the investigation is ongoing.

Why Gas Detection is Critical for Cannabis Growers’ Health and Safety