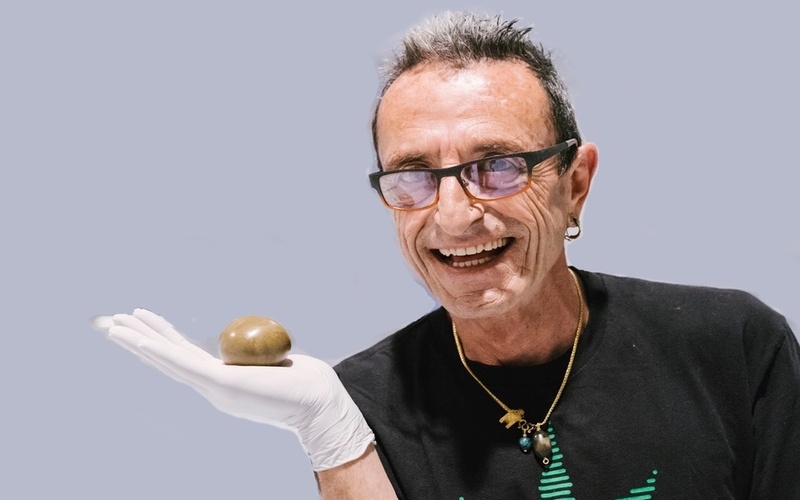 Frenchy Cannoli wouldn’t consider himself an innovator, but don’t let his humble nature fool you.

The master hashishin and creator of Frenchy Cannoli Brand’s Very Special Olde Press has dedicated himself to the ancient art of hand-pressing cannabis resin for decades, playing an instrumental role in placing quality front and center of the California cannabis industry.

Whether it’s keeping the time-honored tradition of hash-making alive through his multitude of classes and speaking engagements or his tireless work to designate the Emerald Triangle as the first true cannabis terroir, Frenchy has committed himself to ensuring craftsmanship and compassion for the consumer remain at the forefront.

“Hashish has been a source of comfort and happiness all my adult life, a vital part of my wellbeing,” he told Cannabis & Tech Today.

But how did Frenchy Cannoli become one of the most revered names in cannabis?

And how does hashish fit in with a modern school of smokers obsessed with the “new new?”

It all comes back to heritage.

To understand Frenchy’s devotion to cannabis, it’s important to go back to the beginning.

After being introduced to hashish at the age of 17 by a friend in his native France — a moment he’s described as a true revelation — he immediately dove headfirst into the culture.

The friend’s family had been secretly producing the rich, flavorful substance, and took the young yet eager new pupil under their wing.

Soon after, Frenchy entered into an 18-year adventure traversing the globe, immersing himself in different hash-producing regions including Morocco, Nepal, and Thailand, observing how the trichomes were carefully removed from the cannabis plant, with the resin heads left intact to manipulate into a sticky, malleable putty fit for smoking.

Rarely spending more than three months in one location, he would hand press enough resin to see him through on his journey to his next locale.

His exposure to techniques utilized for millennia performed by families who had been pressing hash for generations invoked an intense adoration and respect. From high in the Himalayan mountains to the jungles of Cambodia, Frenchy had witnessed a variety of communities yet one thing always remained clear: it’s all about the plant.

“Hashish is a very special and unique cannabis concentrate and hash-making is a very ancient craft with methodologies that have stood the test of time and should be approached with respect and studied to learn the science behind these ancient techniques,” Frenchy said.

Fast-forward two decades to Northern California, where the hashmaker settled in the early 2000s. Despite the years of intensive study learning everything there is to know about producing hash around the world, it was  moving to the United States and a newfound understanding of medical marijuana that hoisted Frenchy’s passion for the plant to new heights.

“It took another dimension altogether when I learned in my mid-40s, when I came to the U.S., that the cannabis plant was medicinal,” he admits.

“I had, up to that point in my life, gone to extreme physical challenges to be able to make the best possible charas or hashish. For most of my life, my passion for hashish had been focused on quality. The knowledge of the medicinal aspect of cannabis resin gave me a deeper thirst for learning all I could about the cannabis plant and the science behind traditional hashish.”

Emerald Triangle: The Bordeaux of Cannabis

Having consumed cannabis around the world, Frenchy maintains that some of the best comes from the Emerald Triangle.

He has been a vocal supporter of the need for quality standards in cannabis, specifically the designation of so-called “terroirs.”

The concept is borrowed from the wine industry, where French regions such as Champagne are exclusively recognized for their environmental characteristics in relation to the quality of the grapes they produce.

Frenchy and others believe the famed Northern California cannabis country should be the first to achieve a similar classification due to the region’s renowned cultivation conditions.

“The word ‘terroir’ expresses the uniqueness of a region, the delicate symbiosis between the land, the climate, the plant kingdom, and the farmers who nurture and enhance the characteristics of the land,” Frenchy explained.

“‘When the French take a bite of cheese or a sip of wine, they taste the earth: rock, grass, hillside, valley, plateau. They ingest nature, and this taste signifies pleasure, a desirable good. Gustatory pleasure and evocative possibilities of taste are intertwined in the French fidelity to the taste of place.’ This quote from Amy B. Trubek’s book, The Taste of Place, was an eye-opener to my own cultural heritage but also to all the ethnic diversity I have experienced during my travels. The concept is universal, and the planet is an abundance of terroir that has been lost to a great extent due to agricultural industrialization and the globalization of the food industry,” he said.

Frenchy feels the bill is a good start in safeguarding not only growers in the Emerald Triangle but also the rich cannabis history that has existed there for decades.

“The Mendocino, Humboldt, and Trinity region, aka the Emerald Triangle, is known worldwide for the quality of its cannabis. The cannabis farming community and the genetics that brought such recognition should be nurtured and protected.”

While hashish remains a dominant force globally, many cannabis consumers in the booming legal markets across America are constantly in search of the next big trend.

The last decade has seen skyrocketing R&D into producing concentrates both at scale and in the artisanal fashion, from the rise of butane hash oil in the early 2010s to the increasing popularity of rosin today.

Classically made hashish composes a tiny fraction of the modern concentrates market, begging the question: will the next generation of smokers be able to truly appreciate a product that doesn’t fit into the category of “hype weed?”

Frenchy maintains that hand-rolled hash will always be in a league of its own, explaining the compound is similar to wine in its production as opposed to the process for other types of extracts, which would be more comparable to spirits like grain alcohol.

“A cannabis extract is like the juice extracted from a fruit, a true expression of the fruit but not the same as the full fruit in all its nourishing wholeness and beneficial characteristics.”

Frenchy pointed out the fruit in this instance is the matrix that creates the juice and sugar — much like the cannabis trichome’s head that biosynthesizes unique psychoactive and medicinal compounds within.

“Rejecting the matrix in a quest for purity is like extracting grape juice to make alcohol instead of crushing and fermenting the whole grapes to produce wine,” he continued. “This is the fundamental difference between hand-rolled [charas] or sieved trichomes glands [hashish] and all other types of extracted resin. While the manufacturing of hashish uses heat and pressure, the resin head’s cellular matrix is retained within the final product and for this reason, cannot be considered an extraction in the same sense that wine is not considered a hard liquor.”

Frenchy added that while he will always be a proponent of traditional hash, he welcomes all forms of extraction as it only serves to push the proverbial needle forward, broadening the appeal of cannabis to more people than ever before.

“I am fascinated by the sheer diversity of extracts today. I have the highest respect for the craftsmanship, dedication, and love that created such diversity and literally revolutionized the cannabis concentrate world.”

Despite a global pandemic grinding his travels and demonstrations to a halt, Frenchy has been hard at work. The master hashishin spent his lockdown squirreled away in his Richmond home, penning two books (one on the history of hash, the second on the art of hash making) while simultaneously collaborating on a third with his counterpart, Madame Cannoli, that’s dedicated to the evolution of edibles.

He also put the final touches on his full-length documentary film, Frenchy Dreams of Hashish, set to be released soon.

“I have lived the life of a hermit for the past year and a half, exactly what I needed to focus fully on writing and studies,” he said. “While the experience has been rewarding beyond my wildest dreams it has been nonetheless challenging so I hope that 2022 will be a year full of travels and workshops around the world, the very opposite of what 2020 and 2021 have been.”

And while grateful for the time spent on projects meant to educate the masses on all the wonders of hashish, Frenchy is looking forward to returning to in-person events where he can continue to share the rich history of his craft, ensuring the ancient art lives on even in an age of hype.

“Innovation stems from a deep knowledge of traditions. We are the sum of our past. We have been given the tools to do better but we need to acknowledge the importance of our traditions to do so.” ϖ

Inaugural Lemonhaze Golf Invitational Lives Up To Its Exclusive Billing

B Real’s Monster Buds: Grow Virtual Bud With B Real