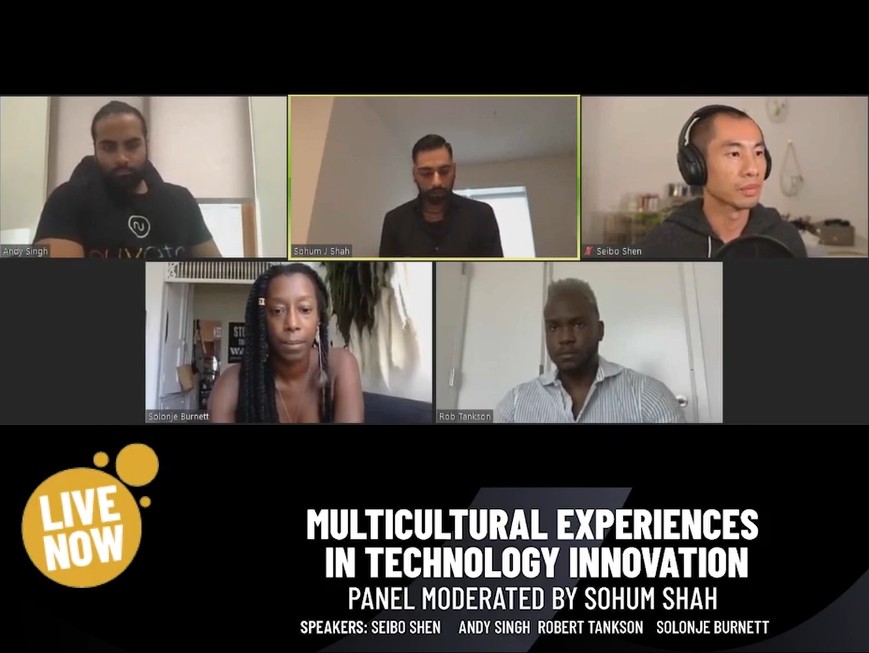 The cannabis space has been less than diverse since its onset as an “industry.”

Even behind the scenes, there aren’t too many minorities.

Shah is the founder and CEO of Durban Creative Media, a cannabis consultant, and the founder of the Cannabis Commodities Exchange. Other panelists included Solonje Burnett, Rob Tankson, Andy Singh, and Seibo Shen.

When discussing the need for education about the actual effects and benefits of cannabis, Solonje Burnett was quick to add her insights. 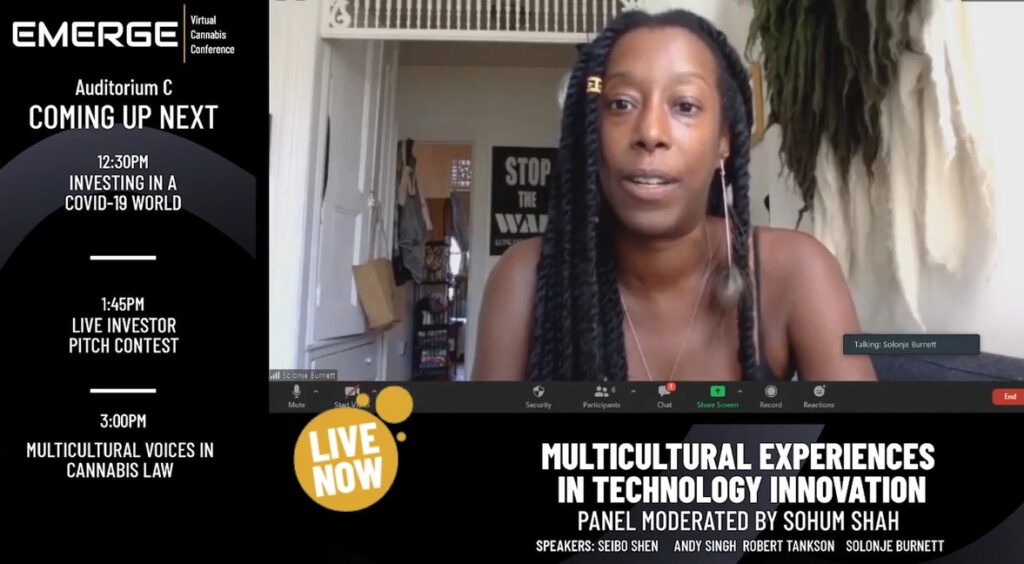 Burnett is a community leader and co-founder of Humble Bloom.

She is also an advisor and member of the Virtue Product Business Equity Council and Advisory Board.

She shared, “At Humble Bloom we really lean into education and advocacy through immersion and immersive connective experiences.

“So, that could look like taking people to a cannabis farm or hemp farm here in New York and actually getting the opportunity to harvest and treat this plant like any other plant, instead of vilifying it, just really normalizing it and having the opportunity to have the consumer see where it comes from, basically from seed to sale.”

Burnett continued, “We’re so used to just going into a grocery store, going into a dispensary, people just don’t know anything about the process of how basically anything is grown.” 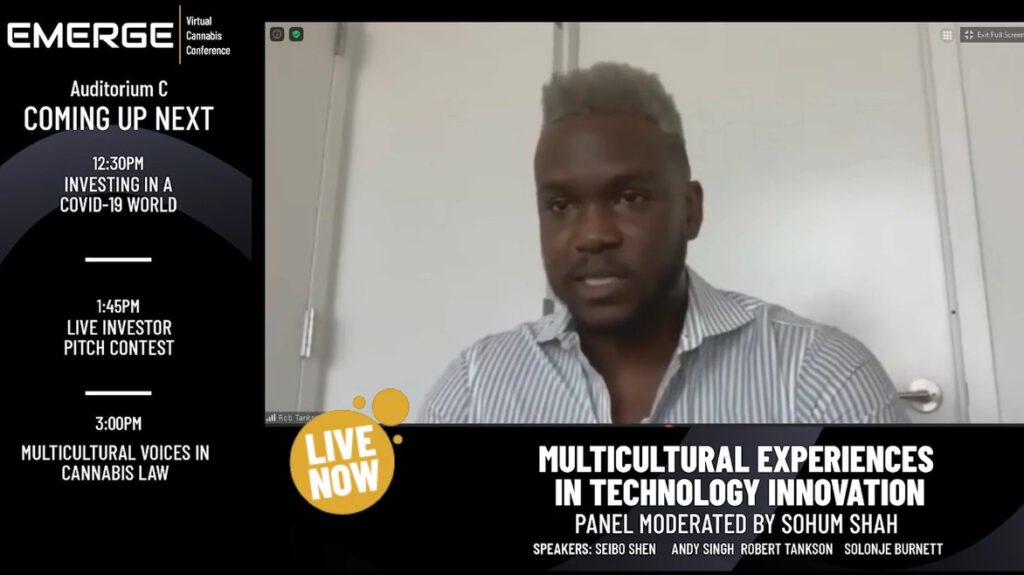 Rob Tankson speaking on the importance of diversity in the cannabis industry.

Tankson was a former Google employee who left to follow his passion for finance and tech.

After breaking away from Google, Tankson took that opportunity to dive into the cannabis space with the launch of Presto Doctor.

The online medical cannabis evaluation service connects patients with cannabis-friendly doctors from California to Oklahoma to Illinois, with more expansions in the pipeline.

“Once I was done with school I was able to fully see the benefits… Presto Doctor allows you to get your weed card online. We’ve seen over 100,000 patients, with that you can see just how diverse the market is. And now, my grandmother is excited to get her weed card.”

Shah asked the speakers about the representation of people of color within the cannabis industry. Speaker Andy Singh, CEO of logistics company Prime Transformer Cannabis, noted “Social equity licensing is not prevalent at all, in fact I know only a few cities that are allowing it.

“I know there was some work done in San Francisco, Oakland, but that’s really all I know and I’ve followed a lot of the Southern California cities, as well as central, and some northern.” 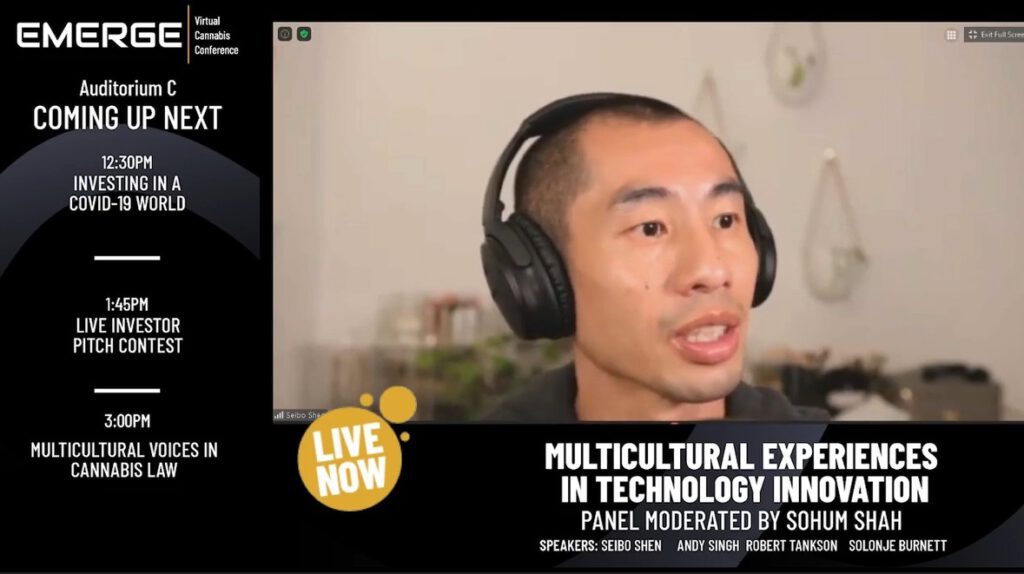 Speaker Seibo Shen, the co-founder of Vapexhale and two more cannabis companies, added “I know a handful of other Asian entrepreneurs in this space and I always ask them to be on these panels with me and they always say no.

So, I’m usually like the only Asian male or female on these panels and representation is really important.

I’m not here because I like hearing my own voice, I’m on here because I want other people to see someone like me can feel confident [in this space] and think, “If this guy could do it, I could be in here too.”

He continued, “If I’m the only Asian guy always showing up, I mean it’s nice because I get to put it on my resume, like okay, I spoke at this other event but it would be really great to see others that look like me up here that were being vocal.

“It’s interesting because a lot of the Asians I know are in the grow industry and for whatever reason, they’re so afraid. So, I’m just putting it out there if you’re another Asian person and you get invited to a panel, please say yes. It really matters.”