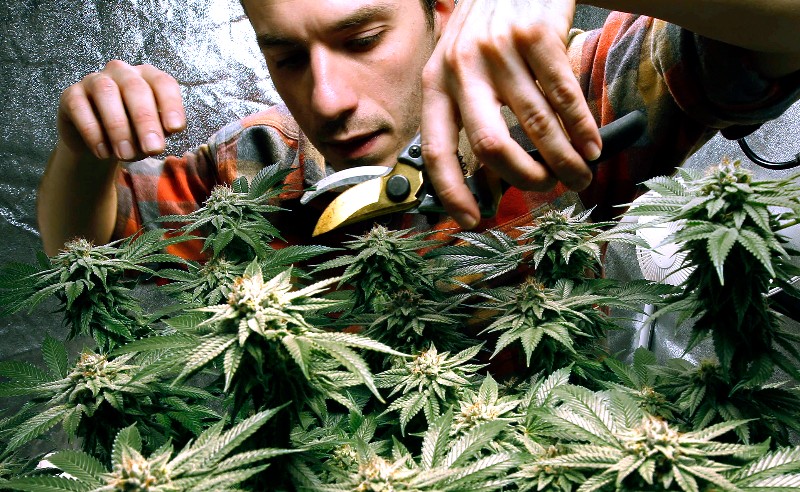 New Hampshire lawmakers considering whether to legalize recreational marijuana heard Tuesday from supporters arguing such a move is long overdue and opponents urging them to resist pressure from surrounding states.

Ten states have legalized recreational marijuana — including the three bordering New Hampshire — while New York, New Jersey and others are considering it this year. Past efforts have failed in New Hampshire, but Democrats, who added legalization to their party platform last year, now control both the House and Senate. And the bill’s sponsor, Rep. Renny Cushing, pointed to movement in other states as a reason his bill should pass.

“I think we’re in an entirely different political climate right now than we have been in the past,” Cushing, D-Hampton, said at a news conference ahead of a public hearing on his bill. “There’s a reality we can’t ignore. I think you’re going to see people who will be interested in this new emerging market, this new emerging product, that ultimately is going to be beneficial for the state’s coffers and for the business climate in New Hampshire.”

The bill before the House Criminal Justice and Public Safety Committee on Tuesday would legalize up to 1 ounce (28 grams) of recreational marijuana and 5 grams of concentrated cannabis. Adults would be allowed to grow up to six plants, and a commission would be set up to license and regulate an industry supporters said could produce $33 million per year in revenue.

Republican Gov. Chris Sununu, however, opposes legalization and has said he would veto the bill if it passes. While supporters say marijuana could help people recover from opioid addiction, opponents argue legalization would only make things worse in a state with one of the highest rates of opioid overdose deaths.

“I think the statistics speak for themselves when it comes to the dangers of marijuana, especially given the severity of the opioid crisis,” he told reporters before Tuesday’s hearing, which was held in the 400-seat Representative’s Hall to accommodate the large crowd of speakers.
Kate Frey, of the health advocacy group New Futures, said she agreed that New Hampshire stands out because it is surrounded by recreational marijuana states, but that’s not the only reason. She said the state is an island because of its high rate of substance misuse and history of underfunding prevention and treatment.

“Think about what’s best for New Hampshire, and don’t just do it because other states are doing it.”

The bill was opposed by medical and law enforcement groups, including the New Hampshire Association of Chiefs of Police. Bedford Chief John Bryfonski cited numerous concerns, including the possibility of impaired drivers causing more crashes after a year in which the state recorded a high number of traffic fatalities.

“New Hampshire has a rich heritage of going its own way and not following others because it’s fashionable,” he said. “New Hampshire should not become another experiment and suffer the consequences of a rush to judgment.”

“We should keep the momentum on track by joining the states in favor of saner policies for the use of the harmless high, cannabis,” said Sen. John Reagan, R-Deerfield. “The production of locally grown, tested, regulated and safe cannabis to adults is more benefit than danger.”