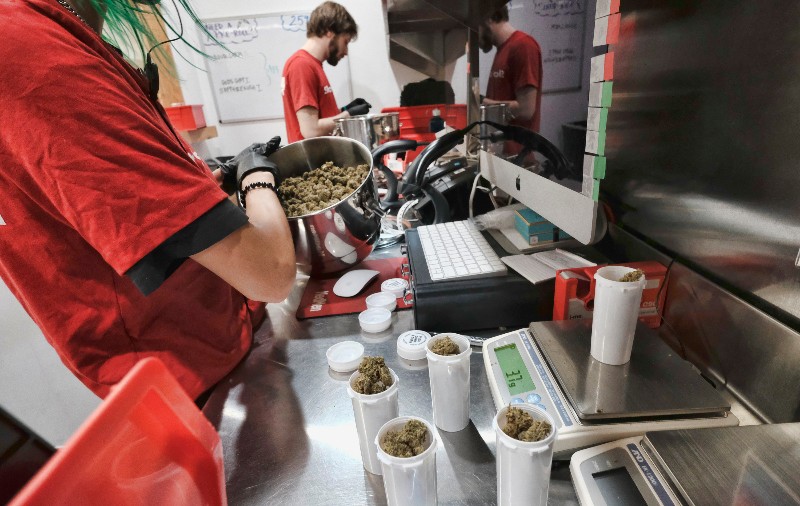 SAN FRANCISCO (AP) — California’s much-hyped, year-old marijuana industry fell woefully short of expectations in 2018 and industry leaders blame their inability to compete with the state’s robust black market, which doesn’t pay the taxes and navigate the red tape they do.

Democrat Assemblyman Rob Bonta of Oakland on Monday proposed to temporarily reduce the 15 percent tax consumers pay at the retail counter to 11 percent and eliminate the $148 per pound of pot farmers pay for three years. Bonta said the state’s legal marijuana industry is “not occurring as we hoped, expected, and wanted.”

Analyst GreenEdge says legal California sales fell to $2.5 billion in 2018 from $3 billion in 2017 when only medical marijuana was legally available.

“Excessive taxation hurts legal businesses and consumers while spurring the illegal market,” said Michael Ray, chief executive of cannabis company Bloom Farms. “Lowering taxes is a step in the right direction towards growth in the legal market here in California.”

Boosters of the legal pot industry said the tax proposal was a good start, but that onerous and costly regulations are also enticing growers and sellers to skip licensing and remain selling marijuana illegally.

“Lowering state excise taxes will help the legal marijuana industry gain a better foothold over the black market in California,” said Ellen Komp of the pro-marijuana group California NORML. “It would also be helpful if the regulatory burden could be eased on producers hoping to enter the licensed, regulated market.”

Newly elected Democrat Treasurer Fiona Ma, who supported marijuana legislation when she served in the Assembly, said Monday she supports the tax cut.

The proposal if passed would not lower county and city taxes, some of which are higher than the state’s rates.

Palmdale Republican Assemblyman Tom Lackey, who signed on to the current bill, sponsored a similar measure last year that failed to pass out of the Assembly’s appropriations committee last year. Democratic Assemblywoman Lorena Gonzalez Fletcher of San Diego, the chair of the committee, said at the time she and other opponents agreed with the Legislative Analyst’s Office estimate at the time that the cuts would reduce annual funds to the state by up to $297 million.

On Jan. 1, 2018, California broadly legalized marijuana use for adults after overwhelming support for Proposition 64, which promised to fill state and local coffers while helping to eliminate the state’s illegal operators. But far fewer licenses and tax revenues have been collected than expected and legal businesses point to the state and local taxes and red tape as the reasons.

Lackey and the other lawmakers supporting the current measure said they hoped a tax cut would increase legal sales and help legitimate operators compete with the black market.

Raising Capital for Your Canna-business