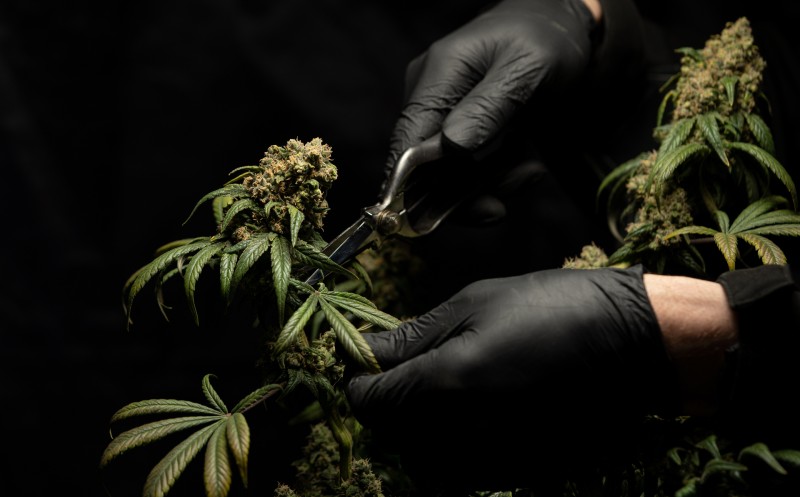 Pennsylvania Gov. Tom Wolf has pardoned an eye doctor who said he began growing marijuana to help his dying wife reduce her use of opioids.

Dr. Paul Ezell, 65, of Delaware County, located outside of Philadelphia, served six months in jail in 2014 and lost his ability to practice medicine after pleading guilty to a felony drug charge, according to ABC News.

In Dr. Ezell’s defense, he began growing cannabis to help his ill wife reduce her use of prescription opioids.

After her death, Ezell was in the process of destroying his basement operation when a narc spotted clippings in the trash and turned him in.

“Here’s a doctor of 30 years who had not so much as a speeding ticket, and then his whole life is ruined for giving his wife medicine that’s now legal in Pennsylvania,” said Lt. Gov. John Fetterman, who chairs the state Board of Pardons and who is a fervent advocate for legalizing marijuana for recreational use, according to ABC News.

The pardon could allow Dr. Ezell to return to practicing medicine, according to the lieutenant governor’s office, which made the announcement.

Next month, the pardons board will hear the case of Dr. Ezell’s daughter, Victoria Ezell, a nurse who pleaded guilty, served probation, and also lost her license because of her father’s cannabis case.

U.S. Customs and Border Protection (CPB) officers seized more than 3,760 pounds of cannabis on Sunday, May 16, in the largest marijuana seizure in North Dakota’s state history.

They also seized $645,240 in unreported Canadian currency on Thursday, May 20.

According to the Grand Forks Herald, the seizure, valuing more than $6 million, was discovered in a shipment of plastic containers on a tractor-trailer.

He is next scheduled to appear in Burke County District Court for a preliminary hearing on July 13.

Smokable medical marijuana approved in Louisiana’s Senate; next stop is governor’s sign off.

Louisiana’s medical marijuana patients will soon probably be able to access cannabis flower after the state Legislature agreed to expand its mmj program beyond the current non-smokable forms like inhalers, tinctures, and gummies.

The Senate made technical changes that still need the House’s approval.

After that, the bill would head to the desk of Gov. John Bel Edwards, a Democrat who has indicated he’ll sign it, according to the Advocate.

The Illinois Senate passed a bill Friday creating new licenses and lotteries for marijuana dispensary licenses, addressing criticism that has plagued the process set forth by a 2019 law legalizing cannabis for adult use.

Illinois hasn’t awarded any new cannabis dispensary licenses after coming under criticism for not including more minority applicants in the initial lottery last year.

Legislation in the statehouse seeks to fix that with two new dispensary lotteries, according to St. Louis Public Radio, a division of NPR.

Legislation revamping the state’s system for awarding marijuana dispensary licenses passed the House on Tuesday, May 25.

The measure is meant to address shortcomings in the 2019 Cannabis Regulation and Tax Act, specifically in regard to a license lottery that was delayed by the pandemic, controversy, and legal disputes for over a year.

It passed the Senate in a 50- 3 vote and will be sent to Pritzker for his signature.

“There was a war on drugs that we all know so well, especially those of us in the black community, there were provisions in the (CRTA) that address that but we wanted to make sure that there was also ownership.”

Late Tuesday, the Texas Senate approved a measure that would allow more individuals with chronic health conditions to participate in the state’s compassionate use program, which allows medical use of low-potency cannabis.

Originally approved in 2015 for the treatment of children with an intractable seizure disorder, the program’s success shows it should be expanded to more patients, said bill sponsor and Georgetown Senator Charles Schwertner, according to the Athens Daily Review.

“As a pharmacist and a physician, I feel strongly that our limited medical program, with appropriate rules and oversight, is the right path for patients in Texas seeking symptom relief,” Senator Schwertner said at a Monday hearing on the bill. “The evidence is starting to show –I believe there needs to be further work on that– but certainly the testimony is very strong by patients suffering [from] some of these conditions.

The bill, HB 1535, would also create a research program at the Department of State Health Services to continue to examine the evidence for the medical uses of cannabis.

The bill increases the potency of cannabis permitted for use under the program, allowing up to 1% tetrahydrocannabinol (THC).

As it came over from the House, the bill would have permitted the use of cannabis with up to 5% THC, but the Senate reduced that level.

It doesn’t limit levels of CBD, which is remarkable considering the federal legal limit of THC in CBD is 0.3%

(It is widely recognized that this 0.3% THC cutoff for hemp CBD is arbitrary. The feds decided that hemp magically turns into marijuana by classification once it exceeds this limit.)

(Via NCIA) – The Marijuana Opportunity, Reinvestment, and Expungement (MORE) Act, H.R.3884, which would remove cannabis from the federal Controlled Substances Act and attempt to undo the damage caused by racially and economically disproportionate enforcement of prohibition, was reintroduced in the House of Representatives on Friday.

An earlier version of the bill was passed in December in a largely party-line vote, becoming the first comprehensive cannabis policy reform legislation to receive a floor vote or be approved by either chamber of Congress.

The MORE Act, sponsored by House Judiciary Chairman Jerrold Nadler (D-NY), would make cannabis legal at the federal level by removing it from the Controlled Substances Act and eliminating the conflict between federal law and states with regulated cannabis systems and would require the expungement of past federal cannabis convictions.

The bill would establish a Cannabis Justice Office to administer a program to reinvest resources in the communities that have been most heavily impacted by prohibition, funded by a graduated tax on state-legal cannabis commerce.

It would also prevent discrimination based on cannabis consumption during immigration proceedings, and permit doctors within the Veterans Affairs system to recommend medical cannabis to patients in accordance with applicable state laws.

The MORE Act has not been reintroduced in the Senate yet, but Majority Leader Chuck Schumer (D-NY) has made cannabis policy reform a priority for the upper chamber this year and is expected to introduce separate comprehensive descheduling and restorative justice legislation with Sens. Cory Booker (D-NJ) and Ron Wyden (D-OR) in the near future.

“The House has the opportunity to double down on its commitment to justice and economic recovery this year by taking up the MORE Act immediately and continuing the robust debate on how to best end the disastrous federal war on cannabis,” said Aaron Smith, co-founder, and chief executive officer of the National Cannabis Industry Association (NCIA). “Given the rapidly growing number of states with legal cannabis markets and the steadily increasing support from voters across the political spectrum, we expect there could be even more support for ending the failed federal prohibition in this session.”

Revisions from the version passed by the House in December include stipulations to allow the Small Business Administration to provide loans and technical assistance directly to cannabis-related businesses; support state and local equity licensing programs; and put added emphasis on assisting people who have been most impacted by prohibition.

Additionally, a stipulation that was added shortly before the successful floor vote that would have allowed federal regulators to deny cannabis business licenses to applicants who have prior felony convictions was removed.

The Mississippi Supreme Court recently invalidated the popular medical initiative due to an outdated technicality, and voters and advocates in South Dakota await a final ruling by that state’s highest court on a similar challenge to the approved adult-use ballot initiative.

So far in 2021, the states of New Mexico, New York, and Virginia have all passed laws regulating cannabis for adults, and Alabama approved a medical cannabis bill earlier this month. Dozens of states are considering cannabis policy reform legislation this year.

House of Saka, home of Napa Valley’s “vinfusions”, or alcohol-removed, cannabis-infused wine, announces the hiring of Aaron Silverstein, previously of BevZero, as VP of Production and Business Development.

Silverstein is currently on the Board of the Cannabis Beverage Association and, in 2020, was named by Benzinga as one of the most pivotal players in the cannabis and hemp-infused beverage sector.

“I’ve always been enamored with the House of Saka brand,” says Silverstein, “joining House of Saka feels more like going home than starting a new position.”

Silverstein’s hiring comes at a serendipitous time as Saka is gearing up for the launch of its new product Saka Spark – a single-serve “mimosa” style beverage– and a revamp of its core products, PINK (rosé of pinot noir) and WHITE (chardonnay).

“We strive for perfection in everything that we do, settling for nothing less. As a noted authority on non-alcoholic wine, Aaron is the perfect addition to our team as we move forward in new product development and expansion. We could not be more thrilled to welcome him to the family,” says Cynthia Salarizadeh, House of Saka’s Founder and President.

Different Ways Hemp Can be Utilized as House-Building Materials