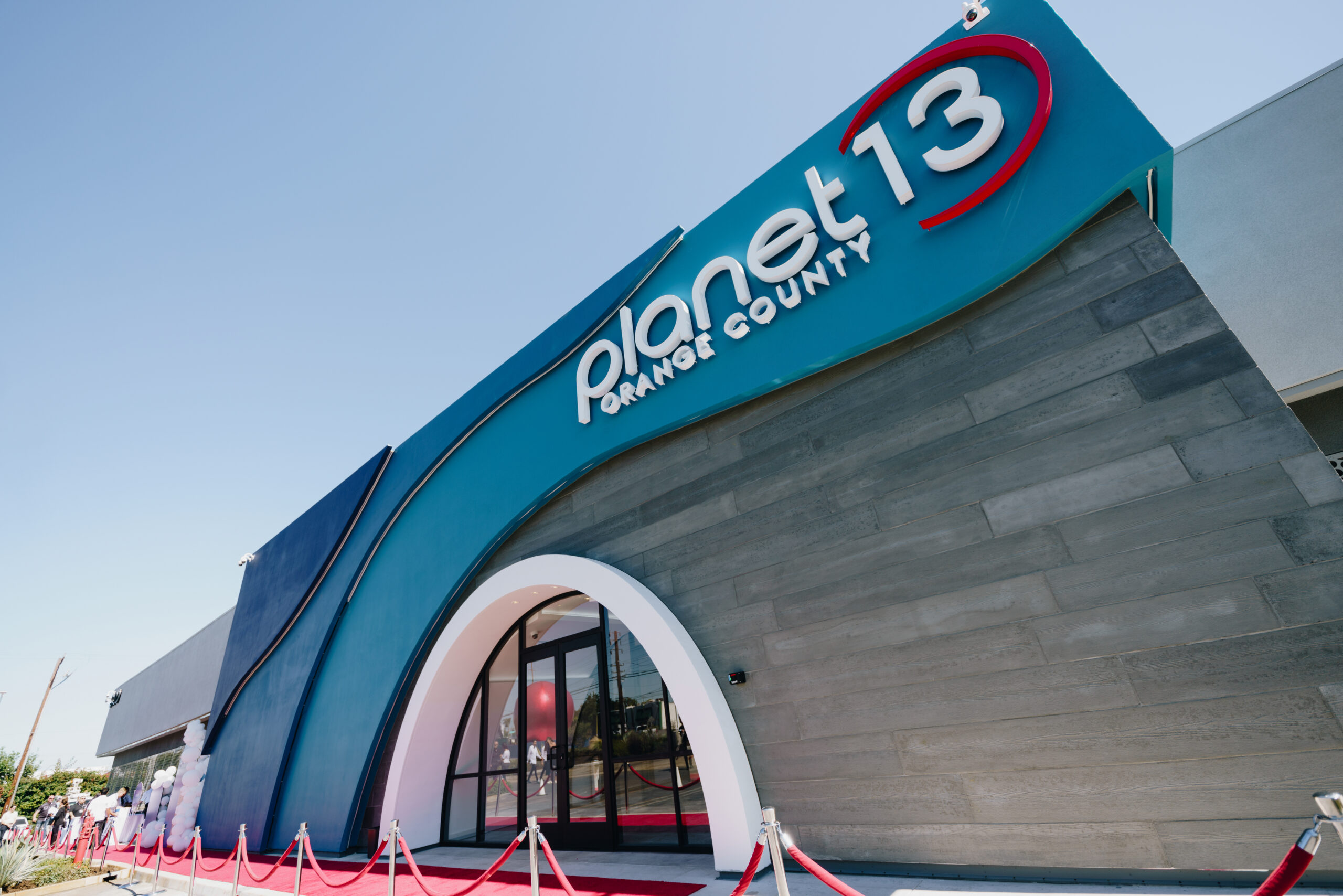 The cannabis retail experience is rapidly changing. Gone are the days of dimly lit dispensaries with tacky flashing signs. As retailers seek to differentiate, it’s no longer about selling a product. Instead, it’s increasingly about selling a complete consumer experience.

Planet 13 is the epitome of this new wave of retail, toting cannabis as a destination. With the world’s largest cannabis store in Las Vegas, Nevada, and now with the second largest store in Santa Ana, California, they are on a quest to transform the cannabis retail landscape.

In an interview, Larry Scheffler, co-CEO of Planet 13 Holdings, discussed the vision behind making cannabis retail a sharable experience. He reflected on what it took to move the cannabis industry in this new direction, including wielding the power of social media and emphasizing the importance of location.

When Scheffler and Bob Groesbeck, the other co-CEO at Planet 13, originally got into cannabis, it started with a small 2,500 square foot space near the Raiders stadium in Las Vegas.

In the first 10 months of operation, they made a whopping $18 million. Still, as Scheffler judged, “Why do we have 43 competitors fighting for 2.3 million locals when there are 55 million tourists coming?”

From this perspective, it made sense to pivot from a simple retail location to a tourist attraction.

As longtime Las Vegas residents, the entertainment business model comes naturally to Scheffler and Groesbeck. In Scheffler’s words, “All we know about is the tourists and entertaining the tourists. And they will come. They don’t even know how they want to be entertained. That’s your job to figure out how to entertain them.”

As guests wander through the expansive space, they can watch the production team make edibles in the Willy-Wonka-inspired, glass-paneled factory or indulge at the on-site restaurant and bar. Soon, a pair of fighting robots will add to the all-out nature of the Planet 13 experience.

The recent opening of the newest Planet 13 megaplex in Orange County, California, builds on this highly-interactive model. Playing into the laid-back ocean energy of the California coast, this location features an 80-foot digital display wall of waves and a smoked-out Volkswagen van, among countless other social media photo ops.

Planet 13 aims to immerse guests into all things cannabis as soon as they walk through the door.

Selling Cannabis as a Destination Hinges on Location

A cannabis superstore needs a super consumer base. For this model to work, location truly is the foundation.

Las Vegas, an established entertainment destination, was a natural fit for this cannabis retail model. But with strict regulations against cannabis in the gaming corridor, securing a strip-adjacent location took more than a bit of ingenuity.

By stumbling on an accidental zoning loophole, Scheffler and Groesbeck struck gold. The team secured the 112,000 square foot space, backing onto the famous Vegas strip. It ticked all the necessary boxes for making cannabis a tourist attraction: millions of annual visitors, high visibility, and centrally located within an established entertainment hub.

This checklist is one that Planet 13 continues to pursue in their country-wide expansion, with a second storefront now open in Orange County, California.

Scheffler and the Planet 13 team looked at over 100 different locations between San Jose and San Diego. With nothing meeting their strict list of must-haves they almost gave up on California altogether. But, suddenly, a 55,000 square foot space in Santa Ana came up.

The massive retail space checked all the right boxes for the entertainment destination model. It’s close to other major tourist attractions like Disneyland, has ample parking, and sits next to a six-lane highway for increased visibility.

Planet 13 has just secured their license in Chicago, Illinois, and they now have their sights set on major tourist hubs like Florida. As Scheduler says, “If it’s big enough for a sports team, it’s usually big enough
for Planet 13.”

Banking on Social Media to Spread the Word

As many retailers know all too well, the restriction on advertising anything weed-related is an uphill battle. Facebook, Instagram, and Google make it near-impossible to advertise cannabis products and services openly. The traditional advertising strategies no longer work.

So why not bank on the best possible marketing strategy there is? Planet 13 is baking word-of-mouth marketing into their advertising strategy. By cramming in as many social media-worthy and shareable experiences into both their locations, they encourage guests to snap and share their shopping experience.

Scheffler made clear, “That was our thought process, is to have people advertise for us.” Already they are seeing guests share, tag, and spread the Planet 13 message. Scheffler has witnessed how “they’ll send it to 10 or 20 of their best friends, and the web just keeps going out.”

The ability to carefully circumvent the current restrictions on cannabis advertising isn’t open to just any retailer. Word of mouth and social media shares are only effective for photo-worthy experiences in spaces explicitly designed to make a visual impact — places like Planet 13.

Selling Cannabis as a Destination is Only Just Getting Started

With plans for a dozen or more cannabis entertainment superstores across the country, Planet 13 is just getting going. And while there may only be capacity for a limited number of cannabis megaplexes at each major tourist hub, smaller retailers can still lean into this growing trend.

Sponsored cannabis-friendly hotels and accommodations, consumption lounges, and 420 amusement parks could all kick off as legalization spreads. Planet 13 is the first in a new wave of retailers selling cannabis as a lasting consumer experience.

This article first appeared in Fall 2021 issue. Sign up here.