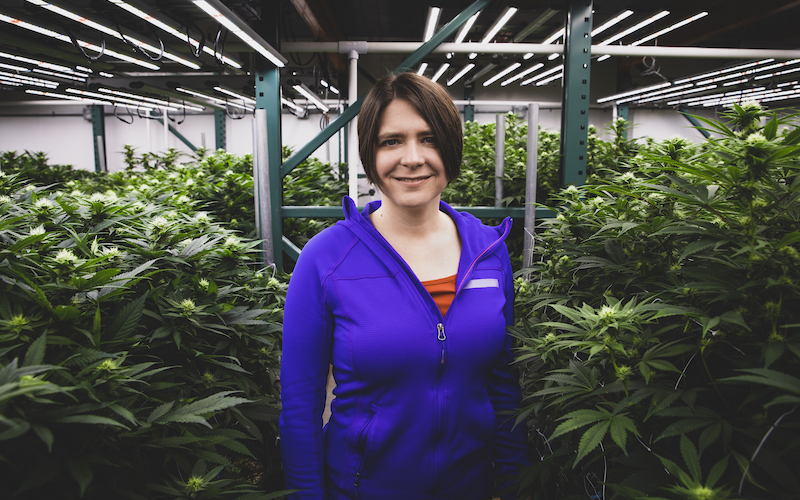 Sometimes in the swirling chaos of life, it’s easy to lose belief in fate and destiny. Why did this happen? Where am I going? Conversely, in the best of times, everything becomes clear. The “Aha!” moment, when we can finally understand where the road has been leading us.

For Katie Stem, CEO of Peak Extracts in Oregon, her “Aha!” moment came when she opened her cannabis extraction business. Beginning with her battle with Crohn’s disease, Stem has been on a winding journey that’s taken her from a promising career in research and laboratory science to a lucrative and rewarding business creating finely tuned cannabis creations.

Laboratory science certainly plays into cannabis extraction, but Stem also forayed into Chinese herbal medicine and business management before settling into her career as the CEO of an award-winning cannabis company.

We spoke with Stem to learn how her journey began, how her skills culminated in cannabis, and why science is at the core of every business decision she makes.

Cannabis & Tech Today: How did you first become involved in the cannabis space? 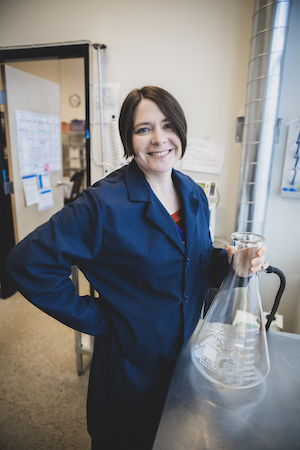 Katie Stem: I was diagnosed with Crohn’s disease when I was 21. I was living in Minnesota at the time and I moved back to the Pacific Northwest in 2004 to get a job at Oregon Health Sciences University (OHSU), which is a research hospital. I had a number of years of lab experience doing research at that point, so I wanted to work for a major institution.

When I arrived in Oregon I went to a gastroenterologist to talk about my Crohn’s and he recommended that I try cannabis for my symptoms.

Blue Magoo is really helpful for me, but Trainwreck made me paranoid and I kind of hated it. It didn’t help with my symptoms at all. That’s when I started really honing in on this idea that different strains can make a big impact on different symptoms.

As the years went on I started making my own edibles because I needed something that was long acting and I also didn’t want to smoke. I started making strain-specific edibles, which still isn’t very common, but at the time no one had even considered it.

I worked at OHSU for several years doing research on MS. My work there was mostly focused on natural products and pharmacology. We were comparing normal pharmaceutical drugs and interventions compared to green tea, fish oil, or grape seed extract, and what the effect on all of those things were on inflammation and the progression of MS.

So then, when I stopped working at OHSU, I went to school for Chinese herbal medicine. I became certified and started my own practice in 2010. And all the while, I kept making chocolates.

I think my parents thought I was bouncing around a little bit between science, medicine, and I also did two terms in AmeriCorps, which was mostly focused on business and management skills.

My parents thought I was bouncing around, but now it’s like everything I’ve done is totally useful for what I’m doing now. It’s just so nice to have a vocation that brings all my skills together in such a tidy way.

C&T Today: How has your training in Chinese herbal medicine influenced your business?

Katie Stem: I like to integrate the concept of whole plant medicine and a lot of the herbal formula-type ideas. In Chinese medicine, they think of all herbs as having particular properties. They also do a lot of extraction of herbs in their preparations. So, there was a lot of fun data that I was able to look at, and look at analogous herbs and how they’re extracted.

The point with Chinese herbs is that you’re supposed to pull all of the constituents of the plant into the extract so that you can get all the benefits. So, it’s kind of the same idea with what we’re doing. I want to produce an extract that’s as close to the plant material as humanly possible.

C&T Today: Is that why Peak Extracts focuses on full spectrum formulations rather than isolates?

Katie Stem: That really goes back to my work at OHSU. There was something that really stuck with me when we were working with EGCG, which is a long, really unpronounceable word, but it’s the active component in green tea.

It’s a strong antioxidant that’s been shown to be useful for any of us that have high inflammation or oxidative stress, like MS. And the problem was that green tea is very well tolerated by pretty much everybody. You can drink green tea all day and not have any issues. There’s anecdotal reports of people drinking hundreds of cups of green tea a day without any incidents.

But, when you pull the EGCG out of the green tea, it becomes really caustic. And we were unable to get it into a high enough dose to be effective as a supplement because it was so caustic without the other components of the plant to buffer it.

And so, it’s not just EGCG that’s beneficial about green tea, that’s just the compound they think is the most beneficial. So, we want to pull all the beneficial compounds, but we also want to keep it from doing what the EGCG did, which is that it’s not pleasant to take and it might even be harmful.

I don’t think that the THC or CBD isolates are harmful, but my analogy with cannabis is Marinol, the isolated THC. It’s fairly useful for patients, but they don’t like taking it because it’s unpleasant. When you pull all of the beneficial compounds and terpenes they have their own effects on the pharmacology too.

Ultimately, it’s better for the patients, it’s a more nuanced effect, and it’s different strain to strain because there’s a huge variety of pharmacologically active substances. A lot of the terpenes can affect the way that reuptake or absorption occurs. It’s a super varied myriad of compounds, based on how you extract it and how you preserve all the characteristics.

That’s why we don’t do any isolation chemistry in our lab, it’s all full plant extract.

C&T Today: What’s one of the most pervasive challenges of operating your business?

Katie Stem: The biggest problem, and it continues to be an issue, is changing packaging regulations for Oregon. We’ll design a label and we’ll put particular warnings on there and then we’ll get a notice saying they want to change the wording slightly. And so, we’ll have to redo all our packaging or modify the design.

The [regulators] don’t seem to realize that when they make that kind of revision that we have inventory that’s already packaged, that then we have to either relabel or discard, which is just so… It’s so upsetting. It’s lost labor, materials, and hours. I’m hoping that the bumps will get further apart as we have more time in the industry.

C&T Today: What aspect of your business are you most passionate about?

Katie Stem: The thing I care most about is this idea of being able to customize your experience by having access to the different cultivars.

And that’s why we do all full extract and we also color code our products so people can navigate both chocolates, tinctures, and the cartridge line based on what kind of experience they want because the colors will guide them to what they typically like. Even if the cultivars are different, the colors will help them to know what they’ve enjoyed in the past.

It’s been a blast to hear from people about their favorite colors. For instance, all three of the original founding members don’t like the red products and that’s why we made it red. It’s like danger. It’s a heavy sativa – strains like Bruce Banner that are really intense with fuzzy, racing thoughts. There’s also a heavy body buzz and they make all of us really anxious.

It’s like Trainwreck, one of the original strains that I didn’t like. And we have people coming up to us saying, “Oh my God, the reds are amazing. It’s the best thing for sleep.” And I’m just like, “Wow!” Personal body chemistry is so fascinating to me.

That’s why it’s so important that people can choose, because what makes someone sleepy might make someone else really hyper. There’s something special about the chemistry of each of these strains, so I really want people to be able to choose what they are going to go through.