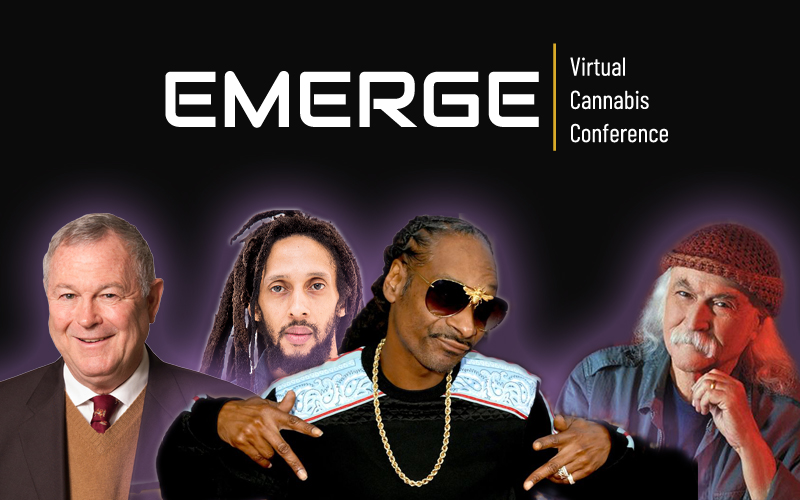 A star-studded virtual who’s-who in cannabis will include Snoop Dogg accepting the Clio Lifetime Achievement Award. A slate of keynote speakers is topped by names like David Crosby, Julian Marley and former Congressman Dana Rohrabacher.

This will be the second Emerge event of the year, but it has definitely grown from its fall predecessor. The three-day event has more than 60 exhibitors and is expecting more than 2,500 attendees.

In a world where virtual conferences are the new thing, that’s a solid showing.

They have signed on an impressive list of speakers who can be followed in 30 sessions down three separate subject tracks.

The first track focuses on cannabis sales and marketing. Sessions include topics such as:

The second track for Emerge attendees takes its aim at the future of cannabis business. In addition to an investor pitch contest, these sessions include:

* Emerging Consumer Trends in the Cannabis Space
* How to Secure Cannabis Funding and Investors
* The Number One New Cannabis Market: Mexico
* Establishing a Standardized Cannabis Industry Nomenclature
Track three centers on Cannabis Health and Wellness. Attendees of this track can expect such topics as:
* Cannabinoid Medicine and Autism
* Cannabis in Pet Wellness and Treatments
* Covid & Cannabis: Facts and Fictions
* Medical Cannabis: Scientific Evidence and Emerging Treatments

At 9 a.m. Tuesday, David Crosby will kick off the event. Crosby spent the better part of five decades in the rock and roll world. He was a founding member of Crosby, Stills, Nash & Young, as well as The Byrds.

He has sold over 35 million albums, has twice been inducted into the Rock & Roll Hall of Fame and the prestigious Songwriters Hall of Fame. The Grammy award-winning singer, songwriter, guitarist, activist, counter-culture icon, author and cannabis advocate has had an unparalleled career.

Now, Crosby is developing his own cannabis brand, “Mighty Croz.” Plans are in place for the brand to launch flower, pre-roll joints, oil cartridges, infused edibles and a variety of CBD products.

Wednesday will begin with an opening panel on the 2020 elections and various regulatory updates. Meg Collins, principal at Advocacy Solutions, LLC, is moderating the panel. Panelists include attorney Henry Baskerville of Fortis Law Partners, cannabis entrepreneur Joe Caltabiano and Tyler Williams, founder and CTO of Cannabis Safety and Quality (CSQ).

Day three will begin with an address by former Congressman Dana Rohrabacher. He was co-author of the Rohrabacher-Farr amendment which prevented the U.S. Justice Department from spending funds to interfere with states’ medical cannabis laws.

The event will close out with an interview with musician Julian Marley, son of the famed late reggae musician, Bob Marley.

Growing up as a youth in a musical atmosphere, the Grammy Award Nominated roots-reggae musician, singer-songwriter, producer, and humanitarian quickly adopted a musical lifestyle, and at an early age became a skillful, self-taught musician mastering the bass, drums, guitar, and keyboards.

For more information on the Winter Emerge 2020 Virtual Cannabis Conference & Expo, check out the website. Tickets are still available.