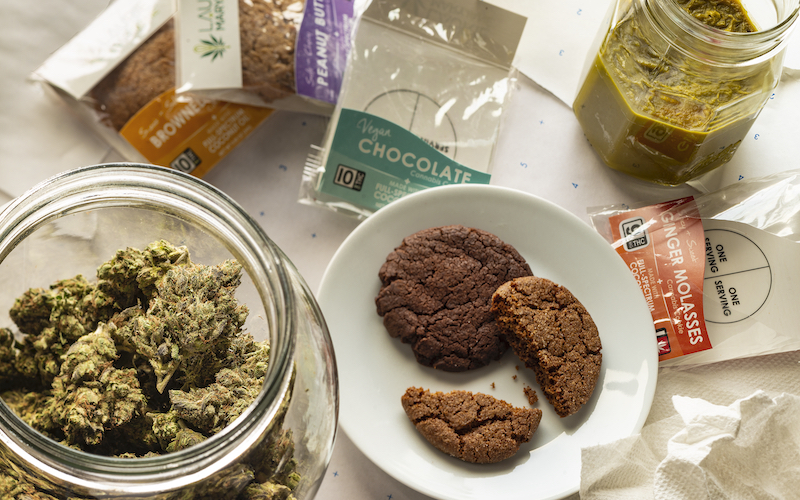 To say that Laurie Wolf is a major force in the world of edibles is a major understatement. The author of four cannabis-focused cookbooks, including Marijuana Edibles, HERB, The Medical Marijuana Dispensary, and Cooking with Cannabis, Wolf has made it clear that the substance deserves a place on the spice rack. Outside of her own published books, her recipes have been featured in the pages of The Cannabist, DOPE Magazine, Culture, and High Times, with a brownie recipe named the all-time best by Leafly.

While her recipes alone would make her a leader within the edibles community, it’s Wolf’s work with Laurie + MaryJane that shows her mastery of the cannabis kitchen. A family-owned and operated business, Laurie + MaryJane offers high-end edibles such as Almond Cake Bites, Cheese Crisp Crackers, and Fruity Nut Bars to over 200 dispensaries around Oregon. In our conversation with Wolf, she discusses the science and infusion of edibles, as well as her personal favorite infused recipes. 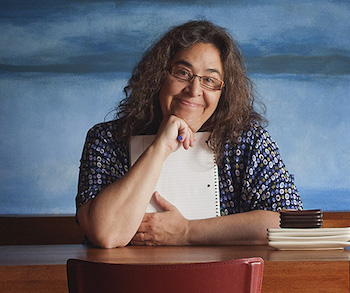 Cannabis & Tech Today: When did you first begin creating edibles?

Laurie Wolf: You know, I made pot brownies off and on throughout my life, but it wasn’t until about seven or eight years ago when I moved to Portland, Oregon from New York, and I started using cannabis to manage a seizure disorder that I have. And the edibles available at that time, because cannabis was medically legal in Oregon, the edibles were just dreadful. It turned out I had been on a lot of pretty dreadful medications, and I met a guy who had the same kind of seizure disorder, and he told me that he managed his with cannabis, so I got a medical card and started using cannabis and I slowly weaned myself off of the medicine that I was on.

When I got my medical card and started trying edibles, they were terrible. There was nobody doing it here in Oregon that had a clue. So they tasted super nasty. There was nothing interesting. It was a Rice Krispie treat, and there were no regulations … They tasted awful. There was no effort to take away the taste of cannabis, which is, most of the time, the goal in my company. There are a few foods that blend well with cannabis, but mostly I want the taste to be gone.

So about five years ago, my daughter-in-law and I kind of started doing it all right and getting it tested. We got our recreational license, and at that point I was contacted to do a couple of cookbooks. I had done some books previously, but not in the cannabis world. And I had been a recipe developer for a long time. So I did a book with a chef from Colorado. And I guess it was during the course of creating recipes for that book when I realized the challenge of cooking with cannabis. How I describe it is it’s like cooking with a new herb that doesn’t taste very good.

Related: How Do You Test Edibles? We Asked a Cannabis Cook

C&T Today: Tell me a bit about your infusion process.

LW: We infuse in coconut oil. It has the most fat of cooking oil so that you get the fullest experience, the best high. And then we have a line of fruity nut bars that are vegan, gluten free, and they’re only coconut oil, we don’t use butter. But for the baked goods we do because baked things taste best with butter.

At home, I have a wall of infused oils of every kind. I have a bottle of infused sesame oil, a bottle of infused olive oil, avocado oil. I found for most people, they’re not going to have nine infused oils in the house. We suggest a good quality canola oil or a mild olive oil or a coconut oil. It doesn’t really have a flavor of coconut. The beauty of a coconut oil is it can also be topical. So I always have a big jar of coconut oil that I use in smoothies, and I use it if I hurt myself. If I strain a muscle, I rub it on and it works really well.

C&T Today: What’s something on the scientific side of cannabis cooking that the general user may not know?

So THCA, which is the compound in the flower of cannabis, is activated when you smoke it. So if you smoke a joint, the THCA is turned into THC, which is psychoactive. In order to cook and get high, the THCA has to be turned into THC. So that is where the process that comes before the cooking happens, and that’s called decarboxylation. And that means that you’ve taken the cannabis and treated it with heat in order to turn it into THC.

And so when I do a step-by-step with people for recipes or when I’m teaching a class, you must decarb first, and that’s at low heat for about 45 minutes, and that activates all the THCA and you’re ready to infuse. If any of the THCA has not converted during the decarboxylation process, it will happen during the infusion process.

So when we are testing our oil, once in a while we will ask for those results to see if there’s any percentage of THCA left or we were successfully able to convert it, because most people are wanting the high. I know not everyone, and that’s where CBD is such a beautiful part of this whole culture because it does great things without the psychoactive part of the plant.

The plant is made up of cannabinoids and terpenes. Terpenes are what informs the flavor and the aroma of cannabis, and heat can cause loss of different terpenes in cannabinoids. So the lower the temperature the better.

So when we infuse, after we’ve decarboxylated, we infuse at low heat for several hours. And using low heat, we’re able to keep as much of the plant as we possibly can. If we were to put the cannabis in an oven, like a 400-degree oven, we are getting too close to where the only thing left in the plant is the THC. And what we want is called “full spectrum.” We want people to get the most they can from the cannabis plant and preserve as many of the cannabinoids and terpenes as possible, not just the THC.

The more you get out of the plant, the better, the better your high, the better it is for you. So low heat. Make sure you’ve activated the cannabis.

C&T Today: The CBD side of the industry has been fascinating to watch as well.

LW: On our CBD side, we work with a CBD farm. They’re called East Fork Cultivars and their CBD is phenomenal. I think they’re going to have national recognition pretty soon because they’re partnering with a bunch of big companies. I feel like the cannabis market is kind of like the boutique wine business where I’m noticing lots of different demographics coming into the industry. All these old people, like me, are calling me all the time [to see] what can they do for getting off Ambien or getting off the pills for arthritis. And dispensaries are far more upscale, like the whole cannabis lifestyle is emerging.

I’m working on a new book, and it will be all about cannabis lifestyle. So I’m getting all these products for beauty, like fancy pipes that are gold plated for $1,000. It’s just amazing to see this happening.

C&T Today: What are some of your personal favorite infusions?

LW: There are two things that I love infusing. I love infusing chocolate bark. So for the holidays, I just make tons of it and give it out to friends; white chocolate, dark chocolate.

I also love cooking with filo dough. That’s like what’s in baklava, you know, what the pastry is, very, very thin sheets of dough. And you brush it with infused oil and every layer kind of separates and it’s a flaky, delicious way to infuse. So in terms of desserts, sweets, I love chocolate bark and anything I can make. So I use puff pastry or filo dough for appetizers, to make tarts, vegetable tarts or for desserts, baklava, or any kind of tart, because it infuses beautifully. Each layer absorbs the oil. I don’t know, I just love it. And people go crazy. And you don’t have to make your own. You buy it and you’re just brushing
the sheets with the infused melted butter
or oil.

All photos courtesy of Laurie + MaryJane