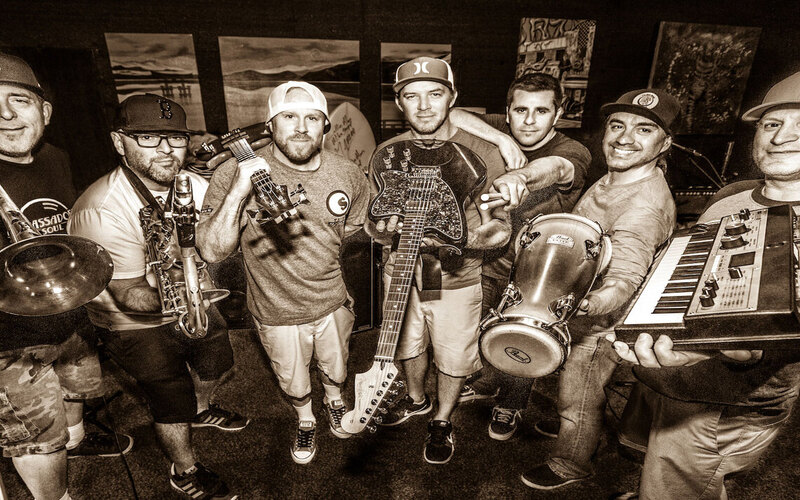 Imagine standing in a crowded amphitheater. The first few notes of your favorite song ring out from oversized speakers. A wave of energy courses through you as thousands of people start moving in rhythm. The shared connection is unmistakable.

There is no feeling in the world quite like enjoying a live concert on a summer night.

The pandemic stripped us of that unique and awesome experience. Now, for the first time in two years, many bands are returning to the road for live shows.

The reggae, rock-fusion band Slightly Stoopid is among them. Their Summer Traditions 2022 Tour kicked off July 7 in Bonner, Montana. It’s the first in an epic concert schedule concluding this September in San Diego, California.

The ensemble was formed by Kyle McDonald and Miles Doughty in the mid 90s, pairing a unique style of California funk with reggae-inspired roots.

Over the past two decades, Slightly Stoopid’s sound has evolved but its message has consistently called for cannabis reform. In 2017, they created a 12-inch “vinyl” record made entirely of hashish to raise awareness for cannabis legalization.

The band launched its cannabis brand Stoopid Organics in mid 2021.

Collie Man Kush, named after one of the band’s hit songs, is an indica blend touted as non-drowsy and productive. The brand is also offering a pre-roll, Stoopidhead Hammerhead, infused with THC diamonds. Products are available through select vendors in California.

Cannabis & Tech Today spoke with Doughty just before the band kicked off its summer tour to discuss his return to the road and why he’s been such a passionate advocate for cannabis the last 20 years. To hear the full interview, visit www.cannatechtoday.com/podcasts.

Cannabis & Tech Today: How did being on hiatus for two years from the pandemic impact you and the band?

Miles Doughty: It’s just crazy when you’ve been on the road more than half your life. Then all of a sudden, you’re not on the road for two full years — something that hasn’t happened since I was a teenager.

[It was] definitely a mental adjustment, even physical, just because you’re used to being gone, six, seven months a year. Then just being home. One nice part about it is we all have families, so there was time to reflect and enjoy being a dad and enjoy your own town that you never see.

C&T Today: What are you most excited about when you think of returning to touring?

Miles Doughty: I think just the camaraderie with all my boys. This summer tour package, we’re friends with all the bands and it’s really a fun package from Fortunate Youth to Common Kings, Pepper. Even at the end The Elevators are going to get on some shows and it’s just like a really fun summertime package.

We’re going to make a point to really enjoy it like we used to back in the day — the barbecues after the shows, everyone going to the rivers, the beach, the mountains. We really want to embrace it more.

C&T Today: Slightly Stoopid has been making music about cannabis for a long time. What do you think has changed most about cannabis culture since the band formed in the 90s?

Miles Doughty: It’s so open and free now … It’s weird because you kind of pride yourself on the way you grew up smoking weed and where you got it from, like all the local growers.

It’s nice that it’s legalized, but there are dispensaries on every corner. In all honesty, most of the stuff with dispensaries is crap in my opinion, because it’s meant to serve the masses.

When you have a private grower, they love that plant. He’s not necessarily growing 50 pounds, he’s going to grow like six ounces of the dank, that’ll just make your eyes cry when you smoke it.

And it’ll take you to a different planet when you’re being creative. That’s what I loved about that era.

C&T Today: Are there aspects of legalization you don’t like?

Miles Doughty: I definitely preferred when it was more under the radar. Now, you just walk down the street in your neighborhood and everybody’s smoking a joint … I love that people love that it’s legal and you can get it, but there’s also a boundary that has to be somewhat set.

I think everywhere you go, if people have kids and everyone’s blowing weed smoke everywhere, you’re just like, “Whoa, whoa.” Can we go back to where you had to go around the corner and be [discrete]?

C&T Today: How have you seen cannabis play a role in wellness?

Miles Doughty: There are so many cancer patients that CBD has saved. My dad’s a perfect example. He had stage four cancer and he was doing all this stuff that the hospitals wanted to do.

And then he just started pumping with CBDs, like crazy. His last cancer check, the doctor literally was like, “I don’t know what the fuck is going on, but your cancer is literally decimated in your body.”

He was taking all this medicine for cancer and then it was the CBD that brought his [cancer] down. It was just incredible. Literally the doctor was like, “What are you taking Ken?” And he’s like, “I’m taking this and this [CBD].” And he is like, “Don’t stop.” My dad’s living proof that it does work, so it’s pretty incredible.

Miles Doughty: We’re working on the new album right now. We leave next Tuesday for the summer tour with Pepper, Common Kings, Fortunate Youth, and The Elevators. It’s going to be insane, 32 cities, it goes all the way till September 3rd. We’ll end in San Diego at Petco Park.

Then pretty much just finish the record in the fall and get it out for [2023]. We’ve got a few singles lined up, we’re just in the finishing process right now. Once we hit the road, we collaborate with all those bands that are on the tour.

It’s going to be awesome. The best part of touring is when you’re doing those kinds of hangouts and situations where, for some ending songs, there’ll be like 18 people on stage playing the song because all the bands are involved in it. That’s the special part.

Want More Like This? Read the latest issue of Cannabis & Tech Today.

Header and other images courtesy of Keith Zacharski.