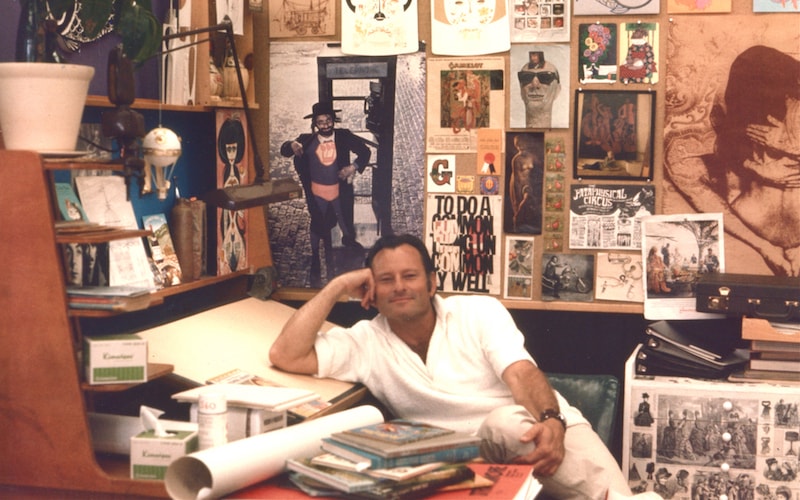 You may not know Rolly Crump, but chances are he’s contributed to the soundtrack of your life. Have you visited a Disney park, ridden It’s A Small World, and spent weeks or months either fighting off or adoring the theme song as it loops in your mind?

If so, then you’re acquainted with this white-haired, warm, and engaging creative force. He helped build out and oversee the design of the  most popular ride in Disney’s history, which has been a source of joy to five generations since it opened in 1966. He also put together The Enchanted Tiki Room and contributed to countless Disney cartoons and animated features. As one of Walt Disney’s fabled “Imagineers,” the now-88-year-old animator-illustrator-designer poured his considerable talent into one memorable project after another, none more symbolic than Small World.

“We first realized how big ‘Small World’ would become when we built it for the 1964 World’s Fair,” Crump recalled, his warm, engaging spirit already drawing in his guests for story hour. “It was the first time we saw how the song defined the ride. The way it was rigged up, we had one switch to handle all the electrical – lights, air conditioning, the boats, everything. When it broke, we had to go in and get everything going … except the song. It kept playing and playing … and people at the fair kept singing it, even when they were on the other side of the grounds.”

Two years later, Small World redefined Disneyland with its combination of dolls, landscapes, and cultural items from a hundred nations, set to a gentle, winding boat ride inside a colorful façade of clocks, chimes, and bells. From the outside, it looks like the world’s most amazing toy box on rocket fuel. 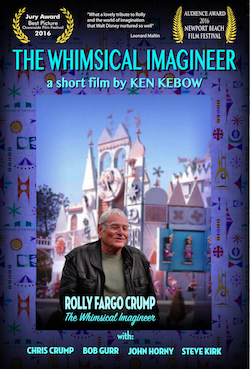 Small World and Crump’s approach to his life and work led to his nickname, “The Whimsical Imagineer.” He has been featured in an award-winning documentary of the same title, produced and directed by Emmy Award winner Kenneth Kebow. The Whimsical Imagineer brought down the house when it was shown to a standing room-only audience in 2018 at Disney Animation Studios, where Rolly created some of our greatest childhood memories.

Among other things, the film showcases how much Walt Disney valued Crump. They worked together during the last ten years of Disney’s life, when he was building out Disneyland, secretly buying land for Disney World, and feeding the childhoods of Baby Boomers with animated features, cartoon series, The Wonderful World of Disney, and instructional nature and social studies films in classrooms. In The Whimsical Imagineer, Rolly’s diverse talents as a model builder, animator, mobile builder, cartoonist, and project designer are all celebrated – a daily occurrence at Disney Studios.

“If an idea came up, you just did it,” Crump recalled. “It was nothing complicated, not like now, where everything has a study group or you must stay in your set job. We had to design something, we had disciplines to follow, and we did it. Because we were constantly designing things we’d never done before, everyone was winging it. We didn’t know the toys (for Small World) would be made of papier mache; we came up with it. That’s how it was working with Walt. My, was it creative! We had a tremendous amount of freedom to do what we wanted.”

It also went for his creations away from Disney. Like many young Disney animators in the 1950s, Crump could not afford the $30-per-week entry-level pay. He began looking for ways to supplement his income, painting and drawing subjects that fascinated him: creative “gods and goddesses” like entertainer-activist Josephine Baker and innovative sculptor Alexander Calder, who designed the world’s greatest mobiles. He also painted burlesque scenes, masks and tikis, and sleek, sexy pictures that also featured complex moods and expressions, some shadow inside the whimsy and fun.

“I became a sponge working with Walt,” Crump said. “I absorbed and learned about everything. I was so thrilled, and so happy, just being this curious learner, being a sponge. Walt was like that, too: he was always looking for something he’d never seen before. I always tried to show him something he’d never seen, which is boiling the imagination to the surface. That’s why we were called ‘Imagineers.’”

Many acclaimed artists created pieces far removed from their most famous works. Examples include Dr. Seuss, Charles Schultz, and Bugs Bunny creator Chuck Jones. Add to that list Rolly Crump, who painted well outside the bounds of Disney propriety at times to make extra money, and in the process, created a nice side business selling posters of his works.

Crump’s first poster caught everyone’s eye: “Smoke Marijuana.” The drawing features a wooden Native American, like those that dotted Route 66 and other highway trading posts, souvenir shops, and rest areas to promote tobacco. It features sayings both hilarious and hip. Two things stand out: first, a Disney artist created it. Second, he started selling it in 1957, when the Beat movement was in full force, but marijuana was strictly taboo. He drew it for The Unicorn, L.A.’s top Beat-era coffeehouse, but it became a part of L.A. underground history people still want to take home. It has sold for 61 years.

“If you look closely at the poster, a lot of the phrases I wrote were used then,” Crump said. “I loved that scene, the people, the coffee houses, the cannabis, the whole underground feeling. It helped me develop a style, a way of thinking, looking for things that were different … It goes back to being a sponge. You absorb it, squeeze it around your head a few times, then it squeezes out.”

The way Crump conceived the marijuana poster reflects his ability to boil new ideas into his work. “I was going to night school, and the teacher said, ‘I want everyone to design a Christmas card, but make it look like an old wood block cut,’” he recalled, a smile stretching across his face. “I went to the library, dug out a book on old lithographs and block prints, and found this picture of a wooden Native American. I bought one and stared at it in my office, wondering what to do for my Christmas card. 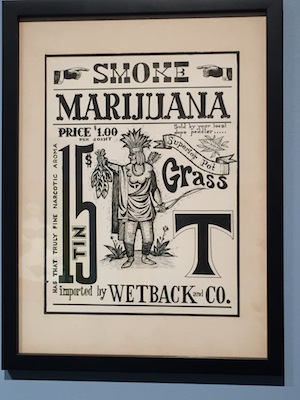 “Then it came to me: I’ll just have him say ‘Smoke Marijuana’ instead of ‘Smoke Tobacco.’ When people who worked at Disney came into my office and saw it, every one of them said, ‘If you ever get it printed, we’ll buy one off of you.’

“Will you give me a dollar for it?” I asked.

Crump took his design to a printer in Toluca Lake, just down Riverside Drive from Disney Studios – and hit a snag. “He looked at it and asked me, ‘Are they legal?’” Crump recalled, finding the question almost ludicrous today. “‘Why wouldn’t they be?’ I said. ‘It’s a joke – it’s tongue-in-cheek.’

“When I explained that to him, he was fine. Before that, he was scared to print it, because it was considered illegal to print anything with positive messages about marijuana. Because the copy was humorous, I got away with it. You couldn’t promote marijuana in any serious way … which leads to other stories.”

Crump’s poster caught fire with a growing legion of buyers. Sometimes, as he recalls, the interested parties turned out to be major surprises.

“I remember one shop on Ventura Blvd., a very contemporary furniture store. The owner loved my poster,” he said. “The guy glued them to his front windows. One day, a police car pulled up. I thought, ‘Oh, God…’ We didn’t know what was going to happen. Four or five cops in the car ran into the store – and the owner ran out the back, leaving his wife at the counter. He thought he would be arrested. One of the cops asked his wife if they were selling the posters. After she said, ‘Yes,’ he said to her, ‘We’d like one.’ So they bought a marijuana poster!”

Today, Rolly Crump lives with his partner of fifteen years, Marie, in their coastal San Diego County home. He recently auctioned off most of his original work, while The Whimsical Imagineer continues to tell his creative story at pop-up theater engagements and on DVD. His works hang in homes, studios, and museums throughout the world, and he loves to hold center court about creativity, artistic expression, Walt Disney, Small World … and the journey of his iconic marijuana poster.

“I’m just lucky,” he said. “I wanted to work for Disney ever since I was a little kid, I did that, and I wanted to paint, illustrate, or build whatever else came into mind. I’ve been lucky enough to do that, too.”

Seth Rogen and the “Enabling” Culture in Cannabis

Your Gratuitous 420 Post! Products, Events, and More for Cannabis Connoisseurs