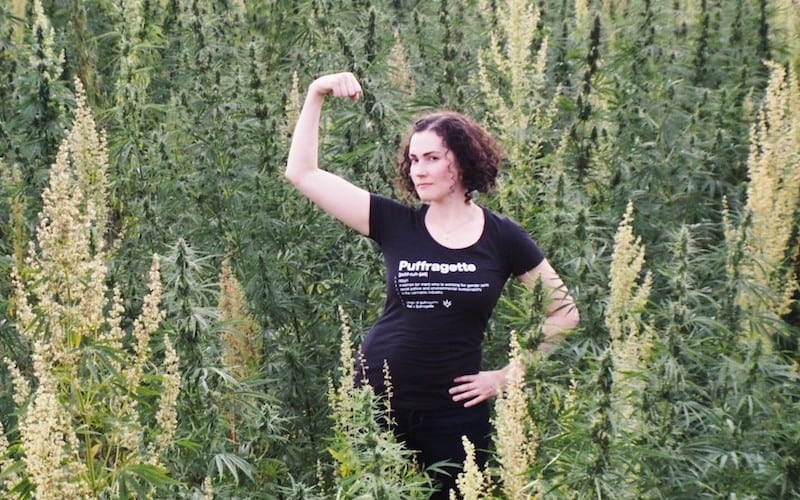 Puffragette [puff-ruh-jet]: a woman (or man) who is working for gender parity, social justice, and environmental sustainability in the cannabis industry.

Ganja Girls; Green Goddesses; Mary Janes. There are many names for the women in the cannabis industry. However, Windy Borman, director of Mary Janes, never quite felt those names truly captured the work of these leaders.

When she began her new project, Borman had noticed a trend in the business of cannabis: female leaders were coming into the space at full force. A brainstorming session with her team would result in an appropriate name for these pioneers: Puffragettes.

We had the chance to discuss with Borman her inspiration for the project, how women fit into the space, and the future of gender in the industry.

Cannabis & Tech Today: How did you first get into the cannabis industry and where did this idea of a “Puffragette” come from?

Windy Borman: I was a cannabis outsider. I’d actually never used the product, but I couldn’t ignore hearing all of these amazing stories of women having success in the industry. I think that really got my attention. In 2015, they said that 36 percent of senior leadership in the cannabis industry was female. And the national average is 22 percent.

There was something about cannabis that was attracting more female leadership. So that intrigued me, you know? I started interviewing people over the phone to try and wrap my head around this. I ended up speaking to over 100 people.

What I started to see was, not only was cannabis connected to gender parity, but it was also connected to social justice and environmental sustainability. And those three core values had been present in all my other projects. So even if I didn’t understand cannabis, I had access points to try to help have this conversation. And if I could highlight the female leaders who were leading this new industry and building corporate responsibility into the foundation of it, that was really intriguing to me as a filmmaker.

As we were putting all these things together, we were trying to figure out, “Well, what do we call these women?” There are a lot of really cute names like “Mary Janes,” “Women of Weed,” “Ganjapreneurs,” “Ganja Girls,” “Green Goddesses.”

But none of that really felt like it was doing their work justice. So it was a brainstorming session with me and my marketing team members and the word “Puffragette” came out of it, and we were like, “It’s perfect.” We define a Puffragette as a woman or man who’s working for gender parity, social justice, and environmental sustainability in the cannabis industry.

C&T Today: How do you feel women’s roles in the cannabis industry, both as leaders and consumers, are unique?

WB: I was actually at a cannabis convention filming and a gentleman came up to me and he said, “I’m so glad you’re doing this film because women are going to be what saves the industry.” If we don’t have the female influence on it, cannabis could just end up stoner dudes and Coors Light.

That’s the challenge that we run into, right? How do we make sure that doesn’t happen? Well, you do that by making sure you have diverse leadership at the table. We see this across all industries; when we have more diverse boards and more diverse leaders, the companies end up being more successful because we have a more diverse perspective on things.

That said, I do see a skill gap between activists and industry. The people that have built the cannabis industry started as activists so they have the passion there. They have the knowledge there. But, they may have never written a business plan before. They may not have put together a pitch deck. They may not have all of these other business skills, but those are things that we can fix, right?

That really comes down to two key things. It’s access to funding and it’s mentorship. If we look at general startup funding, women get about two percent. People of color get less than one percent. That means 97 percent of startup funding is going to white men.

So, to be more successful, we need to make sure that we have equity programs in place that are getting these other leaders — the women, the people of color, the LGBTQ community — involved in being the CEOs and the founders of these companies.

WB: I’ll answer that in two ways. First, it was about corporate culture. Women didn’t have to be satisfied being the Senior Vice President of some company and seeing a bunch of men get promoted above them, you know? They could start the company, be the CEO, be the founder, and then also hire the colleagues that they wanted to work with. They get to work with more diverse people, more diverse perspectives, and create more successful companies. So that was the first thing.

Then the second opportunity that cannabis provided for women is they get to create the products that fit into their lifestyle. They get to create the odor-blocking purses that are going to fit into their briefcases to keep their medicine. Or they can create the solvents that they can put into tea. So, they’re already using their products in their lives and it’s an easy way to get cannabis in. They don’t have to really change what they’re doing.

C&T Today: Do you plan to continue to follow the cannabis industry as a filmmaker?

WB: Yes. Our hopes have always been to brand this conversation about women in cannabis with a film and then ultimately turn this into a docuseries. The wonderful problem is there are so many women leading cannabis in the U.S. and around the world that we could keep filming and keep telling their stories. I would love to be able to do that.