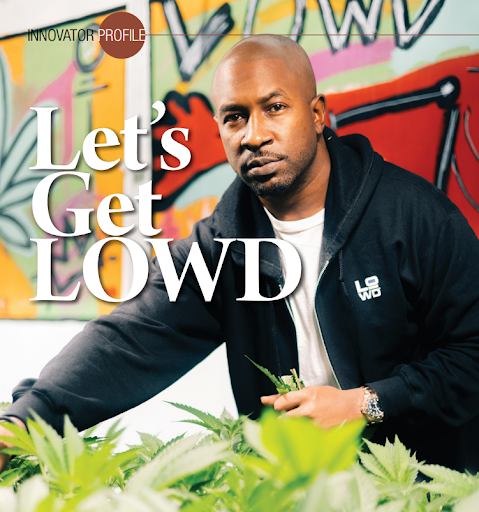 There was a time, not so long ago, when cannabis was a culture rather than an industry. It inspired kinship between people — a bond over a shared pastime. This comradery is partially what inspired Jesce Horton to launch LOWD, one of Oregon’s most respected craft cannabis companies. LOWD is an acronym for Love Our Weed Daily. It’s a motto the company instills into all of its award-winning flower, which is lovingly tended with custom lighting and racking systems before hitting the curing room for preservation in glass jars.

Horton has a passion for cannabis and “stoner culture,” as he refers to it. As cannabis trends toward becoming an industry, full of professionals peddling a sterilized version of what was once a beloved counterculture, Horton wants to represent the “real connoisseurs and stoners” like himself. While this desire to preserve the culture is commendable, he’s doing it in a notably non-stoner way.

He majored in industrial engineering and minored in mathematics and physics at Florida State University. He co-founded the Minority Cannabis Business Association (MCBA), the first and largest non-profit organization devoted to creating equal access and economic empowerment for those most impacted by the war on drugs. Horton is on the Board of Directors for the Resource Innovation Institute (RII), a platform that creates energy efficiency solutions and standards for the global cannabis industry.

His work in the cannabis ecosystem is expansive. He has served as an advisor for federal, state, and local cannabis regulatory committees. He’s working with Ben’s Best, a funding venture for Black-owned cannabis companies led by Ben Cohen of Ben & Jerry’s.

Horton is a renaissance man. He can do it all and he’s helping others as he climbs the ladder of cannabis success. He and his wife Jeannette Ward Horton launched the Nu Leaf Project in 2019 to deliver grants, loans, and educational resources to cannabis business owners and career hopefuls throughout Portland, Oregon. For this issue’s Innovator Profile, Cannabis & Tech Today spoke with Horton to better understand the state of sustainability in the cannabis sector.

Cannabis & Tech Today: What inspired you to start working in this industry?

Jesce Horton: Really, passion. I’ve been a stoner since I was 16 years old. I always felt out of place as a result of being in the Southeast, where that’s a lot more taboo than it is in the west. But also being in the professional atmosphere in engineering. Even though a lot of people did smoke and did consume, it’s never anything that you would want people to know. So just really always feeling out of place for having a love for it. Ultimately, finding myself in Portland, Oregon at the start of the medical and recreational cannabis revolution was just a perfect alignment for me to be doing what I enjoy, but also find ways to add a lot of value to the industry.

C&T Today: What makes LOWD unique in the cannabis space?

C&T Today: What are some of the biggest barriers preventing growers from embracing environmentally-friendly practices?

JH: The biggest barrier is a willingness to change procedures. Even in some of the best cannabis cultivation spaces, indoor, you may have six harvests a year right in one room. Because it’s such a high-dollar crop, changing a procedure can sometimes really be scary. There’s so much at risk. There are so many things happening. The industry is so competitive that you may tell me I can improve my efficiency by 20%. But if I fear that even one time, I’m going to lose 30% in my harvest, then I’ve just erased all of those gains that you’re telling me about.

That’s where organizations like Resource Innovation Institute are important. [It] brings all the stakeholders together by having the data — and not just opinions — to help people to make these decisions.

JH: When you look at solar, when you look at wind power, even though it is a smart move, these are typically longer payback periods. Maybe a year, two years, five years, 10 years before they can truly realize that investment. Government incentives have a lot to do with dropping those payback periods down.

We have to understand the industry is very young. People are still trying to compete and stay alive. They’re going to be slow in that period versus a more mature industry. So there are a lot of things that make it less prevalent but still smart depending on where people are.

C&T Today: How does automation play a role in the efficiency of a cultivation facility?

JH: There’s a line to walk I think in any industry as it relates to how you implement automation and robotics. It’s going to hopefully supplement what a person is doing. A lot of times it’s going to replace people. There are a lot of places for more automation and more intelligent computers in grow facilities. Primarily as it relates to data collection,
human-machine interface. How do we make sure that we’re collecting the data and then getting it to people in a way that is not just a spreadsheet — getting it to them in a way that has actionable steps?

There is a big space for the implementation of computers and data assessment and technology and automation. But there is only so far that can go, ultimately, when you’re trying to optimize the growth of a plant.

C&T Today: In our last issue, we had two different articles about the future of agriculture for cannabis. One argued that cannabis grown outdoors is more environmentally friendly as it requires fewer inputs. The other argued indoor cultivation is the future because you can be so precise with resources because of advances in automation. As someone who’s had an up-close view of the industry and sustainability, do you feel there’s space for both? Or is the future of the industry leaning one way or another?

JH: Wow, I wish I had a canned answer for that because it’s such an important question. And I think it’s really simple, in that we must have both. Outdoor cultivation is so limiting and becoming even more limiting for several reasons. One, because depending on the part of the country you’re in, it severely limits your ability to produce quality flower. Two, because of the climate changes we’re experiencing. We saw so many farms wiped out by forest fires and typhoons that ultimately decimate the value of the crop for our entire community … If I could concisely answer that, I would say without a doubt we need all forms of cultivation to fuel the demand for our industry.

C&T Today: Co-founding the Minority Cannabis Business Association and working with so many different companies, what do you see most cannabis businesses get wrong when it comes to diversity in the workplace?

JH: I think what people get wrong with diversity in general, is that this is about morality or primarily about doing the right thing. I think that’s how people tend to look at it. As a result, it tends to fall to the wayside. I think what people have to view it as is the most important business decision that companies can make right now. As you’re trying to develop a brand with a product that is used across every demographic, every race, every age, every background, to not view building that brand and not view making that product in a way that appeals to as many as possible, is a big mistake. It’s something that is limiting a lot of companies.

C&T Today: Do you feel a lack of cultural diversity has an impact on the sustainability and longevity of this sector?

JH: Oh, certainly, without a doubt. When you look at the illegal market, it will always exist. It has always existed. And if people don’t see a place for themselves in the newly formed industry, they will support the traditional means. They will support their friend who’s selling cannabis. They will support their cousins, people they know, people who they know where their dollars are going. [They want to be] feeling good about where they’re spending their dollars and feeling like they can talk to someone who understands how they want to consume, the products they want to consume, and the methodologies that they’re consuming, which are still very cultural. So it’s something that has to take more priority if companies want to develop a sustainable brand — one that will last and one that will demand some loyalty.

This article was first published in the spring 2022 issue of Cannabis & Tech Today. Read the full issue here.