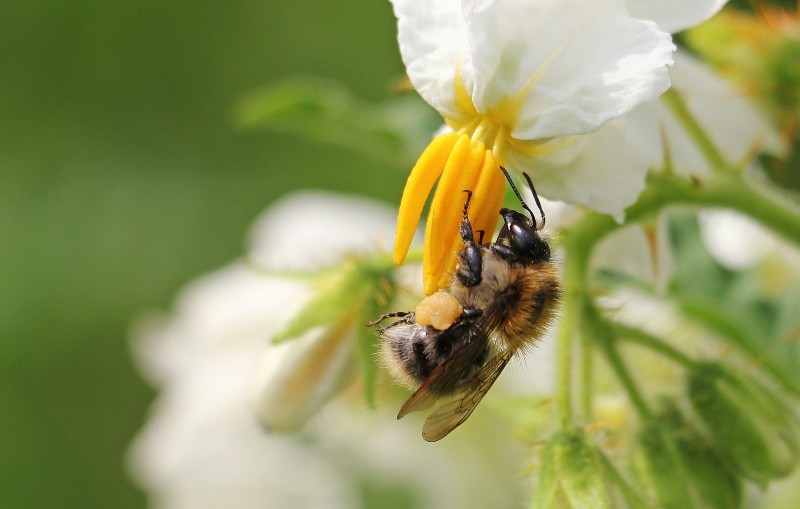 Worldwide there are more honey bees than any other type of pollinating insect. Honey bees are literally the world’s most important pollinator of food crops.

Researchers estimate that as much as one-third of the food that humans consume globally relies on pollination by bees.

The hemp plant could play a key role in reviving the global bee population.

Two recent studies found that bees love hemp. In the first study, researchers set up nearly a dozen traps around industrial hemp fields and collected bees over the course of several days.

Researchers conducting the study concluded that “industrial hemp can play an important role in providing sustained nutritional options for bees during the cropping season.”

The second study looked at the height of hemp plants to see if there was a correlation between large hemp plant size and how popular taller plants.

What researchers found was that “plant height…was strongly correlated with bee species richness and abundance for hemp plots with taller varieties attracting a broader diversity of bee species.”

Plant Hemp Everywhere to Save the Bees

Bee populations around the world are dying off at a rate that should shock everyone. Below are some examples:

Declining bee populations are not isolated to one part of the world, as the examples demonstrate. No country or region is immune.

The ecosystems that bees rely on need to be teaming with pollination options.

If countries around the world want to address the bee death epidemic, which they absolutely should, those countries need to plant as much industrial hemp as possible.

Save the Bees, Clean the Soil, Improve the Environment

In addition to helping save local bee populations, the hemp plant also has the ability to help clean up contaminated soil via a process known as soil remediation.

Soil remediation involves a plant, the hemp plant for example, removing toxins from contaminated soil. The hemp plant is particularly good at facilitating this process.

One hemp plant has the ability to help clean up soil, help save the bees, and the harvest can then be used to make sustainable products, textiles, and building materials.

Hemp can be turned into hempcrete which can be used to make sustainable structures.

The hemp plant alone may not be able to save the world, however, it is one of the most powerful weapons that the global community has to combat environmental issues, including saving bee populations.

Leaders around the planet need to recognize the benefits that planting hemp provides and plant as much of the versatile plant as possible.