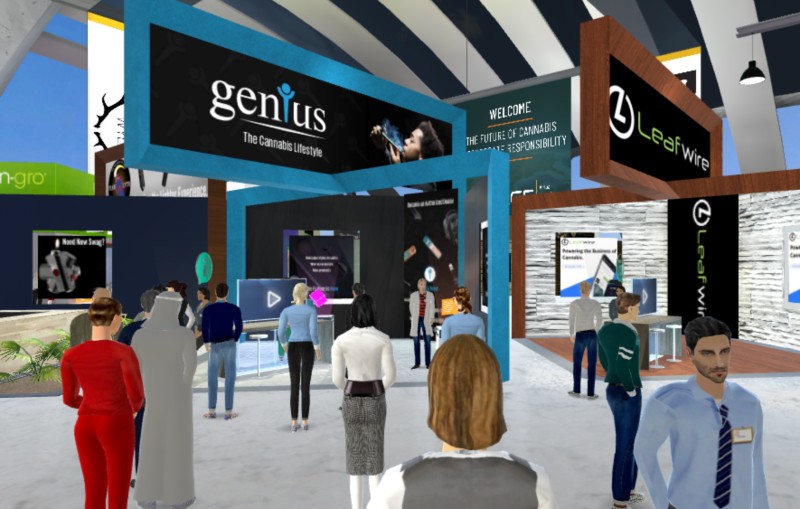 Almost 1,200 eager attendees poured into the futuristic world of the Emerge Virtual Cannabis Conference & Expo on day one.

Attendees explore exhibitors and sign up for giveaways at the Fritsch Milling and Sizing booth.

Sharply dressed avatars mingled around booths and roamed through three floors of exhibitor booths while eagerly awaiting sessions from more than 45 speakers.

Although some of the 300 same-day registrants had challenges logging in and accessing the platform, most were excited for the features and immersive quality of the experience.

Seeing old “faces” and reconnecting was a definite highlight of the event.

The first keynote of the day from Steve DeAngelo featured some notable insights.

The industry pioneer touched on the value of hemp as a food, fiber, and fuel, and the integral role cannabis will play in the medical field as research expands.

He graciously waited with the Emerge team while they worked through a few technical snags before proceeding with a powerful speech.

The duo’s relaxed energy and enthusiasm for the topics helped round out a diverse and talented lineup of speakers while raising awareness for their podcast Weed & Grub.

Wanda James delivered an inspirational keynote on the “powHER” of women in business,. The entrepreneur quoted some of history’s most influential figures to culminate in a rousing call to action:

Whether it was industry-leading journalists sharing a laugh and a toke during the cannabis media panel or influencers lingering in a star-lit corner of the conference for a virtual smoke sesh, there were plenty of unexpected moments of camaraderie.

The first conference where I can hangout with people while they smoke cannabis. Thx @EmergeCannabis ! CC: @SohumJShah pic.twitter.com/Ff6pkmtLiA

Though the evening wouldn’t have been complete without some admittedly distracting technical malfunctions, panelists were gracious and attendees were patient. 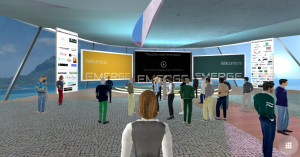 Attendees gather in Auditorium A for a day one keynote.

As the old adage goes, “The show must go on,” and our speakers certainly had that idea top of mind as they pioneered forward in this new virtual world of interaction.

Day two has even more attendees registered and ready to explore the Emerge virtual world.

The event’s planners are aiming for inspiring speeches, shared experiences, riveting panels, and a night packed with motivation and music.

Exhibitors have giveaways planned (like a new chiller from Polyscience, free pre-rolls from STM Canna, and free Emerge merchandise from Fritsch) all of which will be announced live during the event.

For the full schedule, check out https://emergecanna.com/agenda/, or put your avatar in its party shoes and walk around the expo halls to discover for yourself what “Emerging” is all about, even during a global pandemic.