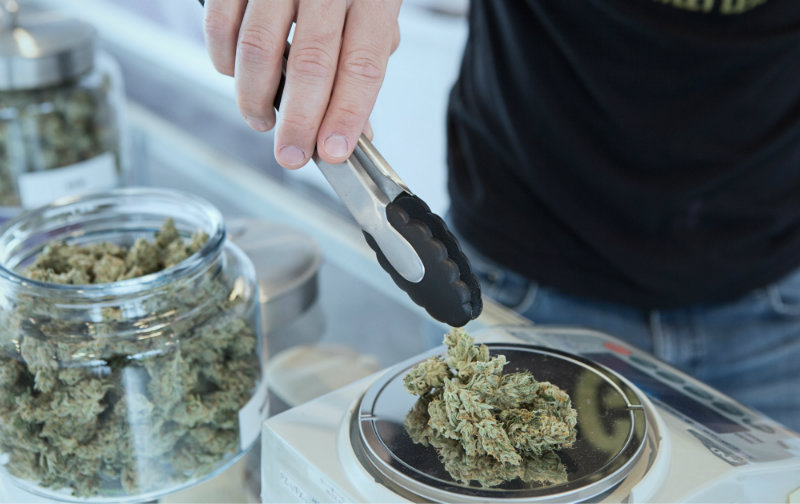 I am excited about the “new normal” that seems to be afoot. Having survived the late 60s, 70s, and 90s without addiction and rehab, I am no stranger to the use of illicit and legitimate drugs.

(I know I skipped a decade there – it wasn’t a heavy drug time like the others. We were focused on making money. We made up for it in the 1990s). Today at 64, I’m a full-fledged, aging, baby boomer hippie.

Where I live, marijuana is legal for medical only, which limits all the marketing, glitz, edibles, and variety of choice. In states where it is legal for recreation, the blitz is on! And so, with a vacation planned to visit family in the “legal” states, my marketing research project was about to begin with a visit to my first dispensary.

I made my first venture into “cannabutter” at Christmas. I did all the math so I could reasonably make each piece of a family recipe for hand-made caramel, 10 mg of THC (thank you STEM education). People thought it was awesome; I felt stoned when I took them – but were they as good as the commercial products? I had to know. Now it was time for that first visit to a legal cannabis dispensary.

Southern California dispensaries and Colorado dispensaries were my only market research grounds. California is replete with billboards, flashing “buy from us” signs, delivery options – the works. Given the number of customers streaming in and out of these places, all shapes, sizes, ages, walks of life – is everyone pretty much stoned in Southern California?

I know the two weeks of my own trip – yup, I was stoned every day. Market research! I had to try different edibles – gummies, licorice, espresso/chocolate beans (oh yeah – my favorite) in different doses of 5 mg and 10 mg.

The dispensaries in California have “budistas” as customer service reps. Seriously, that’s the position title – budista.  Those for whom visiting such a place is routine, there would be no sense of “wow” with that. But having used such products in the backs of cars, around 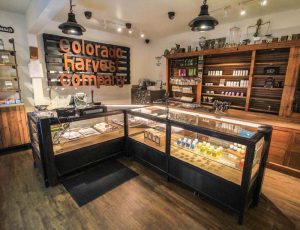 A typical dispensary counter in Colorado. Photo by Alex Person on Unsplash

garages, basements, and overall “on the sly”… it is a revolution for all of us aging baby boomer hippies. (Yes, I really am that old).

It reminded me of going into a Beverly Hills make-up counter. The walls were lined with mirror-backed arched shaped glass displays with each product the company offered on different shelves.

All the products were packaged brightly, color coded, with notable logos – all sorts of edibles, prerolled joints (with little tips – like a mini cigarillo). Each brand had an “archway” and four to five shelves with overwhelming choice.

By the time we made it to Colorado our bags were full of enough edibles to see us through that entire trip. Colorado though – by contrast – was far more discreet with dispensaries.

No billboards, no home delivery promises. A few billboards warned that using pot in public was still illegal. But that was it. Inside the dispensary, however, the display and ambiance were just like the ones in California: upscale and consumer oriented.

Legal Cannabis as the New Normal

When I think back to my high school years we always used “legalize marijuana” as the persuasion argument for English or speech. It was the mantel we all chanted for and we could have NEVER imagined the marijuana stores we have today; or that an entire population is just stoned, ever so slightly, every day. For a large population, daily marijuana IS the new normal. In my lifetime this became a legal reality.

Once home I still had my latest batch to make the comparison with the commercial products I had become so accustomed to taking every day. Of course, that required staying pretty much ever so slightly stoned daily for another 2 weeks!

I alternated between my home-made and some of the espresso beans. AWESOME – I love marijuana’s new normal. So much so, there was literally a brush fire near my home to the point where we were supposed to evacuate.  I made sure that the whole box of caramels was IN THE CAR. The espresso beans were long gone.

As an aging baby boomer hippie, I have argued my entire adult/teenage life that marijuana should be legal. By golly we made it. Maybe not everywhere for now; but likely everywhere – eventually. Look at Canada! Nationwide.

There are the detractors arguing addiction, of course. But I have a harder time giving up coffee than I do being stoned. When was the last time you weaned yourself off caffeine? Much less Starbucks Cold Brew?

With all this “marijuana new normal” and legalization creeping in – cookbooks on edibles, magazines, medical research – I have to say retirement is looking better all the time. Too much gardening and some aches and pains? I know! How about an edible with that Cold Brew? When invited, should I inquire exactly what is meant by having High Tea?

In 1979, I taught an English class for summer school. My students wrote, produced, and acted in a pseudo–Saturday Night Live type of program with skits. We invited faculty, parents, and other classes.

The skit I still recall fondly (not everyone thought it was as funny as I did) was the scenario where “Now that Marijuana is legal, we are providing a taste test outside of the grocery store of different brands to see if the walkers-by can identify our top selling brand, Acapulco Gold.”

The students had a table and different piles of oregano and had three different people come by and pretend to smoke these different joints with all the mannerisms associated with smoking a joint. Each of course, choosing the brand being promoted. The skit ended with two students jumping out from behind the curtain singing – “No stems, no seeds that you don’t need… Acapulco Gold is… Badass weed.”

That was 40 years ago. Still funny. Still in my memory. We haven’t made it quite that far – but certainly we’ve made progress. It is the new normal? I sure hope so. It is for me, anyway.