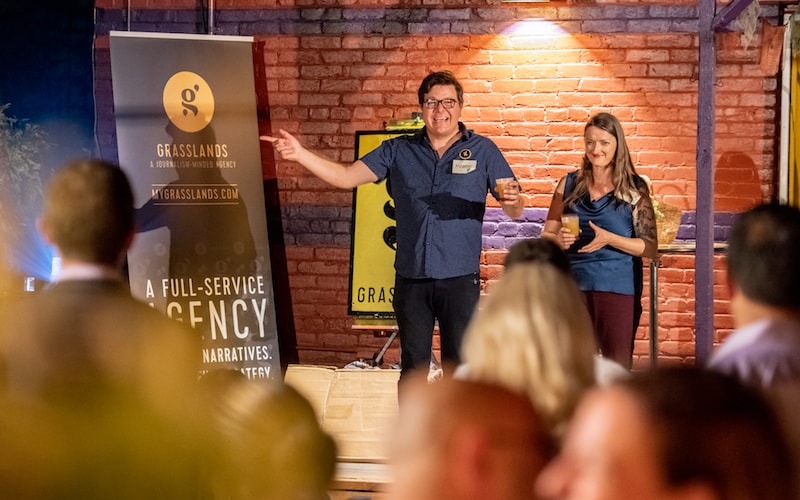 There are few people involved in the cannabis space who are as passionate as Ricardo Baca. His enthusiasm for journalism and responsible drug policy has taken him all over the world, speaking at events such as the National Cannabis Policy Summit, the O’Cannabiz Conference and Expo, and the upcoming New West Summit to be held this October. As former Editor-in-Chief and founder of The Cannabist, Baca made connections with some of the most influential names in marijuana and now he’s putting his experience to work with his communications firm, Grasslands: A Journalism-Minded Agency.

Cannabis journalism has come a long way since the pothead jokes and derision Baca experienced in his early interviews, evidenced by his appearance on The Colbert Report in 2013. Now, Baca is working with some of marijuana’s most powerful people and using his twenty years of journalistic experience to inform and educate.

His podcast “Cannabis & Main” aims to tackle some of the industry’s most pressing issues and add much-needed depth to a space that’s saturated with introductory-level information. In this interview, Baca reveals how things have changed since legalization, what still needs to be done, and what’s next for the blossoming industry.

Cannabis & Tech Today: How have you seen the message of prohibitionists change since recreational marijuana was legalized?

Ricardo Baca: You know, I’ve watched it change dramatically. It’s fascinating, because you’re experiencing history at a breakneck clip, in completely real time. What’s most exciting is that they have to change their message, because their former messaging lacks all credibility now. Real-life experiences in the early regulated marketplaces have proven their original, baseless messages completely inaccurate, and they’ve had to modify it from there.

Now, it has been completely disproven that marijuana is a gateway drug. If you’re looking at true gateway drugs, alcohol is a much more significant gateway drug than marijuana, even though I think the gateway concept has largely been disproven as well. We also know from the Center for Disease Control that more than 35,000 Americans die every year from opioids and heroin and that zero people die every year from cannabis. So the prohibitionists’ messaging has changed drastically over the last few years. I think it’s thrilling because we have actual, real-life data that tells us that their previous messages were total bulls***.

C&T Today: What do you think is missing from cannabis journalism right now?

Ricardo Baca: I would start with data journalism. It’s obviously a very small subset of journalism in general, but I would venture to say most journalists don’t consider themselves great at math. That’s why having a great data journalist is so rare, whether we’re talking about somebody reporting on the energy sector or the cannabis sector.

Somebody doing great work in that sphere is Chris Ingraham, he’s one of the lead drug policy writers for the Washington Post. The work that he’s done has really elevated the game and has really challenged others to do better work.

We’re not seeing nearly enough investigative journalism in this space either. I spent 14–15 months on cannabis pesticides alone. I was thankful to have a team that had my back because I was off doing my own discovery, learning about pesticides and patterns of use. If you try to step in and start writing about pesticides when you know nothing about it, that’s going to show … That story didn’t run until two or three months into my education process, and so it’s understandable that there’s not enough investigative reporting on the cannabis beat. But at the same time, that makes it one of those areas that you’re asking about, that we need more of.

I would very much argue that, even though a lot of these stories will put the industry in a bad light, a lot of these stories will also put regulators in a challenging light. I think so long as we’re challenging the government and challenging the industry, we’re elevating everything for everybody, and that’s, of course, the importance of journalism. It’s holding the powerful accountable, but really, how accountable are you holding them when you can’t dig into a tasty story for a number of weeks, or even a number of months?

C&T Today: What role do you think technology will play in the future of cannabis regulation?

C&T Today: How do you maintain a balance between being supportive of legalization while also presenting an unbiased perspective for your readers?

Ricardo Baca: It’s not that I call myself an activist for legalization of cannabis: I definitely don’t. I would call myself an advocate, but more importantly, I do believe that — and this is new and kind of uncomfortable for me to say, because I spent my life at newspapers where an ethics policy has always prevented me from speaking out publicly — I very much am an activist for sensible drug policy, and that is central to my life’s mission now. That is central to my agency’s mission.

I think this country has perpetuated a broken model of drug policy, and because we are the most powerful country in the world, that piss-poor policy has spread throughout the world, as a result of our power and our weight. I think that’s tragic.

We’ve seen lives ruined by a drug war that had no basis in reality. I think you can still be a credible journalist writing on this beat, while also acknowledging that the drug war was a massive failure, and that we have failed our worldwide neighbors in pushing drug policy that was more rooted and based in fear, manipulation, and lies than drug policy that was based in what we actually know. I think legalization is just the first step in America finally getting drug policy right for the first time in nearly a century.