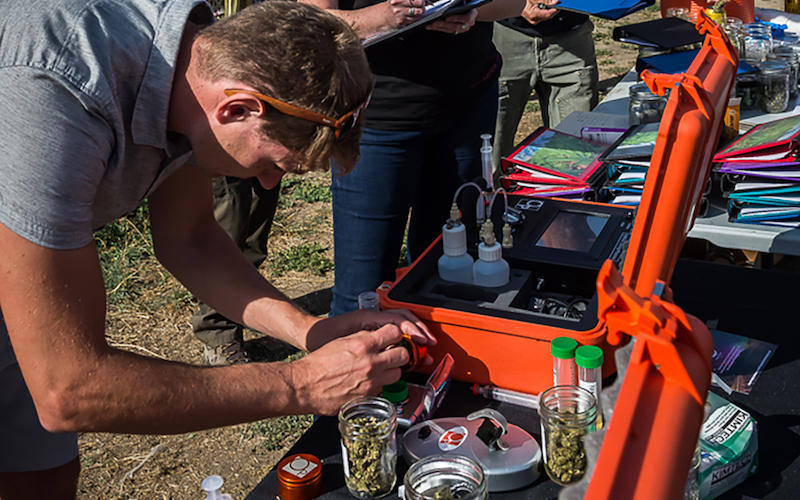 No matter what industry you’re in, product quality is vital to monitor. This is especially true within the booming cannabis world, where data is constantly needed to ensure quality and overall consistency of the substance. However, not every cannabis business has the resources for full lab testing, making Orange Photonics’ LightLab technology fundamental for many startups within the industry. Utilizing the same spectroscopy and chromatography techniques as a laboratory, the portable LightLab helps cultivators measure everything from THC and CBD content to trim and terpenes. In this Innovator Profile, we speak with Orange Photonics Founder/CTO Dylan Wilks and President Stephanie McArdle about their innovative analytical technology and how testing for cannabis differs from testing within other industries. 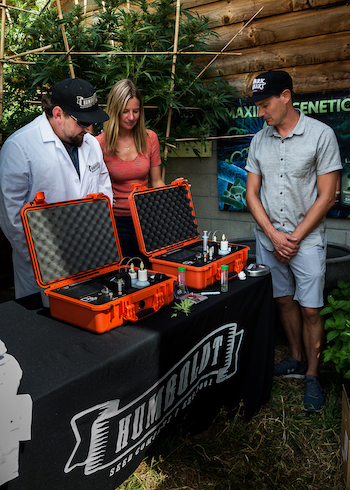 Cannabis & Tech Today: What was the initial inspiration for the LightLab technology?

Dylan Wilks: I’m actually a third generation spectroscopist. My family has been making affordable instrumentation for several decades. We’re a bunch of nerds, for better or for worse. The real inspiration for this particular product was, we had experience with instrumentation and once we learned a little bit about the cannabis states, we found that there was a real need for portable instrumentation that really passes the muster of accuracy.

We originally developed the platform based on a coffee analyzer, believe it or not. We were looking at measuring the components in coffee, but people really felt that this was an art and not a science, and they didn’t want to find out that their beans were this or that or anything. We found it wasn’t a really great market. We were looking around and the cannabis market had a greater need for testing since there’s a psychoactive component to it. That was our inspiration. I always wanted to start my own little company from our family’s knowledge base, and the cannabis opportunity was one that we were able to capitalize on.

C&T Today: When it comes to cannabis testing as a whole, how is it different from testing within other industries such as food and pharmaceuticals?

Stephanie McArdle: Cannabis is extremely different in so many ways, from banking to quality control and analytics. Because the U.S. domestic market is segmented or fragmented state by state, that really leaves a lot of room for significant differences: approaches to regulation, standards, and quality control, for example. You’re looking at pharmaceuticals and there are federal requirements; there are international requirements for importation and exportation, particularly as it relates to patients utilizing the medicine that’s coming out of the pharmaceutical space.

There isn’t any standard on portable liquid chromatography. You have your state-level requirements, where you have to submit your samples to the state-certified lab, but in-house LightLab gives you such an opportunity to work on formulation and really streamline your manufacturing processes and innovate.

On one hand, we’re in an industry, to a certain degree, where we’re pushing for regulation. The states are building that infrastructure to try to accommodate that and make sure it’s a safe market for consumers. On the other hand, once the federal government has that layer in place, then you can have this inflexibility where it relates to compliance. Right now, we’re kind of in this bizarre middle area as regulation standards get developed.

C&T Today: What if LightLab gives a number that doesn’t match with lab results?

DW: That can happen. When it doesn’t match, usually it comes down to sample preparation. Our device requires you to weigh out a sample and add some solvent, shake it up, and then it gets injected into the device. Although that’s relatively simple, there’s still room for error. The scales could not be in calibration, somebody could have done something wrong when they were weighing it or lost some sample, that kind of thing. That’s usually the first thing we’ll look at, sample preparation.

The next thing is sample homogeneity. Obviously, cannabis is a natural product and there’s natural variation. If you grab a single flower from one part of a plant and then another from another part, there could be significant differences. When people are trying to compare or find out that they’re not comparing well, we often try to help them with both the sample preparation as well as ensuring that what they’re sending to the lab actually matches what they’re measuring themselves. I think that homogeneity piece is probably the most challenging, but often surmountable. There’s usually a way to do it in such a way that you can get similar results. We don’t often find this to be a major issue, although sometimes it can be confusing to people.

C&T Today: Do you have any interesting stories of someone receiving their test results and it wasn’t quite what they expected?

DW: I do have one. We had a customer, they were doing some distillation on some cannabis crude. When they sent it to the lab, they were getting weird results reading low THC numbers. And then the lab was saying that they had CBC or cannabichromene. What they were finding in our LightLab is when they ran it, the device would complain that something wasn’t right. It didn’t really fit the model that’s on our device. That usually means there’s something else in there other than cannabinoid or different cannabinoids that we’ve never seen before.

When we looked at the actual raw data, we found that there was something else, another cannabinoid basically that was not CBC, that the LightLab was incorrectly reporting. We could verify that relatively easily by looking at some of the spectrocity data that comes from our device. It kind of sent us down a long road to looking at what this mystery chemical could be. We finally found it by looking at some of the papers that came out of the Nixon era when they did a large study on cannabis, when they really cracked down on it. It’s kind of funny that the Nixon papers are the thing that brought us to the solution since nobody’s really tested a lot of stuff since then.

We found that it was actually a breakdown of a component of THC that we call dihydroxy THC. And it’s interesting that we were able to trace that back to the Nixon papers and find out what it was.