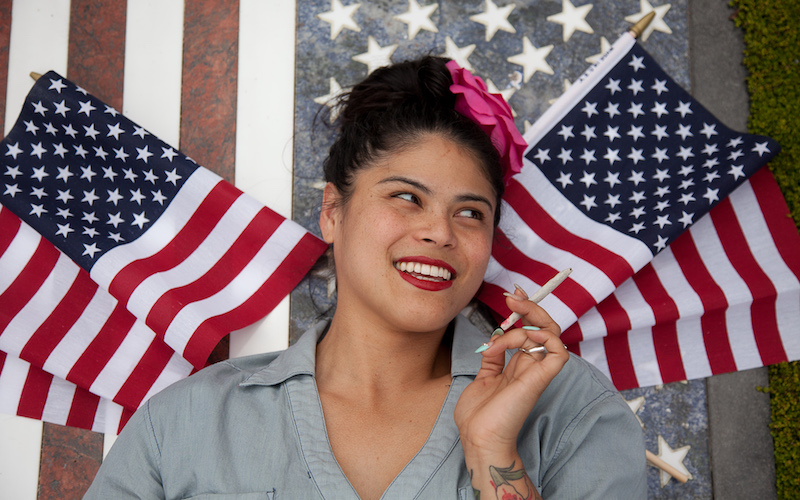 Entrepreneurship and activism can be looked at in a very similar vein. Both take courage, both take determination, and both come from the desire to change and disrupt the established order. Nina Parks is the perfect example of someone who exemplifies the best qualities of both, with her passion and drive showing throughout her ventures. Parks is the founder and CEO of Mirage Medicinal, a cannabis delivery service based out of San Francisco. Additionally, she is the co-founder of Supernova Women, an organization that supports women of color within the world of marijuana entrepreneurship, combining her passions for activism and business.

This passion has clearly been recognized, with Parks being featured in The Huffington Post and Women of Cannabiz, as well as being named on High Times’ “Top 100 Influential People In Cannabis.” In these exclusive quotes, Parks discusses her journey into the world of cannabis activism, the power of social media, and the need for change in cannabis policy.

My brother was arrested for cannabis possession in New York, and he was looking at two to seven years. He had this idea for a delivery service prior to him getting locked up, and he had already filled out all the paperwork. He had the co-op paperwork done, he did the branding, and he built a website. So, with the fear that my brother was going to fall victim to the prison-industrial complex, I dropped everything that I was doing. I just dropped everything and started running this delivery service for my brother. He ended up getting sentenced to a year at Rikers Island.

During the process of me running the delivery service, which was in 2015, California started moving towards adult-use legalization. And as we were reading the legislation, there were actually blocks: things that were making it so people that had former convictions weren’t able to participate, which is crazy. How could you block people from selling weed for selling weed? It seemed really illogical to me. So, I began going to the meetings in 2015 in Oakland because Oakland was the only local jurisdiction that was actually talking about transitioning to adult use.

There, I was able to link up with four other really amazing individuals to co-found an organization for women of color called Supernova Women. We really established ourselves as a group that was trying to support language that was more equitable and also help educate people all over the country on what the potential opportunities were for women of color in the cannabis industry and how there was a need for more representation of women of color as well as people that had been formerly incarcerated to participate in the emerging cannabis economies that are coming up all around the state.

Mirage Medicinal is a home grown brand. We’ve done everything very guerilla-style up until now. We’re going to continue to trailblaze moving forward, learning how to navigate through this new corporate cannabis structure. What’s always going to set us apart is our authenticity and our commitment to providing quality cannabis, you know, because there’s going to be a lot of cannabis flooding the market at a low cost or that is mass-produced. And we are still really trying to provide an experience for our patients and our customers that’s not just a generic cannabis experience, but it’s still rooted in cannabis culture.

I think it’s always really important because it was the propaganda created, you know, by the government and by other special interest groups that gave this wrong perception of cannabis. So it’s really essential that we create new content that helps to re-educate people. I love social media. I think it’s such an amazing way to disseminate information, and it allows for so much creativity as well. I definitely feel like social media and other outlets like blogging are really going to help to normalize cannabis. For us in Supernova, it was essential for us to be able to get our talking points out quickly to other people that were coming to meetings.

We use our social media outlets to be able to coordinate with people, and we’ve seen a lot of movements across the world. The ability to communicate on social media, to gather people in one place, to be able to disseminate talking points, or to give new information that’s being discovered is the easiest way to spread information. Not the most secure way obviously, but the most mass-impactful way.

I’m really proud of all the work that we’ve done so far. I actually recently left the Supernova Women board to focus more directly on the things that are necessary in San Francisco. So, right now I’m facilitating the San Francisco Cannabis Equity Working Group to be able to focus on a real equity program for San Francisco, because San Francisco only started working on it three months before the end of last year. The only thing that we were able to address was equity licensing or permitting, so pathways to permitting. We were not actually able to address the rest of the program piece.
So now a lot of my activist focus is on building out curriculum and getting some coalition building around realist education and realist technical assistance for equity applicants at this time period.

And, my brother’s out of jail now, and he’s working on getting the dispensary up and running. We are actually in line to be able to open up a dispensary here in San Francisco, which is super exciting because we’re from out here, and it means a lot for us actually to be able to get some traction on still being out here since there is a massive exodus of people of color out of the city because it’s just really expensive to live out here.

I’m really hoping with future cannabis policy that systems are put in place first before they start filtering people through them, because right now it’s a detriment for the businesses. People aren’t able to get their permits; they’re being enforced upon, which creates this really horrible environment where people are trying to participate in the legal market but are being fined and slapped with civil penalties and all sorts of things because their paperwork isn’t straight.