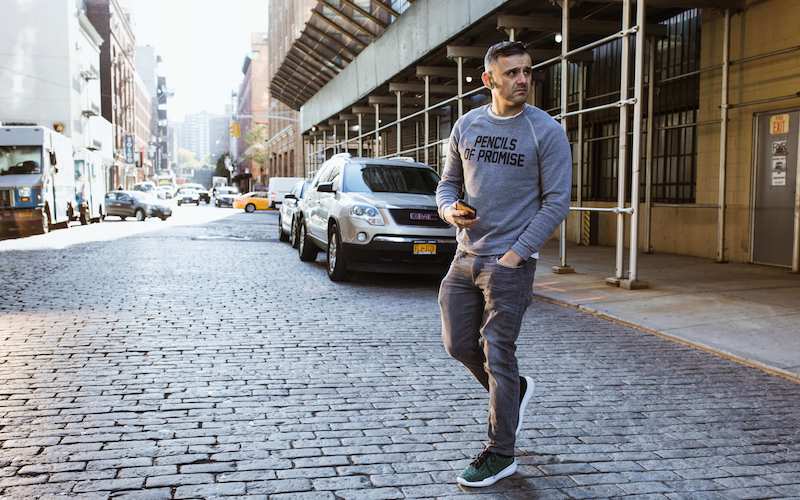 Investing in the cannabis industry seems like quite a lucrative opportunity from the outside looking in. Whether you’re reading the news about the growth of legalization or driving through Denver admiring all the dispensaries popping up, it can certainly feel like you’re missing out on serious profits if you’re not investing in the rising world of marijuana. However, there is definitely a need for an honest voice on the cannabis industry. And Gary Vaynerchuk is just the person to reveal his unbiased opinion on the subject.

A veteran of many industries, including social media, online delivery services, and music streaming, Vaynerchuk understands how to navigate the modern business landscape. However, it’s his experience with alcohol entrepreneurship that gives him an insight into what the future of the cannabis industry might look like. The creator of the webseries WineLibrary TV, the shopping website WineLibrary, and the subscription service “GaryVee’s Monthly Wine Club,” Vaynerchuk sees a number of similarities between the worlds of wine and weed.

Additionally, with his recent purchase of 50 percent of the cannabis branding company Green Street, Gary Vee has officially entered the cannabusiness. We spoke with the business-minded internet celebrity about his advice on investing in the industry, how tech may help to destigmatize the substance, and the challenges of marketing within the space.

Cannabis & Tech Today: What originally sparked your interest in the cannabis industry?

Gary Vaynerchuk: I grew up in the liquor business. Obviously, prohibition and all the shipping laws, I was so affected by what happened in the 30s in America with alcohol. And I couldn’t explain it any other way than intuitively. It is so black-and-white obvious to me how large the cannabis industry will be over the next 30, 50, 70 years. I’m an entrepreneur. And to me it’s a combination of merit and opportunity.

C&T Today: With your experience in the alcohol industry, do you think cannabis could reach that type of mainstream level?

Gary Vaynerchuk: I do believe that. I don’t think it’s tomorrow. We have an administration on a federal level that is not for this movement. And so it’s going to take some time. There’s obviously a ton of stigma. And it took alcohol 40, 50 years.

There’s something in the liquor business that was called “deregulation.” It’s when they stopped imposing minimum markups and the other laws that were heavy-handed. And that happened in the state of New Jersey in 1981. That is almost 50 years after the repeal. So I think a lot of cannabis enthusiasts or speculators are going to end up being just very disappointed in the speed in which this all happens.

But I do believe it will happen. And for me, being somebody who’s a marathon runner, I feel like I’m okay with how the timing works out.

C&T Today: How do you see technology and science playing a role in destigmatizing cannabis?

Gary Vaynerchuk: I think the education of the information and the dissemination of that information will be a huge factor. And so if you think about technology and how it affects media, 20 years ago you’d be at the mercy of three or four media companies. Today, we have the internet. So I think it’s just going to speed up that process.

C&T Today: Tell us a bit about about your work with Green Street.

Gary Vaynerchuk: I met the guys a couple years ago and I really liked their energy. Just shooting the s*** entrepreneurially in L.A. One thing led to another, and they were like, “We’d love to have you be a part of it.” I was like, “Ah, I don’t see how it could work.” And over the course of a year, we created a framework where it made sense for both parties. And I’m just unbelievably ambitious about it and have moved a former senior executive from VaynerMedia over to Green Street. That’s a little scoop for you.

He’s a guy that’s been with me for nine years, leading the account business. Then there was a contract creative that I was going to hire for Vayner Media, but he really was passionate about this space and I U-turned the conversation, so he’s joining. We’ve definitely created a little bit of a dream team.

C&T Today: What is the state of media and marketing in the cannabis space?

Gary Vaynerchuk: The challenges are the Googles and Facebooks have real restrictions, which you respect and understand. We see a lot of opportunity in creating our own media properties and influencer marketing. We will navigate through the world, right?

And more importantly, you’re talking to somebody who lived through years of confusion and limitations in the liquor business, with shipping laws and all that. I’ve grown up in levels of restrictions, and limitations have helped me create a stomach and an appetite to be able to navigate that world.

C&T Today: What advice would you give to entrepreneurs in the cannabis business right now?

Gary Vaynerchuk: The biggest fear I have is that when the big guys are coming in, they start going into, “Well it’s a gold rush, let’s make our money before we can’t.” I’m always a big fan of playing the long game and bringing the most value. To me, my biggest advice is, if you’re in it to make money for the next year or two, then you might as well get out completely. If you’re in it for the next decade, I think there’s a lot of opportunity. So if you’re trying to make money within the next two or three years, then you might as well go figure out cryptocurrency or social media or whatever the hell else gets you excited about short-term economics. If you’re actually in it, and you’re passionate about it and you believe in it, and you want to play out a 10-year window, I think there’ll be enormous opportunity.

C&T Today: As these industries are opening up, it’s really important that these business owners have executional skills and business skills.

Gary Vaynerchuk: I just wanted to say, I feel like people are just unbelievably naïve in what it takes to actually be successful in business. Just being passionate about marijuana is probably the most obvious recipe for not having long-term success. In the same way that I see so many sports agencies fail because they just are “jock sniffers” and they love athletes. They don’t have a business plan.

Smoking a bong for four years of college and now deciding to start a cannabis business is a really bad f***ing idea.

C&T Today: Is there any particular aspect of the business that you think is ripe for growth now?

Gary Vaynerchuk: I think the utilities around them. Don’t forget during the gold rush, who made the most money? The people selling the shovels and the picks. I think if you’re in the scales business, if you’re in the vape products, utilities matter. I’m very high on the accessories of business, especially because a lot of those you can sell on Amazon. You can have a lot more freedom with that.

C&T Today: Do you ever partake in cannabis? What’s your personal stance?

Gary Vaynerchuk: That’s a great question. I think it’s probably the most ironic thing; I’ve never even tried smoking a cigarette. And I’ve never had an edible. So no, I haven’t partaken, but it’s kind of no different than Lou Pearlman, the guy who created the Backstreet Boys and NSYNC. He wasn’t a 14-year-old teenage girl either.

I think, for me, I do have a lot of empathy that may create some level of short-term scrutiny, but in the macro it doesn’t even cross my mind.

C&T Today: Do you have any final advice pertaining to the industry?

Gary Vaynerchuk: For me, the one thing I’d like to say is it’s a marathon. I’m desperate for everybody who’s reading this to understand that in 2037, the grass is going to be unbelievably green. My concern is that everybody thinks they’re going to become rich in 2019, and that’s a bad idea.