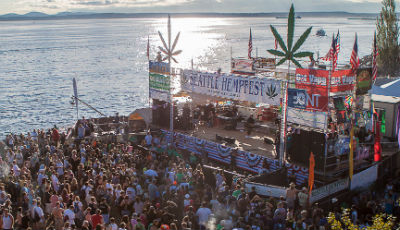 Seattle HEMPFEST, the undisputed King of Protestivals, and the largest cannabis convocation in the world.

Seattle HEMPFEST, the premier flagship event of the global cannabis culture, is celebrating its 27th year.  Hempfest’s crown jewels of achievement include its designation as the largest annual cannabis policy reform event in the world. But that could change with a single event. What is less likely to change is the fact that the Seattle HEMPFEST is the most sophisticated and socially responsible cannabis rally in history, and perhaps the largest annual free speech event in the nation.

The Seattle HEMPFEST enters its 27th year with a volunteer event staff of 1,000, and operating 5 stages of non-stop speakers and music & 400 arts, crafts, food, and informational vendors.

A Seattle Special Event with traditional status, the Seattle HEMPFEST requires hundreds of pages of planning and the city granted permit is obtained after organizers work cooperatively with many city agencies and community stakeholders to guarantee that safety, health, and other community concerns are met.

To enjoy decades worth of photo’s visit our gallery.

We’re proud to usher in our 27th year with you!