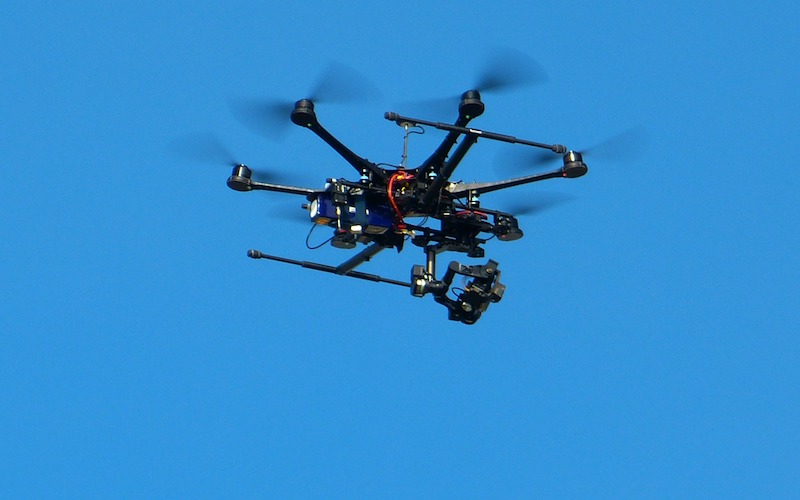 Different verticals of the cannabis industry face unique challenges regarding security measures. As the industry continues to evolve and mature, technology companies pivot to populate these novel operational and compliance needs for cannabis businesses. Looking specifically to outdoor cultivation operations, drone surveillance technology offers some intriguing perks for businesses looking to augment their security protocols with an “eye in the sky.”

Drone technology has advanced significantly over the past decade, with a growing popularity in both public and private sectors. In each of these arenas, drones are regularly used for applications ranging from government security to geographical surveys.

According to Security Magazine, “The commercial use of unmanned aircraft systems (UAS), more commonly known as drones, has exploded over the last few years, and it’s clearly on a trajectory to continue. Its global market is currently worth $2 billion, and that number is estimated to skyrocket to $127 billion in 2020. The Federal Aviation Administration (FAA) predicts that commercial drones will jump from the 80,000 registered units in August 2017 to more than 420,000 units by 2021.” How exactly this exponential growth of drone technology will apply in the cannabis industry still largely remains to be seen, yet certain established market segments can give an intriguing view on potential applications of these novel security measures.

To help us gain a clearer understanding of outdoor cannabis garden security pertaining to drone applications, we reached out to Grant Whitus of Helix TCS, a Colorado-based security firm that is leading the cannabis industry in both technological and operational innovations. Whitus is the Chief Operating Officer at Helix TCS, which is reportedly the “fastest growing ancillary company in cannabis.”

Their growth is reflected in their recent acquisition of the cannabis wholesale portal Cannabase as well as their merger with seed-to-sale and POS software juggernaut Biotrack THC. Whitus is also a veteran police officer in Colorado, making him an expert on all things relating to security. Colorado is a hotbed of innovation in the cannabis industry, reflected by technological innovations in the state’s private sector as well as the progressive compliance standards created by its Marijuana Enforcement Division (MED). As such, Colorado cannabis businesses and MED protocols are largely setting the standards for compliance and security measures across the United States.

Compared to their counterparts with indoor cultivation, outdoor cannabis companies face some real trials with security. This is largely because open-air cannabis gardens don’t have the infrastructure enjoyed by indoor growers relating to electrical demands, locked doors, camera coverage, and scent control. Also, as Whitus points out, outdoor growers “have nighttime to deal with.”

For Whitus’s operations at Helix TCS, they generally “monitor outdoor grows via an extensive camera system and an indoor monitoring station with the addition of a full-time guard presence.” These protocols guarantee that crops are secure while simultaneously ensuring businesses are up-to-speed with compliance standards, both day and night. Whitus also says that a majority of his business concerning outdoor gardens comes from Pueblo, CO, where large commercial grows can range in size up to 36 acres. These industrial-sized cannabis cultivation operations are the ones that can benefit most from drone security.

As mentioned earlier, Colorado MED is largely setting the standards for cannabis compliance and security protocols across the nation. That being said, the most efficient process for evaluating the potential benefits of drone security in the cannabis space is to weigh them against these pre-established guidelines.

According to Whitus, “Colorado MED procedure states that every square foot of a cannabis garden must be visible on camera at all times.” To this end, these regulatory requirements also stipulate that cultivation businesses must use specific camera systems for their security measures. As such, Whitus states, “drone systems are not a necessary feature of state-mandated security measures within compliance programs.” While this does present a drawback for the technology, Whitus does see a value in drones on a more operational front.

Whitus explains that outdoor cultivation business owners “can benefit from drones by utilizing them to holistically monitor operations with a bird’s eye view.” To illustrate, while standard camera designs are necessary for security compliance standards, drones can be added as “another layer of security.” For Whitus, “all types of security are beneficial” and drones are a great tool for business owners and managers to “keep an eye on everything to see if everything is doing what it should.”

Drone monitoring systems also show a great deal of promise in novel cannabis markets that don’t yet have much organization. For example, Whitus and Helix TCS have been doing a good bit of business development in California, where a regulated cannabis market is still in its genesis. Also, a good deal of outdoor cannabis cultivation operations in California are located in extremely rugged terrain.

As such, Whitus feels “drones offer a relatively easy way to monitor these operations.” As a result, while drones don’t meet the compliance demands of states like Colorado, they are a great tool for securing gardens in markets that are still taking shape or that lack in infrastructure. Whitus sees similar applications in places like Jamaica, where “grows may be as large as wheat fields” and businesses simply can’t afford inclusive camera systems that monitor every square foot of operations. Similarly, he states, “it would take a lot of boots on the ground” with security guards to secure these premises. Moreover, he feels that “drones are a very simple technology that anyone can pick up,” making them more attractive in these startup cannabis business scenarios.

Whitus sees drone technology’s real potential in applications relating to operations in commercial agriculture, as opposed to security in cannabis. For him, drones are extremely advantageous for industrial farming operations where such factors as plant health and irrigation systems can be continuously monitored from the sky for inefficiencies. This intriguing appraisal of drone technology in commercial products speaks to a new technology whose applications are still being developed.

As drones present a rather immature segment of the security industry in general, there are still many unanswered questions relating to their viability. On that note, Whitus feels that drone security is an extremely “tough sell to cannabis business owners [who are almost always] on a budget,” especially because it offers no real value pertaining to compliance security mandates. In more mainstream applications, drone security companies also face complications relating to security breaches and information leaks. In a recent scandal, the company DJI Security purportedly compromised a good deal of U.S. intelligence in their drone operations with a potential data leak to China.

Drone security offers an intriguing case study into how more mainstream security technologies could potentially benefit outdoor cannabis grows. Yet, drone technology is a non-essential avenue for security operations in an industry that can’t afford to experiment with additional expenses. As such, rather than an industry staple, drone applications in cannabis will likely be a novelty for a few business owners who see its value in operations.

Kent Gruetzmacher M.F.A. is a Colorado-based freelance writer and the Director of Business Development at Mac & Fulton Talent Partners, a recruiting firm dedicated to the indoor gardening and cannabis space. He is interested in utilizing his M.A. in the Humanities to critically explore the many cultural and business facets of this youthful emergent industry by way of his entrepreneurial projects.

Feature Image by LoggaWiggler from Pixabay

How Artificial Intelligence is Being Applied to Cannabis Security

Data Security & Cannabis: What You Need to Know