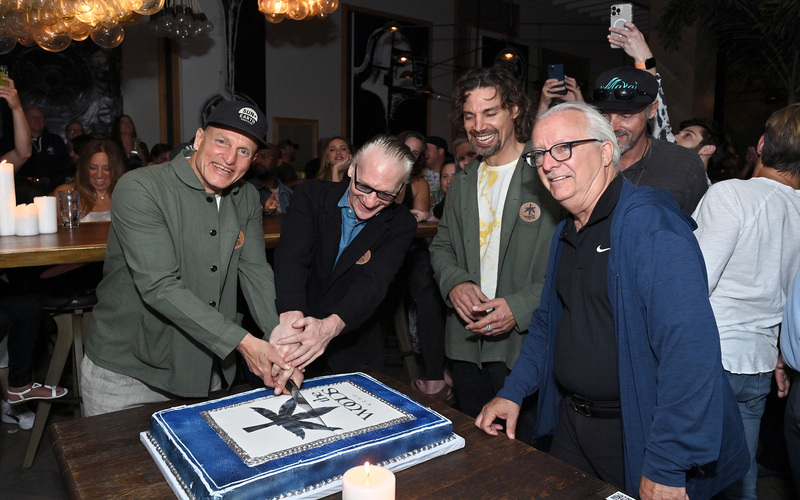 What’s your favorite Woody Harrelson performance? He kept audiences on the edge of their seats in Natural Born Killers and Zombieland, he won the hearts of millions on Cheers and True Detective, and now the iconic actor is bringing even more excitement to Hollywood. Last Friday, Harrelson opened the doors on The Woods, his new West Hollywood cannabis dispensary.

“Thank you to the City of West Hollywood, Genevieve Morrill, and Laurie Meister. We are so excited to open our doors to the community,” Harrelson said during the ribbon cutting ceremony.

The Woods Is Born

The location was an artists’ studio for designer Thomas Schoos when Harrelson and Wheeler first visited years ago. It was there they decided the time was right for their idea to take shape and that Schoos would design the space to fit their vision.

As eager attendees entered the newly opened space, they were greeted by warm, natural colors and high-end finishes well-suited to West Hollywood’s culture. “Our space is made of two distinct halves,” Schoos said.

“There is our freestanding neighborhood bar on the west side and our dispensary on the east side. Each half appeals to somewhat different crowds looking for the same good time,” Schoos added.

The Woods is emphasizing sungrown, organic flower and a return to the “legacy roots” of cannabis culture.

An After Party to Remember

After the opening, select members of the cannabis industry and local community gathered at Norah, an upscale restaurant nearby.

The local sheriff, the Fire Department, and other city officials mingled with high-profile attendees like Ziggy Marley, Bill Maher, and of course Harrelson himself. The intent was reportedly to “bridge the gap” between the community, the dispensary, and the individuals who protect it.

The gathering at Norah offered an open bar, hor’dourves, and an honorary cake cutting.

“Our goal is essentially to return the legacy operators’ work to the forefront before it gets washed out by corporations. The Woods is all about getting back to basics with nature and cannabis,” Wheeler said.

Woody Wins a Willie for Advocacy

The same weekend Harrelson opened his dispensary, he was honored with the “Willie Nelson” award for a lifetime of cannabis advocacy at the Emerald Cup Awards.

Harrelson advocated for the plant long before California legalized cannabis. He’s openly endorsed the healing properties of the herb for years. He famously protested cannabis criminalization by illegally planting hemp seeds in 1996.

Harrelson is also a proponent of regenerative farming practices, which will be reflected in the products offered at The Woods dispensary.

Upon accepting the award, Harrelson reportedly said he hadn’t smoked cannabis in a long time, at least since 4:20 that afternoon.