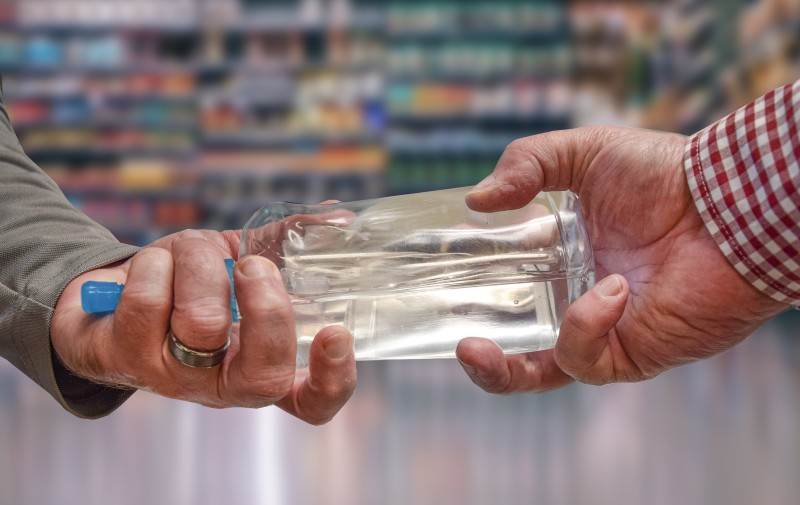 Across the globe, companies are stepping up to make essential goods to battle the coronavirus. In America, hundreds of brands have set aside their normal production routines to manufacture what’s most needed during this time of crisis.

Cannabis extraction companies, in particular, are filling a unique and much-needed niche. The ethanol typically used to refine cannabis concentrates is being repurposed to create hand sanitizer.

A Surplus of Ethanol

Thousands of gallons of FDA-approved 40-B and 3-C denatured ethanol are arriving at these facilities every day. Rather than using them in hemp extraction, some facilities are shifting their priorities to meet the intense demand for sanitization supplies.

Global Cannabinoids, based out of Las Vegas, Nevada, launched their new LLC, Global Sanitizers, on April 1 and is now one of the leading bulk and wholesale suppliers of hand sanitizers in the United States.

Filling the Gaps in Sanitizer Production

The company’s CEO Ryan Lewis noted that the rapid success of the endeavor was a bit of a surprise, “We never expected to become one of the leading bulk and wholesale suppliers of hand sanitizers this quickly, but after analyzing the current supply chain and meeting with our OTC manufacturing partners, it became apparent to us that serious gaps in hand sanitizer production existed.”

Lewis continued: “This presented us with a unique opportunity to fill in the gaps by diverting contracts for ethanol used in the large scale production of hemp, towards the production of hand sanitizers.”

A National Call for Action

The Las Vegas company may be one of the largest producers to shift gears, but they’re certainly not the only one. The Galley, a high-demand cannabis production facility based out of Santa Rosa, California, is channeling their resources into creating “Stop & Sanitize,” their own line of high-quality hand sanitizers.

CEO Ann Holman is passionate about the project, stating in a recent press release, “It is our civic duty to do what we can to save lives.” They’re distributing 25,000 hand sanitizer units to hospitals, retail shops, and grocery stores.

These are unprecedented times, but the nation’s reaction is nothing new. America’s history is rife with examples of people coming together to help those in need. From the Victory Gardens that grew from the shortages of World War I, to the thousands of factories that shifted production to create armaments during World War II, we’re a nation that won’t shy away from a call to action.

Let’s keep these examples of kindness, goodness, and generosity at the forefront of our minds as we continue to sacrifice for one another during this crisis.

Security, Chain of Custody, and The Transportation Manifest

Living in the Age Of Cannabis Delivery on Demand