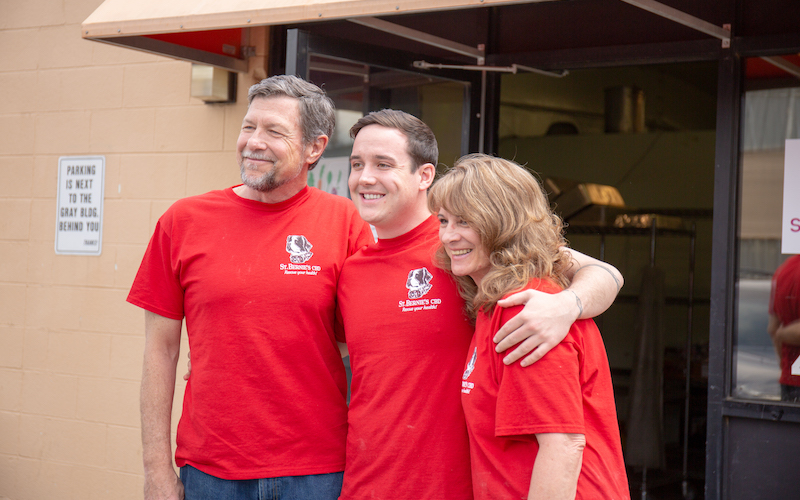 Keeping It In The Family

Earlier this spring, we were invited by St. Bernie’s CBD to get a firsthand look at the production of their unique products. We pulled up to a small facility located in Boulder, Colorado. Walking in, we were greeted by Janelle Wagner, vice president of product development, who introduced us to her husband Mark and son Daniel. Between the three, they make up the workforce of St. Bernie’s CBD. And, while spending a morning with the Wagners, we could tell they wouldn’t have it any other way.

It all started with a simple conversation around a patio one morning. Janelle, an oncology nurse practitioner, was discussing with her husband how her patients had been inquiring about CBD recently, with some utilizing the substance for pain control. As Janelle told us, “It decreases the amount of narcotics they use. They use it for inflammation. One of my patients also has rheumatoid arthritis, so she uses it on her joints. It helps with anxiety, helps them try to get through their chemotherapy treatments, and it helps them to sleep. That’s how our idea was born.” By coincidence, the couple stumbled upon an article on the newly burgeoning CBD sector that was forming in Colorado. This curiosity led to research, specifically wading through the misinformation surrounding CBD.

This research also led to the inspiration for the company’s flagship product: gum. After discovering the small amount of CBD gum on the market, the Wagners began experimenting with creating their own. “Our first venture into making gum, we ordered a make-a-gum kit online. It was a bubblegum kit. It was so sticky and so horrible. Mark noticed that it was made with synthetic rubber,” Janelle explained. Seven months of trial and error and pans stacking up in their sink led to the discovery of a key ingredient in the form of chicle. A Central American product from the Sapodilla tree, chicle is fully biodegradable and digestible. And with that, the mission of using only natural products became essential for the company. 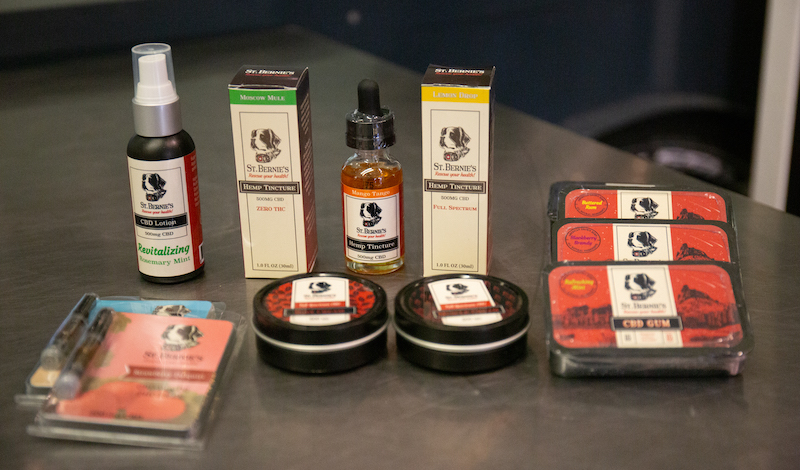 In addition to their natural, sustainable product exclusivity, the Wagners developed a theme that had to do with CBD itself, choosing a St. Bernard (an animal known for rescuing people during avalanches) with the tagline “Rescue Your Health.” Because legend depicts the dog as carrying a keg of spirits around its neck, that very theme can be seen in the various flavors, such as Buttered Rum, Blackberry Brandy, and Moscow Mule.

The Wagners had their mission, their flavors, and their theme. Now they just needed another employee. As Janelle said, “We decided that it would be so much fun to bring our son Daniel into the fold. He’s young. He’s energetic. He’s full of great ideas. We just said to him one day, ‘Hey, we’re thinking of starting a CBD gum company. Would you be interested?’ His response was, ‘Hell yes.’”

In addition to their unique gum, St. Bernie’s expanded their line to be more accommodating to their users. According to Janelle, “A couple people said, ‘Well, I can’t chew gum,’ especially our older customers. And so we decided to expand our line into some different products that deliver CBD.” This includes body and muscle creams, each with 500mg of CBD, and even a variety of vaporizing products. Additionally, St. Bernie’s offers tinctures that continue the “spirit” flavor theme of their gum, with flavors such as Lemon Drop and Raspberry Cosmo.

The Wagners’ creativity and hard work have paid off. In addition to selling their products online, St. Bernie’s offers their products in local Colorado liquor stores, with additional accounts in Michigan and Beverly Hills, CA. The family’s future ambitions for their company? “World domination,” Janelle says with a laugh and a smile.

Wrapping up our time together, the family told us about some upcoming flavors and logos they’ve been playing around with, and they offered us each a tin of their CBD gum. I brought home Fire Breath, the cinnamon whiskey flavor. We packed up our things and got ready to return to Denver. After taking a few photos of the family together outside, the Wagners gave a cheerful goodbye and headed inside, back to work.