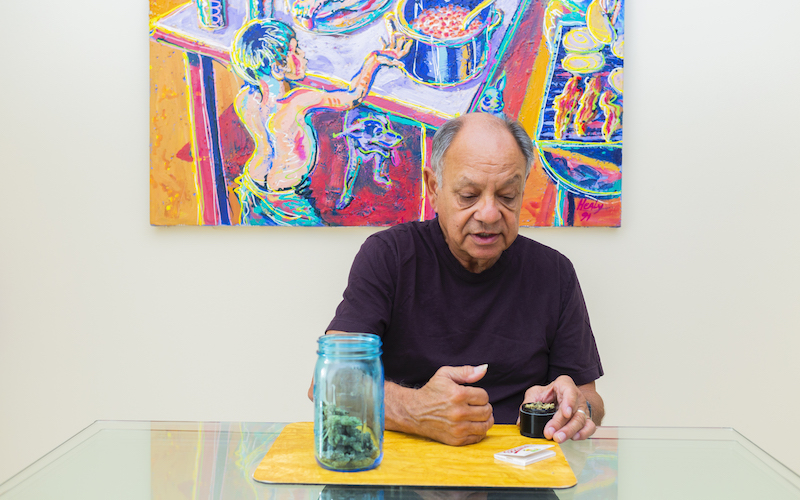 To read Cheech’s full interview, along with the entirety of our Fall 2019 issue, click here!

Cheech & Chong, a comedy duo that defined cannabis to a generation. Their influence has echoed through cannabis culture for decades, bringing the plant to the forefront, showing how harmless and fun it can be. Cheech Marin, donned with one of the most iconic mustaches in history, played a vital role in this cultural movement, portraying the light-hearted side of cannabis to a generation of Baby Boomers.

Now, decades later, he’s gone from cultural icon to entrepreneur, founding Cheech’s Stash, his very own, hand-picked cannabis line. “It will always be good,” claims their slogan. And with Cheech at the helm, it’s easy to believe. We had the chance to sit down with one of cannabis’ most famous celebrities and discuss the current state of cannabis and how it’s changed over the years, how we’ll reach legalization, and how he manages his business.

Cannabis & Tech Today: How have you seen cannabis change over the last few decades?

Cheech Marin: Well it’s been much more accepted into the general populous mostly because of the health benefits that it brings and that’s what we’re going to find out more and more, the health benefits of marijuana, not necessarily the recreational, although that’s a pretty good health benefit as far as I’m concerned. You know, to relax and reduce stress.

It’s more and more accepted by mainstream society. That’s what I’ve found just dealing with past attitudes. I’ll tell you, 39 of 50 states have some form of legalized marijuana, so that should tell you everything you have to know.

C&T Today: Did you ever think you would see a day when cannabis would be legal?

CM: Sure. I mean, it was legal as far as I was concerned. Lenny Bruce used to have this joke – I was a big fan of Lenny Bruce’s – “Man, marijuana will be legal someday because all the lawyers are smoking it.”

And so it’s amazing to change attitudes in some places that are ruled by religious persuasions and other regulations, but it’s a constant battle that goes back and forth. Even for the states that have some form of legalized marijuana, they’re always fighting a battle because the other side wants to undo all of that.

You know, its slow and sure. 39 out of the 50 states have it, so that boulder is rolling down hill right now. You can get in front of it if you want, but I wouldn’t.

To read Cheech’s full interview, get our Fall 2019 issue here!