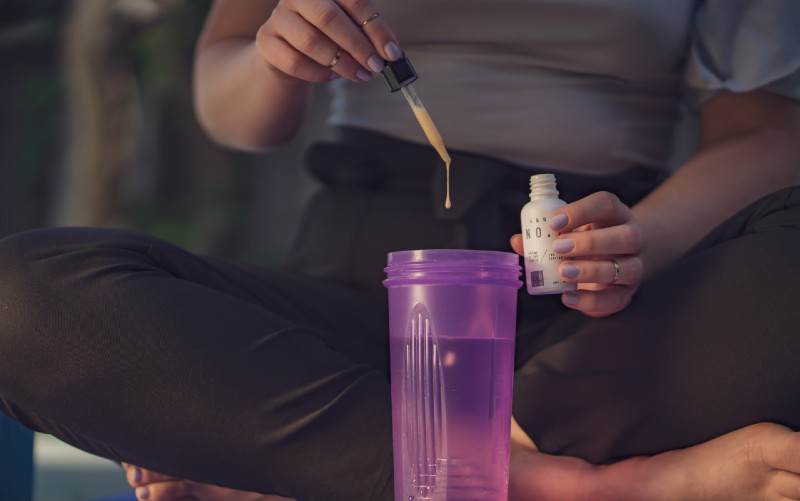 Unless you’ve been living at the bottom of a rock, you’ve likely heard about CBD, the cannabis extract that medical experts now recommend for a broad spectrum of conditions. CBD, or cannabidiol, is one of the many compounds that are derived from the cannabis plant.

There are several health conditions that cannabidiol is touted to treat, including;

Among the many health benefits of CBD is its potential to treat endometriosis.

Endometriosis refers to a painful disorder that occurs when tissues that resemble the tissues that usually line the endometrium (the inside of the uterus) grow outside the uterus.

As these endometrial-like tissues grow, they mimic the actions of real endometrial tissues. That includes thickening, breaking down, and bleeding each time a woman experiences their menstrual cycle.

But unlike the normal endometrial tissues, endometrial-like tissues are often unable to exit the body. Instead, they get trapped, where they can cause excruciating pain. The pain is usually more severe during menstruation.

Endometriosis affects nearly all of a woman’s reproductive organs, from the fallopian tubes to the ovaries, and even the tissues that line the pelvis. The situation usually worsens if the ovaries are involved, as the condition often leads to the formation of ovarian cysts, known as endometriomas.

Research suggests that between 30 and 50 percent of endometriosis patients develop infertility. You definitely don’t want to be part of these worrying statistics.

The exact cause of this debilitating condition remains idiopathic. However, the following explanations have been suggested as possible causes for endometriosis.

Pelvic pain during menstruation is the most common symptom of endometriosis. Besides, you may also experience dysmenorrhea, intermenstrual bleeding, pain during intercourse as well as pain during bowel and bladder movements.

Any of the above symptoms is reason enough to visit a doctor. If you don’t, you could suffer from several complications, the most distressing ones being infertility and ovarian cancer. 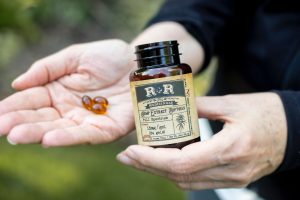 CBD is available in a variety of forms ranging from flower to easy-to-digest capsules. Photo by R+R Medicinals on Unsplash.

However, experts now tout cannabidiol as the safer and more effective alternative to these conventional treatment options.

The main reason CBD is recommended for endometriosis is that it comes with close to zero side effects compared to conventional NSAIDs drugs like Advil.

Secondly, there are many ways to administer it. You can drip CBD tinctures beneath your tongue, vape CBD oil, or apply CBD-containing creams.

You can even do yourself one better by going for CBD edibles. Indeed, edibles are the most convenient way of integrating CBD into your health and wellness routine. And with many brands now selling CBD edibles online, access to CBD products is easier than before.

How Does CBD Work for Endometriosis?

According to research, the following are the various ways that CBD deals with endometriosis;

The body is naturally programmed to identify and destroy potentially-dangerous cells, a mechanism known as apoptosis. And the body’s system of endogenous cannabinoids, also known as the endocannabinoid system, plays a significant role in apoptosis. 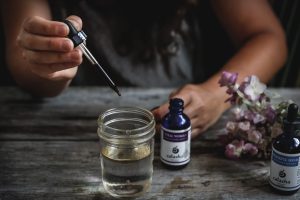 Tinctures are a fast-acting option for ingesting CBD. Drops can be placed under the tongue or added to beverages. Photo by R+R Medicinals on Unsplash.

Now, it’s observed that apoptosis is impaired among endometriotic patients. In simpler terms, your body’s endogenous cannabinoids are incapable of destroying aberrant cells; hence, they require a boost.

Consuming CBD introduces more cannabinoids into your system while also enhancing the activity of CB1 and CB2 receptors. As a result, they prevent cell multiplication.

Besides, CBD blocks the activation of receptors responsible for the migration of endometriotic cells, such as the GPR18 receptor. Therefore, it prevents these cells from migrating to other parts of the body.

Researchers have also discovered that CBD could help inhibit endometriotic vascularization. In essence, the substance prevents these cells from developing a network of blood vessels that would see them receive nutrients and reproduce.

Multiple studies conducted on the potential for CBD and THC to inhibit vascularization have yielded positive results.

But pain relief is arguably the most obvious benefit of CBD for endometriosis patients. As we already pointed out, pain is the most distressing symptom of endometriosis.

And it could be worse if you have a deep-infiltrating endometriosis, which is a more severe form of the condition where the endometrial cells embed themselves deeper into your abdominal tissues.

Your endocannabinoids regulate the growth of nerves. And the endocannabinoid receptors, particularly the CB1 receptor, are expressed on nerves which innervate the endometriotic lesions.

If you consume a CBD-based product, particularly one that contains THC, the cannabinoids in the product act by activating the CB1 receptor, thereby preventing innervation.

So, when it comes to relieving endometriosis pain, both CBD and THC are involved, though they act on the pain quite differently. While THC is more effective at activating the CB1 receptors, CBD alleviates pain by desensitizing various pain receptors, such as TRPV1.

Fortunately, you can enjoy the compounded effects of both cannabinoids by using a full-spectrum cannabis product and as per my experience these CBD pills were the best for overall symptom management.

Endometriosis is a debilitating condition. But it’s reassuring to know that CBD helps treat the symptoms while also preventing the condition from escalating.